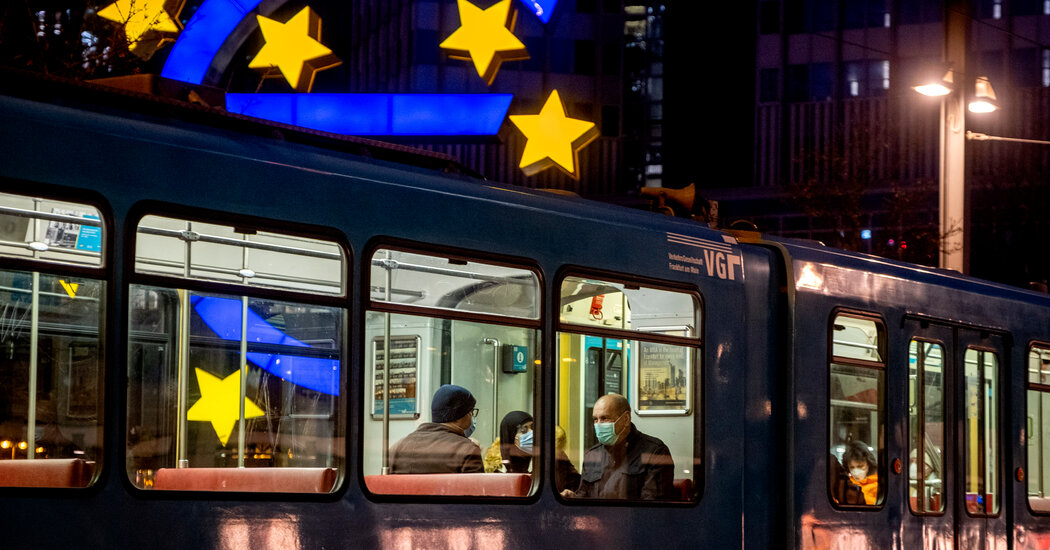 The European Central Bank moved Thursday to counteract market forces that are driving up borrowing costs worldwide, saying it would speed up its purchases of government and corporate bonds to make sure that credit in the eurozone remained cheap.

The action signaled that the bank was worried less about inflation than about the economic distress caused by the pandemic and the likelihood that the eurozone was in recession.

The bank had earlier allocated 1.85 trillion euros, or $2.2 trillion, to fight the effects of the pandemic and keep borrowing costs low. That sum remains unchanged, but the bank will now buy bonds “at a significantly higher pace than during the first months of this year.”

Interest rates in the bond market have been rising in recent weeks because investors are worried that inflation could rise when growth bounces back. Investors have been less willing to buy bonds at the same exceptionally low rates as before.

Underlying price pressures remain subdued in the context of weak demand and significant slack in labor and product markets,” Ms. Lagarde said after a meeting of the bank’s Governing Council. She added that she expected the eurozone economy to shrink in the first quarter of 2021, the second quarterly decline in a row, because of the slow pace of vaccinations and extended lockdowns.

Prices in the eurozone rose at an annual rate of 0.9 percent in March after falling for the last five months of 2020. Some economists expect prices to rise further as the effects of President Biden’s $1.9 trillion stimulus plan spill over into Europe.

Ms. Lagarde said the Governing Council had not taken the U.S. stimulus plan into account because it had not yet been signed into law. Mr. Biden signed the bill on Thursday.

The action announced on Thursday sends a strong signal to financial markets, which have been testing the central bank’s commitment to keep lending costs low in the eurozone while governments, corporations and individuals struggle through the pandemic.

Ms. Lagarde said on Thursday that she was “on the same page” with the activists in many ways, but added, “We don’t think this is the necessary way to conduct a dialogue.”

MIAMI--(BUSINESS WIRE)--Intelli Smart Homes, the leading smart home technology company, has been recognized as one of America’s fastest-growing … END_OF_DOCUMENT_TOKEN_TO_BE_REPLACED

Customers outside a Walmart store in Torrance, California, US, on Sunday, May 15, 2022. Walmart Inc. is scheduled to release earnings figures on May … END_OF_DOCUMENT_TOKEN_TO_BE_REPLACED

The past few years have been brutal on homebuyers' budgets. Would-be buyers have been priced out of some of the most desirable neighborhoods thanks to … END_OF_DOCUMENT_TOKEN_TO_BE_REPLACED