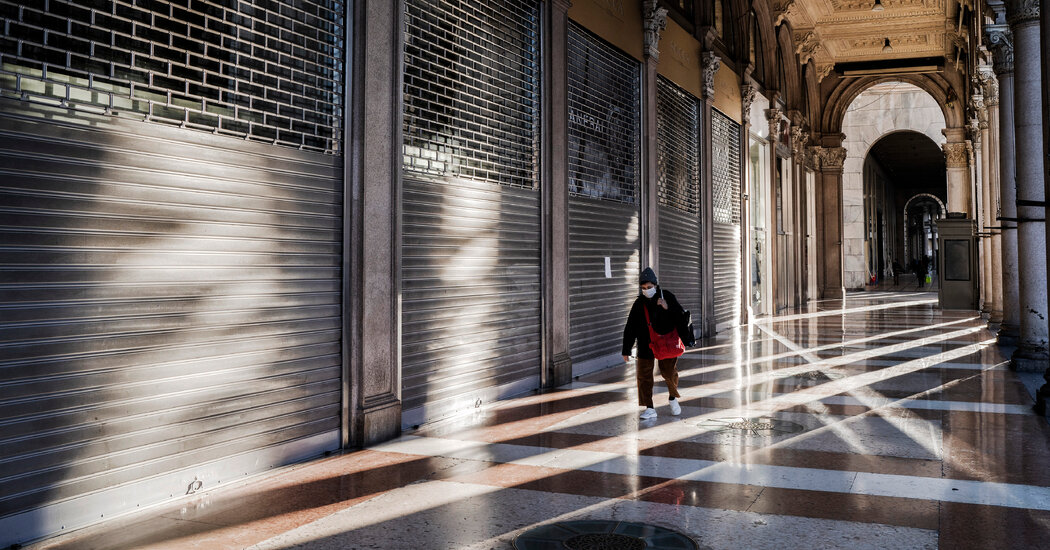 European authorities will release data on Friday that is widely expected to show another economic downturn over the first three months of the year as the still-raging pandemic has prompted governments to extend lockdowns.

Coming a day after the United States disclosed that its economy expanded 1.6 percent over the same period — a robust 6.4 percent annualized rate — the expected European contraction presents a contrast of fortunes on opposite sides of the Atlantic.

Propelled by dramatic public expenditures to stimulate growth, as well as swift increases in vaccination rates, the United States — the world’s largest economy — expanded rapidly during the first months of 2021. At the same time, the 19 nations that share the euro currency were likely caught in the second part of a so-called double-dip recession, reflecting far less aggressive stimulus spending and a botched effort to secure vaccines.

But economic growth figures represent a snapshot of the past, and recent weeks have produced encouraging signs that Europe is on the mend. Even as Covid-19 spreads alarmingly in major economies like Germany and France, factories have revived production, while growing numbers of people are on the move in cities.

In depriving households of the opportunity to spend, the pandemic has yielded savings — money that may surge into businesses as fear of the virus fades.

Most economists and the European Central Bank expect the eurozone to expand at a blistering pace over the rest of 2021, yielding growth of more than 4 percent for the full year.

International Monetary Fund. That compares to 10 percent in Germany.

But Europe also began the crisis with far more comprehensive social safety net programs. While the United States directed cash to those set back by the pandemic, Europe limited a surge in unemployment.

“Europe has more insurance schemes,” said Kjersti Haugland, chief economist at DNB Markets, an investment bank in Oslo. “You don’t fall as hard, but you don’t rebound that sharply either.”

AUSTIN, Texas--(BUSINESS WIRE)--As the first multifamily management company to be recognized in the Public Relations and Marketing Excellence Awards, … END_OF_DOCUMENT_TOKEN_TO_BE_REPLACED

There have been whispers of cooling housing and rental prices in the San Francisco Bay Area, but that hasn't yet translated into practical, noticeable … END_OF_DOCUMENT_TOKEN_TO_BE_REPLACED

Cars pass in Independence Square at twilight in Kyiv, Ukraine, Monday, Oct. 31, 2022. Rolling ... [+] blackouts are increasing across Ukraine as the … END_OF_DOCUMENT_TOKEN_TO_BE_REPLACED