Netflix projects dominated this year’s Oscars, which will be handed out on Sunday evening. But for all the success across features, documentaries, animation and short films, the company’s executives insisted this week they still have a lot to learn about making movies, especially for a worldwide audience of dozens of markets and wildly divergent tastes.

The company has been making original feature-length projects for only a few years, and still is finding challenges, like finding the right kinds of projects that can succeed in given markets, with the potential to break out.

“Where can we find the story you talk about even more?” Co-CEO Reed Hastings said. “Where can we improve our choosing, the stories that are recommended to you? Just quarter by quarter, we’re learning more on each of those issues.”

The pandemic only made that learning process more complicated, forcing the delay of numerous projects originally slated for this spring. Now, for instance, action films starring Chris Hemsworth and Ryan Reynolds will be pushed into the fall. But when those movies do arrive, Hastings said he expects audiences will still be there in droves to watch.

“We’re not changing the way we make films, but we are changing the way they (audiences) watch films,” Sarandos said. “We had 17 different films with an (Oscar) nomination this year. We can do these very large-scale action films at the same level they’re produced for the theater.”

Audiences appear to be lapping it up. Indeed, one way to approximate fan interest is to look at the biggest YouTube trailers for Netflix projects. This week’s numbers come courtesy of Tubular Labs, and show a slate that would fit comfortably with anything Hollywood studios have done the past decade:

The most-watched trailer, The Mitchells vs. The Machines, is the latest animated feature from Oscar-winning producers Phil Lord and Christopher Miller (The Lego Movie, Spider-Man: Into the Spider-Verse). It’s about a dysfunctional family trying to save the human race when all their smart devices and machines rebel. It debuts April 30.

The two other shows on the list are big-budget episodic series from big names in fantasy and sci-fi, including the first project from Mark Millar (Kingsman: Secret Service, Kick-Ass), and the on-screen translation of Leigh Bardugo’s popular book series.

Feature-length projects seemed on their way out in a pandemic-crimped era where streaming has become far more popular, theaters were largely shut, and episodic series are seen across the industry as a way to keep audience coming back.

Big Movies Can Thrive In Streaming Too

But movies have proved their appeal in the streaming-only world too. The controversial success of WarnerMedia’s day-and-date releases of Warner Bros. films in theaters and on HBO Max showed the two platforms can co-exist, at least during pandemic times (though Warner is going to a modified version of the old way of doing things in 2022).

Netflix has had some success with the small films that typically appeal to Oscar voters over the past three awards seasons, including Alfonso Cuaron’s Roma, which won three Oscars in 2019, including best director, cinematography and foreign language film.

This year, the company has two best picture nominees – Mank and The Trial of the Chicago 7 – and two best animated features – A Shaun of the Sheep Movie: Farmageddon and Over the Moon.

And some of the biggest viewership on Netflix has been for its feature-length action and science-fiction projects, at least according to few data bits the company provides on viewership. That audience interest should continue even after the pandemic subsides, executives said.

Asked during this week’s earnings call whether the company takes a different approach to finding and creating feature films compared to episodic projects, Sarandos said the approaches are “not dissimilar. It’s just that people very diverse tastes. Ttat’s why we go at it from very different angles.”

Hastings noted the company spends “a lot more on series than on films. That (film spending) will grow as our budget grows.”

The company invests time and money in new genres, such as animation, or children’s programming, or reality shows, and then builds more programming as it leans the sector and fan expectations, Hastings said.

One helpful addition to the movie pipeline may be the just-announced deal for direct-to-streaming projects built on Sony’s substantive library of films and TV shows.

Much more attention was paid in initial reports to the part of the deal giving Netflix access to new Sony films as they come into the Pay 1 home-entertainment window.

That part of the deal was valued at as much as $250 million a year, three times what Sony was getting previously from Lionsgate streaming service Starz. (Disney, which lost out in the bidding, cut a deal this week for the same films in the Pay 2 window).

But Sarandos focused instead on the opportunity to make new projects with Sony that it can distribute around the world for years to come. The Pay 1 deal only covers the U.S. market, for the next five years, Sarandos said.

“We’re going to be producing global original films from the Sony library,” Sarandos said. “It gives us access to IP we wouldn’t otherwise have. The domestic Pay 1 deal adds to that…and complements it.”

It also is busy buying and making movies in markets around the world, instead of just relying on projects coming out of the Sunset Boulevard offices in Hollywood. That helps ensure various markets see home-grown projects they will enjoy.

“It’s a product-market fit,” Sarandos said. “It’s a bit of a trial and error at the beginning as we roll them out. We started with none, and now are producing in most countries in the world. Our confidence is from the success we’ve had to date.”

In Asia, Sarandos said the company has spent $500 million on episodic series and movies from Korea, home to the reigning Oscar Best Picture winner (Parasite).

“They play really well around the region and occasionally we have a global hit,” Sarandos said.

In similar fashion, the company has invested successfully in Japanese anime, which also tends to travel well worldwide.

“We’ve had enough success in Korean and Japanese markets for you (analysts) to think of them like (major markets) Germany or England,” Hastings said.

But the company still has a lot of work to do in India, where it only recently scaled up its slate of home-grown projects to more than 40.

“With India, we’re still figuring it out,” Hastings said. “I’d say that’s more of a speculative investment than Korea or Japan, though five years ago, those (markets) were speculative and now they’re doing great.”

Learning How To Succeed In India

Success in India will be vital for Netflix’s long-term growth, especially because it doesn’t operate in China. Hastings previously has said India could provide Netflix as many as 100 million subscribers eventually (worldwide, it now has 208 million).

Competition in the country has ramped up considerably since those comments however, from both international players such as Amazon AMZN and Disney and from home-grown operators.

Cracking India is not just about making local movies and series either. The country has an estimated 300 million people in its middle class, but about 800 million people have a cell phone, according to recent estimates, and many consumer entertainment on their phone.

Fine-tuning marketing and subscription plans, and partnering with wireless carriers such as Reliance Jio are all part of the process of building a base in the Subcontinent.

“We recognize we don’t know a lot compared to how much we’re going to learn,” said Greg Peters, the company’s COO and Chief Product Officer. “We’re trying to be innovative and push and experiment.”

The company has only been making original content for about nine years, Hastings said. Executives rightly figured out that at some point Hollywood studios would stop just cashing license checks and keep their series and movies to themselves. It took awhile for Hollywood to do that (in fact, it continues to some extent, as shown by the deals Sony deals), but now just about every Hollywood studio planning to launch a streaming service has done so.

Netflix started with episodic series as it began pivoting away from what we can delicately call O.P.P., or Other People’s Programs.

The company’s first homegrown hit was House of Cards, an adaptation of a dark British political thriller series that also was available on Netflix. The American remake scooped up Emmy and Golden Globe nominations and a dozen wins, among other accolades.

Now, with significant investments in sectors far beyond episode dramas and comedies, it has pushed into animation, reality shows, documentaries, children’s programing and short films.

The real estate market seems to have a split personality.On the positive side for homebuyers, the number of properties for sale shot up by a … END_OF_DOCUMENT_TOKEN_TO_BE_REPLACED

Kim Tae-Ri plays a gun-toting time traveler in 'Alienoid.' Well Go USA Director Choi Dong-hoon likes a challenge. That much is apparent in his latest … END_OF_DOCUMENT_TOKEN_TO_BE_REPLACED 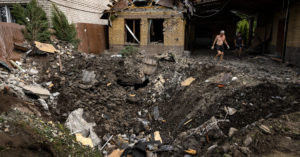 A Ukrainian artillery unit firing from a frontline position near the town of Bakhmut on Wednesday.Credit...David Guttenfelder for The New York … END_OF_DOCUMENT_TOKEN_TO_BE_REPLACED