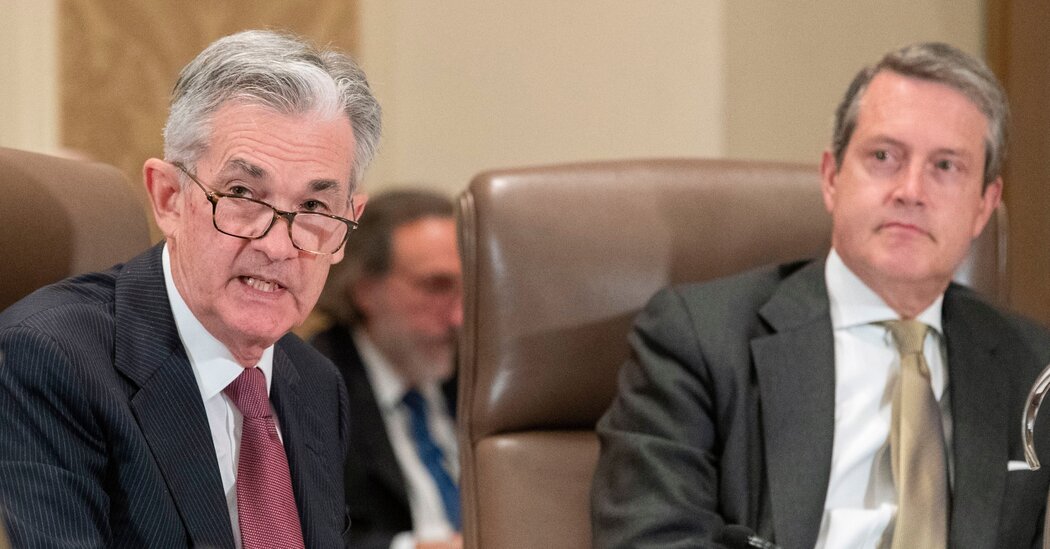 Federal Reserve officials were optimistic about the economy at their April policy meeting, and they began to tiptoe toward a conversation about dialing back support for the economy, as government support and business reopenings fueled consumer spending and paved the way for a rebound.

Fed policymakers have said they need to see “substantial” further progress toward their goals of inflation that averages 2 percent over time and full employment before slowing down $120 billion in monthly bond purchases. The buying is meant to keep borrowing cheap and bolster demand, hastening the recovery from the pandemic recession.

Officials said “it would likely be some time” before their desired standard was met, minutes from the central bank’s April 27-28 meeting released Wednesday showed. But they noted that a “number” of officials said that “if the economy continued to make rapid progress toward the committee’s goals, it might be appropriate at some point in upcoming meetings to begin discussing a plan for adjusting the pace of asset purchases.”

Confusing, and at times conflicting, data released since the April 27-28 gathering could make the Fed’s assessment of when to dial back support — or even to start talking about doing so in earnest — difficult. A report on the job market showed that employers added far fewer jobs than expected. At the same time, an inflation report showed that an expected increase in prices is materializing more rapidly than many economists had thought it would.

The Fed has also held interest rates near-zero since March 2020, in addition to its bond purchases.

Officials have been clear that they plan to slow down bond buying first, while leaving interest rates at rock bottom until the annual inflation rate has moved sustainably above 2 percent and the labor market has returned to full employment.

Markets are extremely attuned to the Fed’s plans for bond purchases, which tend to keep asset prices high by getting money flowing around the financial system. Central bankers are, as a result, very cautious in talking about their plans to taper those purchases. They want to give plenty of signal before changing the policy to avoid inciting gyrations in stocks or bonds.

Even before the recent labor market report showed job growth weakening, Fed officials thought it would take some time to reach full employment, the minutes showed.

“Participants judged that the economy was far from achieving the committee’s broad-based and inclusive maximum employment goal,” the minutes stated. Officials also noted that business leaders were reporting hiring challenges — which have since been blamed for the April slowdown in job gains — “likely reflecting factors such as early retirements, health concerns, child-care responsibilities, and expanded unemployment insurance benefits.”

When it comes to inflation, Fed officials have repeatedly said they expect the ongoing pop in prices to be temporary. It makes sense that data are very volatile, they have said: The economy has never reopened from a pandemic before. That message echoed throughout the April minutes, and has been reiterated by officials since.

“We do expect to see inflationary pressures over the course, probably, of the next year — certainly over the coming months,” Randal K. Quarles, the Fed’s vice chair for supervision, said during congressional testimony on Wednesday. “Our best analysis is that those pressures will be temporary, even if significant.”

“But if they turn out not to be, we do have the ability to respond to them,” Mr. Quarles added.

It’s a property that offers a unique open floor plan—plus a hot tub with a view.“It was a Methodist church located in a historic little area of St. … END_OF_DOCUMENT_TOKEN_TO_BE_REPLACED