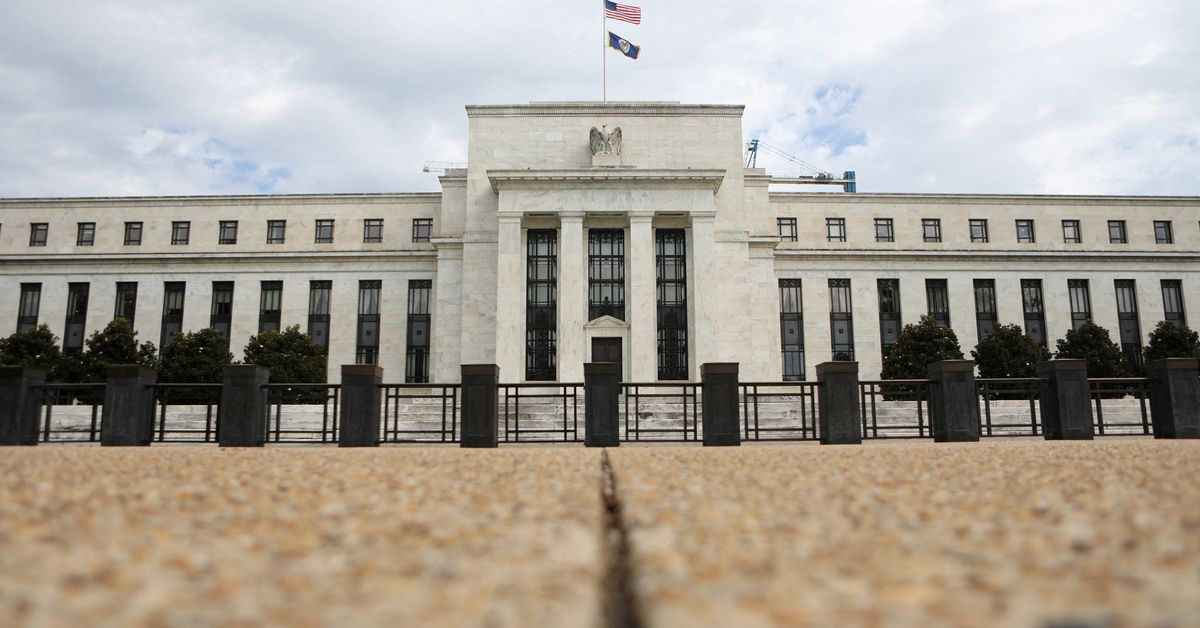 BENGALURU, Oct 25 (Reuters) – The U.S. Federal Reserve will go for its fourth consecutive 75 basis point interest rate hike on Nov. 2, according to economists polled by Reuters, who said the central bank should not pause until inflation falls to around half its current level.

Its most aggressive tightening cycle in decades has brought with it ever bigger recession risks. The survey also showed a median 65% probability of one within a year, up from 45%.

Still, a strong majority of economists, 86 of 90, predicted policymakers would hike the federal funds rate by three quarters of a percentage point to 3.75%-4.00% next week as inflation remains high and unemployment is near pre-pandemic lows.

Results in the poll are in line with interest rate futures pricing. Only four respondents predicted a 50 basis point move.

“The front-loading of policy rate tightening we have seen up to now has been aimed at getting to a positive real fed funds rate at the start of 2023,” said Jan Groen, chief U.S. macro strategist at TD Securities, referring to rates adjusted for inflation.

“Instead of a pivot, in our view, the Fed is signaling that they foresee shifting from front-loading up to December, towards more of a more grinding pace of hikes from then onward.”

The funds rate was expected to peak at 4.50%-4.75% or higher in Q1 2023, according to 49 of 80 economists. But the risks to that terminal rate were skewed to the upside, according to all but one of the 40 who answered an additional question.

Fed officials have begun contemplating when they should slow the pace of rate hikes as they take stock of their impact given it takes many months for any rate move to take effect.

Asked around what level of sustained inflation the Fed should consider pausing – currently running above 8% according to the consumer price index (CPI) – the median from 22 respondents said 4.4%, according to that measure.

The Fed targets the personal consumption expenditures (PCE) index, but the survey suggests roughly half the current rate of inflation ought to be a turning point. PCE inflation was forecast above target until 2025 at least.

“Fed officials have indicated that pausing is only possible after ‘clear and compelling’ evidence inflation has moderated,” said Brett Ryan, senior U.S. economist at Deutsche Bank.

“With the Fed continuing its aggressive tightening to rein in persistent inflation, we expect a moderate recession likely to begin in Q3 next year as the real growth would dip negative and the unemployment rate will rise substantially.”

Next year the economy was expected to expand just 0.4% – a forecast that has been downgraded in each consecutive monthly Reuters poll since the Fed first started hiking in March – after growing 1.7% on average this year.

The unemployment rate was expected to average 3.7% this year before rising to 4.4% and 4.8% in 2023 and 2024, respectively, an upgrade from the previous poll but significantly lower than the highs seen in previous recessions.

Still, the chances of a sharp rise in unemployment in the United States over the coming year were high, according to over half of respondents to an additional question, 23 of 41. Eighteen said the chances were low.

(For other stories from the Reuters global economic poll:)

AUSTIN, Texas--(BUSINESS WIRE)--As the first multifamily management company to be recognized in the Public Relations and Marketing Excellence Awards, … END_OF_DOCUMENT_TOKEN_TO_BE_REPLACED

There have been whispers of cooling housing and rental prices in the San Francisco Bay Area, but that hasn't yet translated into practical, noticeable … END_OF_DOCUMENT_TOKEN_TO_BE_REPLACED

Cars pass in Independence Square at twilight in Kyiv, Ukraine, Monday, Oct. 31, 2022. Rolling ... [+] blackouts are increasing across Ukraine as the … END_OF_DOCUMENT_TOKEN_TO_BE_REPLACED