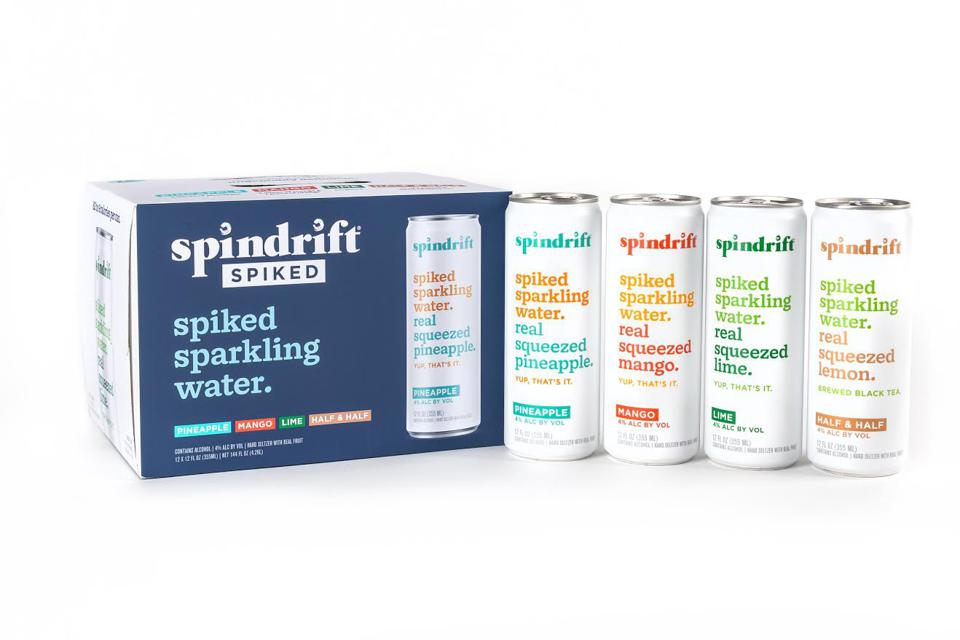 If there’s any white space left in the remarkably frothy hard seltzer market, Spindrift founder Bill Creelman seems the most likely to locate it.

Available in four flavors — Mango, Lime, Pineapple and Half & Half — the new line will hit the market in mid-April, marking Spindrift’s first foray into the alcohol sector.

Creelman, who has spent the last decade convincing drinkers to pay more for nonalcoholic sparkling water made with real fruit, believes he can replicate that success in the $4.3 billion hard seltzer segment while simultaneously ushering in an entirely new set of customers to the category.

“We are 95% accretive to the nonalcoholic category, which is worth about $4 billion today,” he said. “It is our belief that the vast majority of drinkers who will eventually be Spindrift Spiked consumers are not shopping in this category right now.”

According to Creelman, Spindrift reached out to its community of so-called “Drifters” to understand more about their hard seltzer buying habits before diving into a sector that has become littered with hundreds of copycat brands.

“They really are not enamored with what is on the market today,” he said. “What we see are people shopping indiscriminately across different brands, and they are not looking to make an emotional connection with a brand. We are taking it somewhere very different.”

Indeed, Spindrift will attempt to establish that connection with drinkers, and sell them a more expensive hard seltzer by promoting the fact that its Spiked line is “better-for-you” because it is made with real fruit and has color, unlike top-sellers White Claw (Mark Anthony Brands) and Truly (Boston Beer Company) which are clear and rely on “natural flavors” for taste.

“This is an expensive product to make, and we don’t typically sell on price,” Creelman said, noting that 12-packs of Spindrift Spiked will retail for about $25.

Spindrift’s premium pricing strategy has worked well in the nonalcoholic beverage aisle, where its 8-packs cost upwards of $6.99, versus roughly $5.49 for 12-packs of LaCroix and similar sparkling water products.

And while higher pricing hasn’t stunted Spindrift’s growth — sales swelled 84% to more than $72 million in 2020 — Creelman said he anticipates some pushback from alcohol retailers.

“We heard it when we entered a $3.99 category with a $5.99 product,” he said. “Our perspective is that if we make a great product, and price it fairly, the consumer will be there.”

According to Goldman Sachs , sales of hard seltzer are projected to reach $30 billion by 2025, leaving plenty of opportunity for Spindrift and other producers to cut into White Claw and Truly’s stranglehold on the category. Those two brands have combined for more than $3.2 billion in sales (roughly 75% of the market) over the last 52 weeks, according to Nielsen IQ.

To gain share, emerging players will need to distinguish themselves from a never-ending pile on of brands that do little to differentiate from one another.

A majority of the hard seltzers that have been released in recent years are produced from a sugar base, packaged in 12 oz. slim cans, contain 100 calories, and check-in at 5% ABV.

In terms of taste, mixed berry, black cherry, grapefruit, lime and mango flavors seem to be the most common.

While those companies will no doubt get the majority of distributor and retailer mindshare, and dominate cooler space, there are a handful of new brands beginning to stand out in a sea of sameness.

According to Nierman, the hard seltzer market has become saturated with products that are too sweet and have “fake aromas.”

“A lot of these brands just don’t sit well in your stomach,” he said. “Yerbuzz is lighter, lower in carbs, and has no sugar.”

By using yerba mate into the production process, Nierman — who previously served as a brewer at hard kombucha maker Boochcraft before launching his own business — was able to create a product that is more balanced and contains less residual sweetness, he said.

“Most hard seltzers on the market mimic American soda, with their high carbonation levels and sweetness,” Nierman said. “I wanted to re-create hard seltzer with yerba mate, which is to seltzer what hops are to beer. It adds depth of flavor and aroma.”

Yerbuzz, which is betting on its unique formulation as a primary point of difference, currently sells its products in the San Diego area.

Meanwhile, on the other side of the country, New York-based Lunar is trying to excite a demographic of drinkers that founders Kevin Wong and Sean Ro believe are being ignored.

In 2018, Wong and Ro were dining at a Korean fired chicken joint in New York City when they recognized a lack of drink options “celebrating” the flavors they grew up on.

“The reason why some of these major brands — that come in lemon-lime and raspberry flavors — are not on the menu is because they don’t pair well with these authentic dishes being served,” Wong said.

So, Wong and Ro got work testing hundreds of recipes and experimenting with fruits like yuzu and lychee that are more familiar to Asian Americans.

“What we ended up with is a craft seltzer that uses real ingredients sourced directly from farms in Asia,” Wong said, adding that its flavors are “familiar and nostalgic.”

Part of Lunar’s bet is that it can convince Asian Americans — who Wong and Ro believe aren’t consuming much spiked or nonalcoholic sparkling water — to enter the category through its unique flavors.

“I grew up eating lychee jelly as a kid and going on walks with my grandma to street vendors in Taiwan,” Wong said. “That’s the memory of lychee to me. Fresh, succulent, tropical and very sweet. That’s something we want to share with the world.”

Lunar is currently sold throughout New York, and the company recently began shipping directly to customers in 32 states and Washington D.C.

Both Lunar and Yerbuzz are not alone in their battles against the behemoths.

California-based craft beer maker Calicraft makes a line of 100-calorie “spritzers” that drink more like a sparkling wine than a traditional hard seltzer, according to founder Blaine Landberg.

“What we’re really leaning on for 2021 is the tagline ‘fruit not fake,’ and explaining to people that we are using real ingredients and not just flavorings,” said Landberg, who added that customers are becoming increasingly interested in finding more premium hard seltzer options.

Other products, like Decoy Wines’ seltzer line — which comes in 8.4 oz. cans and retails for $15 per four-pack — are actually made from a wine base.

“We saw an opportunity to leverage our decades of luxury winemaking experience and provide wine lovers with something genuinely unique and appealing in this popular category,” Decoy winemaker Dana Epperson explained.

And then there’s the forthcoming Game Up hard seltzer, which looks more like a hydration beverage for athletes than a hard seltzer.

“Game Up has real flavor from real fruit that’s missing in pretty much everything else that’s out there,” said co-founder Brian Flatow, a marketer who noted that Game Up was intentionally designed to appeal to “active-lifestyle drinkers.”

The brand’s first two flavors — lemon-lime and orange — check-in at 4.9% and 100 calories, and contain electrolytes from sodium, magnesium and potassium. It will initially be sold in 12-packs across New York, Connecticut, New Jersey and Massachusetts.

“We’ve been building brands for decades and we saw a real opportunity to position a true challenger in the hard seltzer space,” Flatow said. “To us, everything looked the same, the shelves were cluttered and, although there are clear leaders, we only saw parity products and brands that lacked meaning.”

Whether these new brands succeed is ultimately up to consumers who will vote with their wallets, as well as distributors and retailers who are inundated with options and need to focus on selling higher velocity SKUs.

However, Landberg believes that over time, smaller brands with unique points of difference could chip away at that market share and mimic the success craft beer companies experienced over the last two decades.

“Anyone coming into the category without the intention of creating a product they believe in will fall short,” he said. “But I do believe you will see a segmentation of the market, and successful brands that capture the attention of the next wave customer.”

A Jewish-Australian AccentReading your letter really resonated with me. Not because I am Asian-Australian myself, but because I undeniably have what I … END_OF_DOCUMENT_TOKEN_TO_BE_REPLACED

He's a legend in New Jersey high school wrestling – and a mystery in the stock market.Paul Morina, the principal of Paulsboro, New Jersey, High … END_OF_DOCUMENT_TOKEN_TO_BE_REPLACED