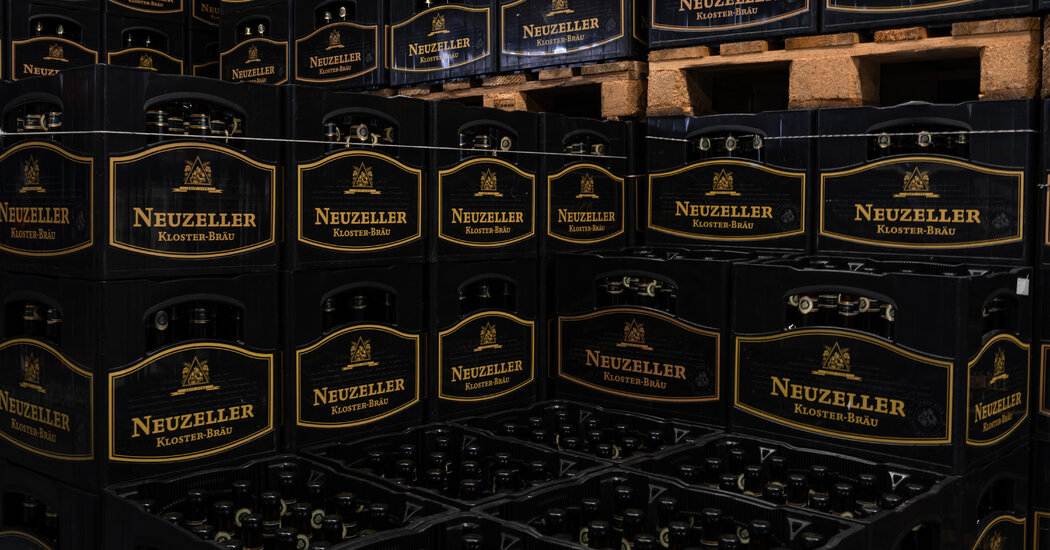 Stefan Fritsche, who runs a centuries-old German brewery in Neuzelle, near the Polish border, has seen his natural gas bill jump a startling 400 percent over the past year. His electricity bill has increased 300 percent. And he’s paying more for barley than ever before.

But the soaring inflation for energy and grains in the wake of the Ukraine war is no match for the biggest challenge facing Mr. Fritsche’s brewery, Klosterbrauerei Neuzelle, and others like it across Germany: a severe shortage of beer bottles.

The problem is “unprecedented,” Mr. Fritsche said. “The price of bottles has exploded.”

The issue is not so much a lack of bottles. Germany’s roughly 1,500 breweries have up to four billion returnable glass bottles in circulation — about 48 for every man, woman and child.

recycling, it comes with one major problem: getting people to return their empties.

Dragging a crate — or several — of empty glass bottles back to a store can be a hassle, even if it means getting back the deposit fee. So people tend to let them stack up, in the basements of their homes or on the balconies of their apartments, biding their time until they are running out of either space or spare cash.

“It is deadly for small brewers,” Mr. Fritsche said. The brewery he runs sells 80 percent of its beer in bottles. (In 2003, a recycling law was expanded to focus on reducing waste in the beverage industry, meaning most beer sold for the domestic market is in returnable bottles, not cans.)

annual survey by Kirin, the Japanese brewer. (The United States ranked 17th.) But on the whole, Germans are cutting back. Since the Federal Statistics Office began keeping records in 1993 — a year after Mr. Fritsche’s family took over the brewery in Neuzelle — national consumption of beer has dropped nearly 24 percent, as people embrace a wider diversity of soft drinks.

Lockdowns surrounding the coronavirus over the past two years also contributed to the trend, as bars remained closed and sporting and cultural events were canceled.

The difficult environment makes management of the breweries all the more important. Mr. Fritsche said he had relied for decades on a combination of tradition and creativity.

A willingness to push the boundaries and think around the corner is essential to surviving in a tougher business environment, he said. For example, the brewery has a bottle of its signature product, Schwarzer Abt, or Black Abbot, that has been blessed by Pope Francis. The bottle is now dipped into each fresh batch of Schwarzer Abt.

What helps, too, is taking a long view of the history that comes with running a business founded in 1589, the events that it has witnessed and withstood over time.

“Nazis, Communists, government takeovers — in the past, we’ve had just about everything here,” Mr. Fritsche said. “And we have survived it all. We will get through this as well.”

AUSTIN, Texas--(BUSINESS WIRE)--As the first multifamily management company to be recognized in the Public Relations and Marketing Excellence Awards, … END_OF_DOCUMENT_TOKEN_TO_BE_REPLACED

There have been whispers of cooling housing and rental prices in the San Francisco Bay Area, but that hasn't yet translated into practical, noticeable … END_OF_DOCUMENT_TOKEN_TO_BE_REPLACED

Cars pass in Independence Square at twilight in Kyiv, Ukraine, Monday, Oct. 31, 2022. Rolling ... [+] blackouts are increasing across Ukraine as the … END_OF_DOCUMENT_TOKEN_TO_BE_REPLACED