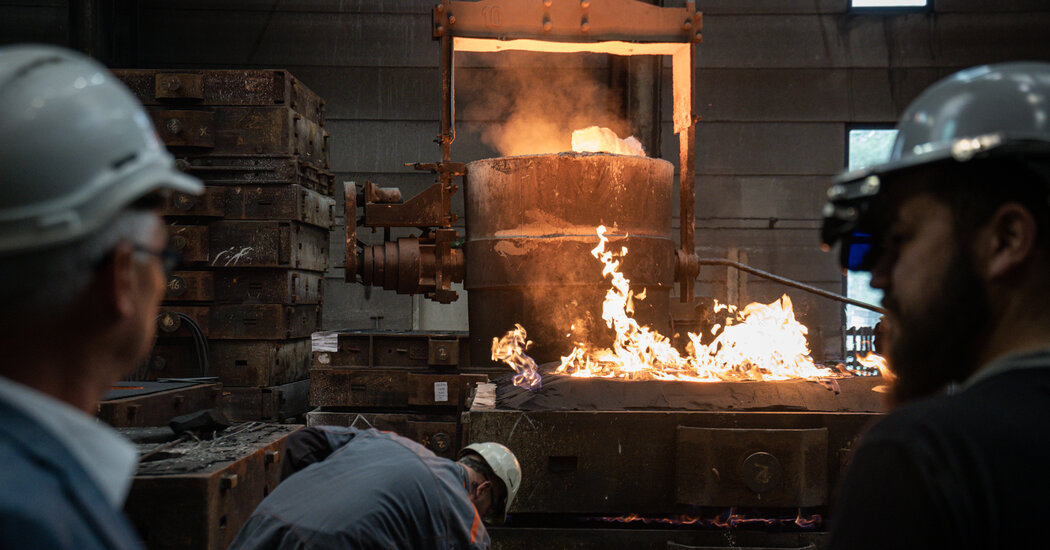 Russian natural gas has fired the furnaces that create molten stainless steel at Clemens Schmees’s family foundry since 1961, when his father set up shop in a garage in the western part of Germany.

It never crossed Clemens’s mind that this energy flow could one day become unaffordable or cease altogether. Now Mr. Schmees, like thousands of other chieftains at companies across Germany, is scrambling to prepare for the possibility that his operations could face stringent rationing this winter if Russia turns off the gas.

“We’ve had many crises,” he said, sitting in the company’s branch office in the eastern city of Pirna, overlooking the Elbe River valley. “But we have never before had such instability and uncertainty, all at once.”

Nord Stream 1, the direct gas pipeline between Russia and Europe, was shut down for 10 days of scheduled maintenance.

“gas crisis” and triggered an emergency energy plan. Already landlords, schools and municipalities have begun to lower thermostats, ration hot water, close swimming pools, turn off air-conditioners, dim streetlights and exhort the benefits of cold showers. Analysts predict that a recession in Germany is “imminent.” Government officials are racing to bail out the largest importer of Russian gas, a company called Uniper. And political leaders warn that Germany’s “social peace” could unravel.

The crisis has not only set off a frantic clamber to manage a potentially painful crunch this winter. It has also prompted a reassessment of the economic model that turned Germany into a global powerhouse and produced enormous wealth for decades.

Jacob Kirkegaard, a senior fellow at the German Marshall Fund in Brussels.

A far-reaching conflict. Russia’s invasion on Ukraine has had a ripple effect across the globe, adding to the stock market’s woes. The conflict has caused​​ dizzying spikes in gas prices and product shortages, and has pushed Europe to reconsider its reliance on Russian energy sources.

More than any other economy in the region, Germany’s is built on industrial giants — mighty chemical, auto, glass and steel producers — that consume enormous amounts of fuel, two-thirds of it imported. The chemical and pharmaceutical industries alone use 27 percent of the country’s gas supply.

Most of it came from Russia. Before Mr. Putin invaded Ukraine five months ago and set off retaliatory sanctions from Europe, the United States and their allies, Russia delivered 40 percent of Germany’s imported oil and more than 55 percent of its imported gas.

Gazprom, Russia’s gas monopoly, cut deliveries in June, and if they are reduced further, German industries may soon confront fuel shortages that will compel them to scale back production, Mr. Kirkegaard said. “I don’t think there are that many other European countries that have to do that,” he said.

Over the next five to eight years, until more of an ongoing transition to renewable energy is completed, the country will be “under acute pressure,” he added. “That is the time period when Germany’s economy is still basically going to be fueled by fossil fuels.”

China, Germany’s biggest trading partner, is expected to see substantially slower growth than in the previous decade, reporting on Friday that the economy expanded just 0.4 percent in the second quarter. That slowdown is likely to ripple through other emerging nations in Asia, dragging down their growth as well.

Some economists have argued that the German business models were partly based on an erroneous assumption and that cheap Russian gas wasn’t as cheap as it looked.

The economist Joseph Stiglitz, a Nobel laureate, said the market failed to accurately price in the risk — however unlikely it may have seemed at the time — that Russia could decide to reduce or withhold gas to apply political pressure.

It would be like figuring the costs of building a ship without including the cost of lifeboats.

“They didn’t take into account what could happen,” Mr. Stiglitz said.

Inflation last month was 7.6 percent. Investor confidence in Germany has dropped to its lowest point in a decade.

Households, hospitals and essential services will be considered priorities if gas rationing becomes unavoidable, but industrial representatives have been pleading their cases in Berlin.

as much as 12 percent once ripple effects on industries beyond energy and consumers were taken into account.

Looking ahead to the winter, Mr. Krebs said much depended on the temperature and Russian gas delivery levels.

“The best case is stagnation with high inflation,” he said. But over the longer term, he argued, Germany could come out more competitive if it manages the energy transition well and provides speedy and significant public investment to create the requisite infrastructure.

Marcel Fratzscher, president of the German Institute for Economic Research, agreed. Germany’s industrial success is based on added value more than cheap energy, he said. Most German exports, he said, are “highly specialized products — that gives them an advantage and makes them competitive.”

Wage negotiations for the industrial sector are scheduled to begin in September. The powerful I.G. Metall union will seek an 8 percent wage increase for its 3.9 million members. And starting Oct. 1, a new minimum wage law will establish for the first time a single national rate — 12 euros an hour.

For now, supply chain breakdowns are still causing headaches, and businesses that were only beginning to recover from the Covid-19 pandemic are busy devising contingency plans for gas shortages.

Beiersdorf, maker of skin care products including Nivea, has had a crisis team in place since May to draw up backup plans — including readying diesel generators — to ensure production keeps running.

At Schmees, high costs have already forced the shutdown of one furnace, cutting into the foundry’s ability to meet deadlines. Customers waiting for deliveries of stainless steel include companies that run massive turbines used in icebreaker ships and artists who use it in their sculptures.

Mr. Schmees, an energetic man who prides himself on having nurtured a strong company culture, is planning to ask his employees to work a six-day week through the end of the year, to ensure that he can fill all of the firm’s orders by December. That is how long he’s betting that Germany’s natural gas supplies will hold if Russia cuts off the flow entirely.

“The tragedy,” Mr. Schmees said, “is that we have only now realized what we’ve gambled away with this cheap gas from Russia.”

You were seeing double this week: A spectacular $54 million compound featuring two equally luxurious mansions separated by a private lake in Southwest … END_OF_DOCUMENT_TOKEN_TO_BE_REPLACED

Taylor Heinicke #4 of the Washington Football Team celebrates after defeating the Seattle Seahawks at FedExField on November 29, 2021 in Landover, … END_OF_DOCUMENT_TOKEN_TO_BE_REPLACED

Members of the Ukrainian Police force, Larisa, 31, and Roman, 30, get married at a wedding hall at an expo center in Kyiv, Ukraine, on … END_OF_DOCUMENT_TOKEN_TO_BE_REPLACED