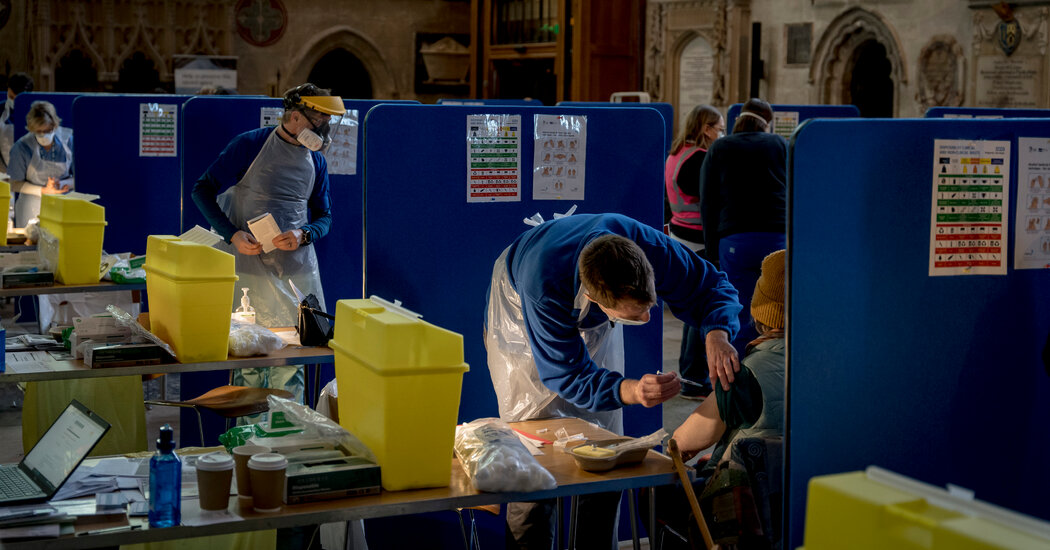 In January, Britain made a change to its vaccine guidelines that shocked many health experts: If the second dose of one vaccine wasn’t available, patients could be given a different one.

The new rule was based on sheer guesswork; there was no scientific data at the time demonstrating that mixing two coronavirus vaccines was safe and effective. But that may change soon.

In February, researchers at the University of Oxford began a trial in which volunteers received a dose of the Pfizer-BioNTech vaccine followed by a dose of AstraZeneca’s formulation, or vice versa. This month, the researchers will start analyzing the blood of the subjects to see how well the mix-and-match approach works.

As growing numbers of vaccines are being authorized, researchers are testing other combinations. A few are in clinical trials, while others are being tested in animals for now.

When the Covid-19 pandemic began last year, the Gamaleya researchers used a similar strategy to create vaccines against the new coronavirus. The first dose used the same adenovirus as in their Ebola vaccine, called Ad5. The second dose contained a different human adenovirus, Ad26. The researches inserted a gene into both viruses for the protein on the surface of the coronavirus, called spike.

Studies revealed that the vaccine, now known as Sputnik V, provided a strong defense against Covid-19. In clinical trials, the researchers found that it had an efficacy of 91.6 percent. Sputnik V is now in use in Russia and 56 other countries.

Recently, the Gamaleya institute joined forces with AstraZeneca, which makes its own Covid-19 vaccine. AstraZeneca’s consists of two doses of a chimpanzee adenovirus called ChAdOx1. Last week, the company reported that its vaccine had an efficacy of 76 percent.

found that the mixture worked better than two doses of the spike or of the R.B.D.

The researchers suspect that the first dose produces a broad range of antibodies that can stick to spots along the length of the spike protein, and that the second dose delivers a big supply of particularly potent antibodies to the tip of the spike. Together, the assortment of antibodies does a better job of stopping the coronavirus.

held back exports of vaccines to other countries as it grappled with a surge of Covid-19. For countries that were counting on those vaccines, a safe alternative for second doses could save lives.

After Britain was criticized in January for suggesting that vaccines could be mixed, researchers at the University of Oxford set out to put the idea to a formal test. In a trial called Com-Cov, they recruited 830 volunteers to test the two vaccines authorized by the British government: AstraZeneca’s adenovirus-based vaccine and the vaccine by Pfizer-BioNTech.

Pfizer-BioNTech’s vaccine uses a fundamentally different technology to produce spike proteins in the body. It contains tiny bubbles with genetic molecules called RNA. Once the bubbles fuse to cells, the cells use the RNA to make spike proteins.

stronger immune responses than mice that received the same vaccine for both doses.

Whether scientists carry out more experiments on other vaccines will depend on the willingness of the vaccine manufacturers. “You’re requiring quite large pharmaceutical companies to play nice together,” Dr. Wheatley said.

Dr. Bernard Moss, a virologist at the National Institute of Allergy and Infectious Diseases, suspects that a number of companies will be willing to let their vaccines be tested in combinations. “It’s always better to be a part of something that is going to be used,” he said, “than to wholly own something that isn’t.”

Chief Covelli said Mr. Crimo planned the shooting for several weeks, but that the authorities had not yet established what his motive was. “We have no … END_OF_DOCUMENT_TOKEN_TO_BE_REPLACED

Kevin McKenzie and Martine van Hamel were standing in the dining room of their weekend house in Woodstock, N.Y., trying to figure out when they got … END_OF_DOCUMENT_TOKEN_TO_BE_REPLACED