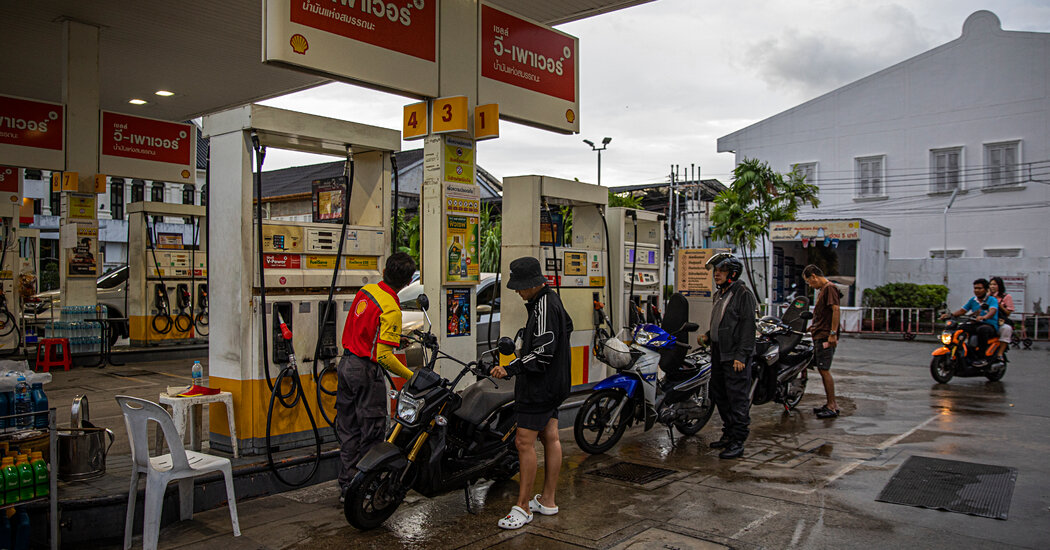 The Federal Reserve has embarked on an aggressive campaign to raise interest rates as it tries to tame the most rapid inflation in decades, an effort the central bank sees as necessary to restore price stability in the United States.

But what the Fed does at home reverberates across the globe, and its actions are raising the risks of a global recession while causing economic and financial pain in many developing countries.

Other central banks in advanced economies, from Australia to the eurozone, are also lifting rates rapidly to fight their inflation. And as the Fed’s higher interest rates attract money to the United States — pumping up the value of the dollar — emerging-market economies are being forced to raise their own borrowing costs to try to stabilize their currencies to the extent possible.

Altogether, it is a worldwide push toward more expensive money unlike anything seen before in the 21st century, one that is likely to have serious ramifications.

warned the damage could be particularly acute in poorer nations. Developing economies had already been dealing with a cost-of-living crisis because of soaring food and fuel prices, and now their American imports are growing steadily more expensive as the dollar marches higher.

The Fed’s moves have spurred market volatility and worries about financial stability, as higher rates elevate the value of the U.S. dollar, making it harder for emerging-market borrowers to pay back their dollar-denominated debt.

It is a recipe for globe-spanning turmoil and even recession. Despite that, the Fed is poised to continue raising interest rates. That’s because the Fed, like central banks around the world, is in charge of domestic economy goals: It’s supposed to keep inflation slow and steady while fostering maximum employment. While occasionally called “central banker to the world” because of the dollar’s foremost position, the Fed goes about its day-to-day business with its eye squarely on America.

The threat facing the global economy — including the Fed’s role in it — is expected to dominate the conversation next week as economists and government officials convene in Washington for the annual meeting of the International Monetary Fund and World Bank.

In a speech at Georgetown University on Thursday, Kristalina Georgieva, the managing director of the I.M.F., offered a grim assessment of the world economy and the tightrope that central banks are walking.

“Not tightening enough would cause inflation to become de-anchored and entrenched — which would require future interest rates to be much higher and more sustained, causing massive harm on growth and massive harm on people,” Ms. Georgieva said. “On the other hand, tightening monetary policy too much and too fast — and doing so in a synchronized manner across countries — could push many economies into prolonged recession.”

Noting that inflation remains stubbornly high and broad-based, she added: “Central banks have to continue to respond.”

The World Bank warned last month that simultaneous interest-rate increases around the world could trigger a global recession next year, causing financial crises in developing economies. It urged central banks in advanced economies to be mindful of the cross-border “spillover effects.”

So far, major central banks have shown little appetite for stopping their inflation-busting campaigns. The Fed, which has made five rate increases this year, has signaled that it plans to raise borrowing costs even higher. Most officials expect to increase rates by at least another 1.25 percentage points this year, taking the policy rate to a range of 4.25 to 4.5 percent from the current 3 to 3.25 percent.

Even economies that are facing a pronounced slowdown have been lifting borrowing costs. The European Central Bank raised rates three-quarters of a point last month, even though the continent is approaching a dark winter of slowing growth and crushing energy costs.

according to the World Bank. Food costs in particular have driven millions further into extreme poverty, exacerbating hunger and malnutrition. As the dollar surge makes a range of imports pricier for emerging markets, that situation could worsen, even as the possibility of financial upheaval increases.

In Africa, officials have been urging the I.M.F. and Group of 20 nations to provide more emergency assistance and debt relief amid inflation and rising interest rates.

“This unprecedented shock further destabilizes the weakest economies and makes their need for liquidity even more pressing, to mitigate the effects of widespread inflation and to support the most vulnerable households and social strata, especially young people and women,” Macky Sall, chairman of the African Union, told leaders at the United Nations General Assembly in September.

To be sure, central bankers in big developed economies like the United States are aware that they are barreling over other economies with their policies. And although they are focused on domestic goals, a severe weakening abroad could pave the way for less aggressive policy because of its implications for their own economic outlooks.

Waning demand from abroad could ease pressure on supply chains and reduce prices. If central bankers decide that such a chain reaction is likely to weigh on their own business activity and inflation, it may give them more room to slow their policy changes.

“The global tightening cycle is something that the Fed has to take into account,” said Megan Greene, global chief economist for the Kroll consulting firm. “They’re interested in what is going on in the rest of the world, inasmuch as it affects their ability to achieve their targets.”

But many global economic officials — including those at the Fed — remain focused on very high inflation. Investors expect them to make another large rate increase when they meet on Nov. 1-2.

“We’re very attentive” to international spillovers to both emerging markets and advanced economies, Lisa D. Cook, a Fed governor, said during a question-and-answer session on Thursday. “But our mandate is domestic. So we’re very focused on inflation as it evolves in this country.”

Raghuram Rajan, a former head of India’s central bank and now an economist at the University of Chicago, has in the past pushed the Fed to take foreign conditions into account as it sets policy. He still thinks that measures like bond-buying should be pursued with an eye on global spillovers.

But amid high inflation, he said, central banks are required to pay attention to their own mandates to achieve price stability — even if that makes for a stronger dollar, weaker currencies and more pain abroad.

“The basic problem is that the world of monetary policy dances to the Fed’s tune,” Mr. Rajan said, later adding: “This is a problem with no easy solutions.”

AUSTIN, Texas--(BUSINESS WIRE)--As the first multifamily management company to be recognized in the Public Relations and Marketing Excellence Awards, … END_OF_DOCUMENT_TOKEN_TO_BE_REPLACED

There have been whispers of cooling housing and rental prices in the San Francisco Bay Area, but that hasn't yet translated into practical, noticeable … END_OF_DOCUMENT_TOKEN_TO_BE_REPLACED

Cars pass in Independence Square at twilight in Kyiv, Ukraine, Monday, Oct. 31, 2022. Rolling ... [+] blackouts are increasing across Ukraine as the … END_OF_DOCUMENT_TOKEN_TO_BE_REPLACED