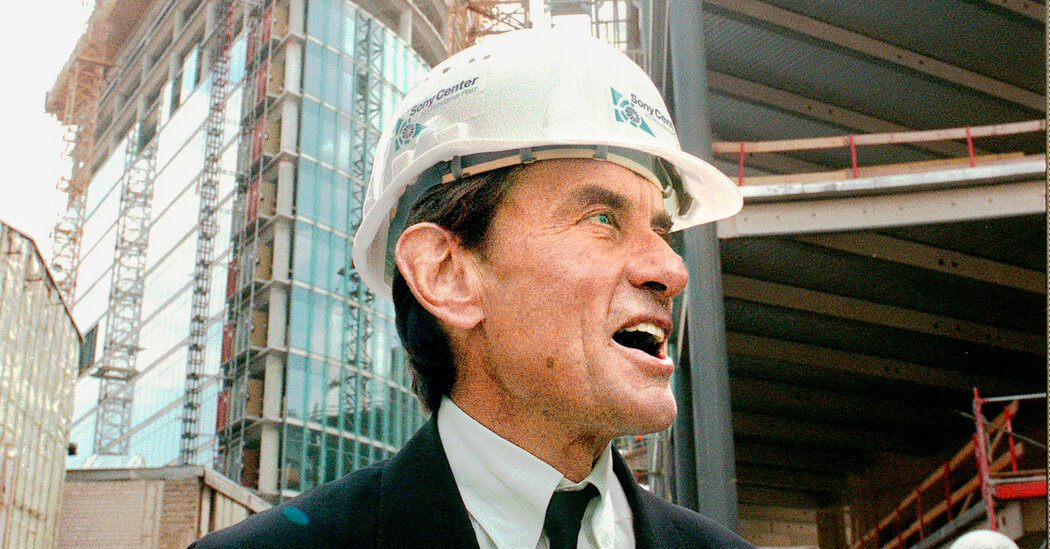 Helmut Jahn, a German-born architect who designed buildings around the world but was most influential in his adopted hometown, Chicago, where he conceived of an extravagant downtown home to state government and the United Airlines terminal at O’Hare International Airport, died on Saturday in a traffic accident near the horse farm where he lived, in St. Charles, Ill. He was 81.

His wife, Deborah (Lampe) Jahn, confirmed the death. He had been riding his bicycle in suburban Campton Hills when he was struck by two cars that were heading in opposite directions. A news release from the local police department said that Mr. Jahn failed to brake at a stop sign.

A modernist who began a long flirtation with postmodernism in the 1970s, Mr. Jahn (pronounced “yahn”) designed the Xerox Center, an elegant 45-story office tower with a glass and aluminum curtain wall, a rounded corner and a two-story streetfront that undulates inward that opened in 1980 in Chicago’s Loop.

Philip Johnson called Mr. Jahn “a genuine genius” and “a comet flashing in the sky,” although he added, “I don’t know about him yet.”

At the time, construction of Mr. Jahn’s futuristic design of the State of Illinois Center — a government and retail complex — was nearly complete in the middle of the Loop. The facade is a mix of reflective bluish-turquoise glass; inside, the circular atrium has a mix of salmon-colored and blue metal panels. Multicolored granite lines the base.

In his 1985 review in The New York Times, the architecture critic Paul Goldberger said that the complex’s “squat form, which swoops around one corner in a 16-story-high curve, is one part Pompidou Center, one part Piranesi and one part kitsch 1950s revival. He added, “It is not surprising that it has left even this relatively sophisticated city breathless.”

Reaction to Mr. Jahn’s buildings in Chicago ranged from “dazzling” to the critical observation that it was “unrelated to anything else in the whole of Western civilization.”

Helmut Jahn was born on Jan. 4, 1940, in Nuremberg, Germany, and grew up in a nearby suburb. His father, Wilhelm, was a special-education teacher. His mother, Lena (Werth) Jahn, was a homemaker.

As a boy, Helmut loved drawing and painting, but he aspired to be an airline pilot. “But he wasn’t very good at languages, which disqualified him to be a pilot for Lufthansa,” his wife said, “so he chose architecture because it involved a lot of drawing.”

After graduating from the Technische Hochschule in Munich, he earned a master’s degree from the Illinois Institute of Technology College of Architecture. After he graduated in 1967, he was hired by Gene Summers, formerly the right-hand man to the modernist giant Ludwig Mies van der Rohe, at the venerable Chicago architectural firm C.F. Murphy Associates.

But five years later the roof collapsed in a rainstorm.

The failure was found to have been caused by the fracture of high strength bolts that helped suspend the roof.

In 1981, Murphy Associates became Murphy/Jahn; Mr. Jahn became the firm’s president a year later and acquired it in 1983. It was renamed Jahn in 2012.

After designing the State of Illinois Center (which would be renamed the James R. Thompson Center, for the Illinois Republican governor who backed it), Mr. Jahn worked with Donald J. Trump to design a 150-floor tower that would have been the centerpiece of a megacomplex on the West Side of Manhattan called Television City.

Mr. Jahn’s other projects in Manhattan included the 70-story CitySpire in Midtown, behind City Center, and 425 Lexington Avenue, which the architecture critic Carter Horsley dismissed in The City Review in 1987 for its “Roto-Rooterized top,” which he said looked like a “squished foil to the irrepressible upward thrust of the Chrysler Building just across 43rd Street.”

Joe and Rika Mansueto Library at the University of Chicago (2011), with an elliptical, 40-foot-high dome that covers a 180-seat reading room and an underground automated storage and retrieval system.

Writing in The Chicago Tribune, the critic Blair Kamin called the library a “convention-busting marvel” that “students seem to love because it lets natural air pour inside, liberating them from the university’s dimly lit reading rooms.”

Mr. Jahn was working on designs until the end of his life.

“He was so possessed with getting his work done,” Mrs. Jahn said by phone. “He was just a one-man show. He had so many ideas in his head.”

In addition to his wife, whom he met when she was the interior designer for McCormick Place, Mr. Jahn is survived by his son, Evan, a partner in the firm; two granddaughters; and a brother, Otmar.

Earlier this month, Gov. J.B. Pritzker’s administration accelerated the process, sending developers a request for proposals to sell the building, whose upkeep has been deemed too costly.

Last year, Mr. Jahn offered a proposal to save the building by adapting it to create new offices, a hotel and apartments, and building an office tower on the southwest corner of West Randolph and North LaSalle Streets. He also proposed removing the building’s front doors and turning the enormous atrium into a covered outdoor space.

“A demolition and replacement would not only take a long time but seeks high density without considering public benefits,” he wrote in his proposal. We need not more bigger buildings, but buildings which improve the public space.”

It’s a property that offers a unique open floor plan—plus a hot tub with a view.“It was a Methodist church located in a historic little area of St. … END_OF_DOCUMENT_TOKEN_TO_BE_REPLACED