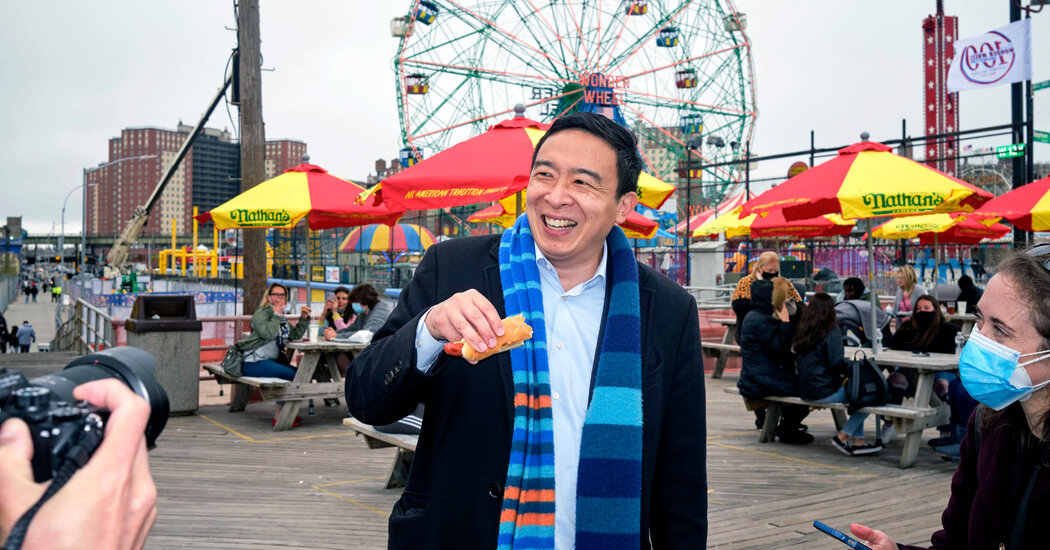 “The media has a bias toward celebrity and novelty and energy,” said U.S. Representative Ritchie Torres of the Bronx, who has endorsed Mr. Yang.

The candidate’s version of Trumpian provocation is a series of Twitter controversies over mildly misguided enthusiasm for bodegas and subways. “The Daily Show” last week launched a parody Twitter account featuring a wide-eyed Mr. Yang excitedly declaring gems like “Real New Yorkers want to get back to Times Square.”

Mr. Yang was less amused than usual by that effort. “It seems like an odd time to utilize Asian tourist tropes,” he told me acidly. “I wish it were funnier.”

The joke is also probably on his critics. He has, like Mr. Trump, appeared simply to benefit from the attention. When his campaign asked the fairly narrow slice of Democratic primary voters who get their news from Twitter how they would characterize what they were seeing about the candidate, 79 percent said it was positive.

While Mr. Yang isn’t new to the city, he’s new to its civic life. He has never even voted in a mayoral election. The provocative heart of his presidential campaign, a promise to palliate dystopian, robot-driven social collapse by handing out $1,000 a month to a displaced citizenry, doesn’t make sense in city budgeting, and so he replaced it with a program of cash supplements targeted, more traditionally, at the poor. It’s unclear how many people still think he’s the free-money candidate.

His campaign’s top staffers work for a consulting firm headed by Bradley Tusk, a former aide to Mayor Bloomberg and the disgraced former Illinois governor Rod Blagojevich. Mr. Tusk, who also advised Uber, has steered Mr. Yang toward a broad-strokes, pro-business centrism and kept him out of the other candidates’ competition for the left wing of the primary electorate.

Mr. Tusk told me in an unguarded moment in March that Mr. Yang’s great advantage was that he came to local politics as an “empty vessel,” free of fixed views on city policy or set alliances. When I asked the candidate what he made of that remark, Mr. Yang took no offense. “A lot of New Yorkers are excited about someone who will come in and just try to figure out, like what the best approach to a particular problem is, like free of a series of obligations to existing special interests,” he said.

LANSING, Mich. — At least 357 sitting Republican legislators in closely contested battleground states have used the power of their office to discredit … END_OF_DOCUMENT_TOKEN_TO_BE_REPLACED

About an hour outside of the capital city of San Juan, the sumptuous spread known as Hacienda Illusion is now on the market for $48 million. For a … END_OF_DOCUMENT_TOKEN_TO_BE_REPLACED

Kids at Hilton Aruba play with the resident birds. Hilton Aruba As summer nears, hotels around the world are making big changes and refreshing their … END_OF_DOCUMENT_TOKEN_TO_BE_REPLACED