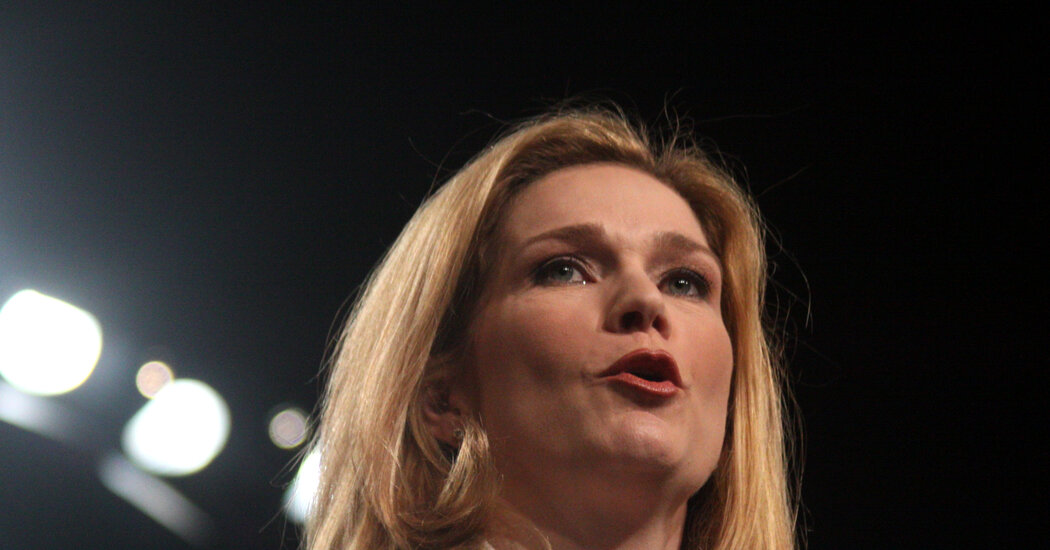 In 2011, Catherine Engelbrecht appeared at a Tea Party Patriots convention in Phoenix to deliver a dire warning.

While volunteering at her local polls in the Houston area two years earlier, she claimed, she witnessed voter fraud so rampant that it made her heart stop. People cast ballots without proof of registration or eligibility, she said. Corrupt election judges marked votes for their preferred candidates on the ballots of unwitting citizens, she added.

Local authorities found no evidence of the election tampering she described, but Ms. Engelbrecht was undeterred. “Once you see something like that, you can’t forget it,” the suburban Texas mom turned election-fraud warrior told the audience of 2,000. “You certainly can’t abide by it.”

planting seeds of doubt over the electoral process, becoming one of the earliest and most enthusiastic spreaders of ballot conspiracy theories.

fueled by Mr. Trump, has seized the moment. She has become a sought-after speaker at Republican organizations, regularly appears on right-wing media and was the star of the recent film “2,000 Mules,” which claimed mass voter fraud in the 2020 election and has been debunked.

She has also been active in the far-right’s battle for November’s midterm elections, rallying election officials, law enforcement and lawmakers to tighten voter restrictions and investigate the 2020 results.

said in an interview last month with a conservative show, GraceTimeTV, which was posted on the video-sharing site Rumble. “There have been no substantive improvements to change anything that happened in 2020 to prevent it from happening in 2022.”

set up stakeouts to prevent illegal stuffing of ballot boxes. Officials overseeing elections are ramping up security at polling places.

She has “taken the power of rhetoric to a new place,” said Sean Morales-Doyle, the acting director of voting rights at the Brennan Center, a nonpartisan think tank. “It’s having a real impact on the way lawmakers and states are governing elections and on the concerns we have on what may happen in the upcoming elections.”

Some of Ms. Engelbrecht’s former allies have cut ties with her. Rick Wilson, a Republican operative and Trump critic, ran public relations for Ms. Engelbrecht in 2014 but quit after a few months. He said she had declined to turn over data to back her voting fraud claims.

“She never had the juice in terms of evidence,” Mr. Wilson said. “But now that doesn’t matter. She’s having her uplift moment.”

a video of the donor meeting obtained by The New York Times. They did not elaborate on why.

announce a partnership to scrutinize voting during the midterms.

“The most important right the American people have is to choose our own public officials,” said Mr. Mack, a former sheriff of Graham County, Ariz. “Anybody trying to steal that right needs to be prosecuted and arrested.”

Steve Bannon, then chief executive of the right-wing media outlet Breitbart News, and Andrew Breitbart, the publication’s founder, spoke at her conferences.

True the Vote’s volunteers scrutinized registration rolls, watched polling stations and wrote highly speculative reports. In 2010, a volunteer in San Diego reported seeing a bus offloading people at a polling station “who did not appear to be from this country.”

Civil rights groups described the activities as voter suppression. In 2010, Ms. Engelbrecht told supporters that Houston Votes, a nonprofit that registered voters in diverse communities of Harris County, Texas, was connected to the “New Black Panthers.” She showed a video of an unrelated New Black Panther member in Philadelphia who called for the extermination of white people. Houston Votes was subsequently investigated by state officials, and law enforcement raided its office.

“It was a lie and racist to the core,” said Fred Lewis, head of Houston Votes, who sued True the Vote for defamation. He said he had dropped the suit after reaching “an understanding” that True the Vote would stop making accusations. Ms. Engelbrecht said she didn’t recall such an agreement.

in April 2021, did not respond to requests for comment. Ms. Engelbrecht has denied his claims.

In mid-2021, “2,000 Mules” was hatched after Ms. Engelbrecht and Mr. Phillips met with Dinesh D’Souza, the conservative provocateur and filmmaker. They told him that they could detect cases of ballot box stuffing based on two terabytes of cellphone geolocation data that they had bought and matched with video surveillance footage of ballot drop boxes.

Salem Media Group, the conservative media conglomerate, and Mr. D’Souza agreed to create and fund a film. The “2,000 Mules” title was meant to evoke the image of cartels that pay people to carry illegal drugs into the United States.

said after seeing the film that it raised “significant questions” about the 2020 election results; 17 state legislators in Michigan also called for an investigation into election results there based on the film’s accusations.

In Arizona, the attorney general’s office asked True the Vote between April and June for data about some of the claims in “2,000 Mules.” The contentions related to Maricopa and Yuma Counties, where Ms. Engelbrecht said people had illegally submitted ballots and had used “stash houses” to store fraudulent ballots.

According to emails obtained through a Freedom of Information Act request, a True the Vote official said Mr. Phillips had turned over a hard drive with the data. The attorney general’s office said early this month that it hadn’t received it.

Last month, Ms. Engelbrecht and Mr. Phillips hosted an invitation-only gathering of about 150 supporters in Queen Creek, Ariz., which was streamed online. For weeks beforehand, they promised to reveal the addresses of ballot “stash houses” and footage of voter fraud.

Ms. Engelbrecht did not divulge the data at the event. Instead, she implored the audience to look to the midterm elections, which she warned were the next great threat to voter integrity.

“The past is prologue,” she said.

Soon after Herschel Walker, the former football star, announced he would run for U.S. Senate in Georgia as a Republican, his son Christian appeared … END_OF_DOCUMENT_TOKEN_TO_BE_REPLACED

SpaceX launched four people to the International Space Station from Florida on Wednesday, as Elon Musk's company keeps up a steady pace of crewed … END_OF_DOCUMENT_TOKEN_TO_BE_REPLACED