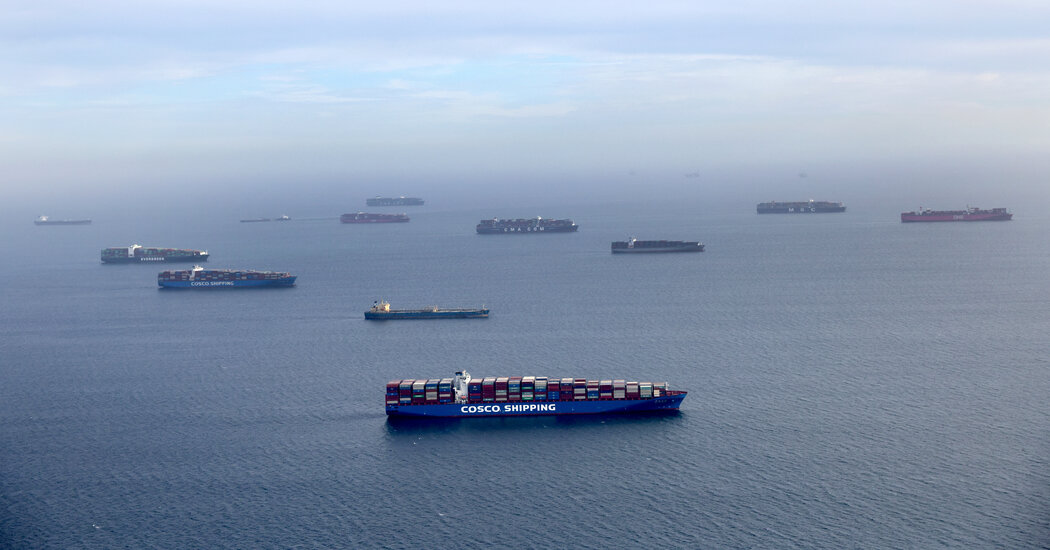 Container ships stretch far out into the Pacific, waiting days for their turn to unload goods at California ports. Automakers pause production because they can’t get enough of the computer chips that make a modern car work. Long-dormant restaurants finally see a surge of customer demand, but they can’t find enough cooks.

These are all headlines of recent days, and they have one thing in common: They show how America’s great economic challenge has turned 180 degrees in a breathtakingly short time.

Just a few months ago, the nation faced an enormous shortage of demand for goods and services, which threatened to prolong the pandemic-induced downturn long beyond the point at which the virus was contained. The central economic problem of 2021 is looking like the polar opposite. Businesses are beginning to face the challenge of producing adequate supplies of goods and services — whether of lumber or of cold beer — to satiate that resurgent demand.

Huge swaths of the economy shut down last spring and are now being turned back on. But as roughly three million Americans are vaccinated per day and nearly $3 trillion in federal money courses through the economy, it is an open question how long it will take businesses to get up to speed. Their collective success or failure will determine whether this is a year of Goldilocks economic conditions, or a frustrating mix of price spikes and persistent shortages.

idled the factory that makes its popular F-150 trucks, for example. Over all, analysts at IHS Markit forecast one million fewer vehicles will be made in the first quarter of 2021 because of the disruptions. That means American consumers who want to put their new stimulus checks toward a car may face fewer options and have little negotiating leverage on price.

The labor market, meanwhile, presents a paradox. The unemployment rate, at 6 percent, is far above its prepandemic level, and the job market is even worse if you include Americans who say they are no longer looking for work. Yet many employers, especially in restaurants and related service industries, describe a shortage of labor.

research on earlier rounds of expanded benefits, which found that a shortage of job opportunities was a bigger factor in joblessness than people staying on unemployment benefits.

The combination of a surge in demand and disruptions in the economy’s supply has important global dimensions, too. Many businesses rely on imports, including from countries that are far behind the United States in vaccinating their people, and in some cases facing new outbreaks.

Moreover, the backup in container ships at the Port of Los Angeles and some other American ports, especially on the West Coast, shows the world trade system has continued to be stressed by the whipsaw effect of last year’s shutdowns followed by surging demand.

“There are companies that have changed the way they operate from before the pandemic and are more digitally enabled, and reopening is not as big a deal for them,” said James Manyika, a partner at McKinsey Global Institute, the in-house research arm of the giant consultancy. “The problem is those are not the majority of companies, and those other companies will find they are highly dependent on their ecosystems and their supply chains.”

You can’t turn the world economy off, then turn it back on, and expect everything to come back to normal instantly, in other words. The question for 2021 is just how slow that rebooting process turns out to be.

AUSTIN, Texas--(BUSINESS WIRE)--As the first multifamily management company to be recognized in the Public Relations and Marketing Excellence Awards, … END_OF_DOCUMENT_TOKEN_TO_BE_REPLACED

There have been whispers of cooling housing and rental prices in the San Francisco Bay Area, but that hasn't yet translated into practical, noticeable … END_OF_DOCUMENT_TOKEN_TO_BE_REPLACED

Cars pass in Independence Square at twilight in Kyiv, Ukraine, Monday, Oct. 31, 2022. Rolling ... [+] blackouts are increasing across Ukraine as the … END_OF_DOCUMENT_TOKEN_TO_BE_REPLACED