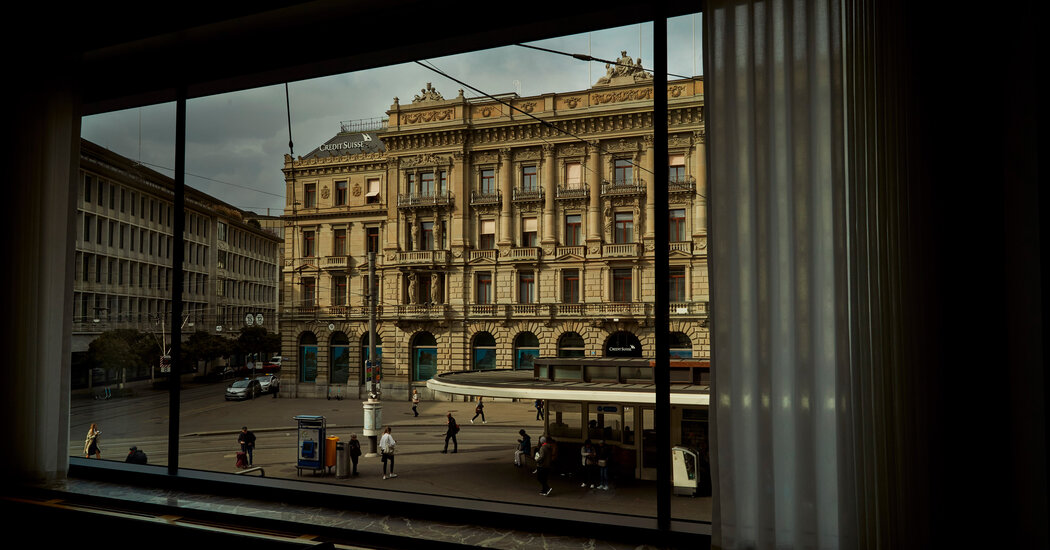 It was Saturday, Oct. 1, and Jim Lewis, who frequently posts on Twitter under the moniker Wall Street Silver, made that assertion to his more than 300,000 followers. “Markets are saying it’s insolvent and probably bust. 2008 moment soon?”

Mr. Lewis was among hundreds of people — many of them amateur investors — who had been speculating about the fate of Credit Suisse, the Swiss bank. It was in the middle of a restructuring and had become an easy target after decades of scandals, failed attempts at reform and management upheavals.

There seemed to be no immediate provocation for Mr. Lewis’s weekend tweet other than a memo that Ulrich Körner, the chief executive of Credit Suisse, had sent employees the day before, reassuring them that the bank was in good financial health.

But the tweet, which has been liked more than 11,000 times and retweeted more than 3,000 times, was one of many that helped ignite a firestorm on social media forums like Twitter and Reddit. The rumor that Credit Suisse was in trouble ricocheted around the world, stumping bank executives and forcing them to call shareholders, trading partners and analysts to reassure them that everything was fine before markets reopened on Monday.

prop up the shares of GameStop, the video game retailer, determined to outsmart hedge funds that had bet the company’s shares would fall.

Our Coverage of the Investment World

The decline of the stock and bond markets this year has been painful, and it remains difficult to predict what is in store for the future.

But what started as a spontaneous effort to take down Wall Street has since become an established presence in the market. Millions of amateur investors have embraced trading, including more sophisticated strategies such as shorting. As the Credit Suisse incident shows, their actions highlight a new source of peril for troubled companies.

Founded in Switzerland in 1856 to help finance the expansion of railroads in the tiny European nation, Credit Suisse has two main units — a private wealth management business and an investment bank. However, the bank has often struggled to maintain a pristine reputation.

It has been the repository of funds from businesspeople who are under sanctions, human rights abusers and intelligence officials. The U.S. government has fined it billions of dollars for its role in helping Americans file false tax returns, marketing mortgage-backed securities tied to the 2008 financial crisis and helping customers in Iran, Sudan and elsewhere breach U.S. sanctions.

In the United States, Credit Suisse built its investment banking business through acquisitions, starting with the 1990 purchase of First Boston. But without a core focus, the bank — whose top bosses sit in Switzerland — has often allowed mavericks to pursue new revenue streams and take outsize risks without adequate supervision.

collapsed. Credit Suisse was one of many Wall Street banks that traded with Archegos, the private investment firm of Bill Hwang, a former star money manager. Yet it lost $5.5 billion, far more than its rivals. The bank later admitted that a “fundamental failure of management and controls” had led to the debacle.

surveillance of Credit Suisse executives under his watch. He left the bank in a stable and profitable condition and invested appropriately across its various divisions, his spokesman, Andy Smith, said.

Credit Suisse replaced Mr. Thiam with Thomas Gottstein, a longtime bank executive. When Archegos collapsed, the bank kept Mr. Gottstein on the job, but he started working with a new chairman, António Horta-Osório, who had been appointed a few months earlier to restructure the bank.

resigned after an inquiry into whether he had broken quarantine rules during the pandemic. But he made swift changes in his short tenure. To reduce risk taking, Mr. Horta-Osório said, the bank would close most of its prime brokerage businesses, which involve lending to big trading firms like Archegos. Credit Suisse also lost a big source of revenue as the market for special purpose acquisition companies, or SPACs, cooled.

By July, Credit Suisse had announced its third consecutive quarterly loss. Mr. Gottstein was replaced by Mr. Körner, a veteran of the rival Swiss bank UBS.

Mr. Körner and the chairman, Axel Lehmann, who replaced Mr. Horta-Osório, are expected to unveil a new restructuring plan on Oct. 27 in an effort to convince investors of the bank’s long-term viability and profitability. The stock of Credit Suisse has dipped so much in the past year that its market value — which stood around $12 billion — is comparable to that of a regional U.S. bank, smaller than Fifth Third or Citizens Financial Group.

Mr. Macleod said he had decided that Credit Suisse was in bad shape after looking at what he deemed the best measure of a bank’s value — the price of its stock relative to its “book value,” or assets minus liabilities. Most Wall Street analysts factor in a broader set of measures.

But “bearing in mind that most followers on Twitter and Reddit are not financial professionals,” he said, “it would have been a wake-up call for them.”

The timing puzzled the bank’s analysts, major investors and risk managers. Credit Suisse had longstanding problems, but no sudden crisis or looming bankruptcy.

Some investors said the Sept. 30 memo sent by Mr. Körner, the bank’s chief executive, reassuring staff that Credit Suisse stood on a “strong capital base and liquidity position” despite recent market gyrations had the opposite effect on stock watchers.

Credit Suisse took the matter seriously. Over the weekend of Oct. 1, bank executives called clients to reassure them that the bank had more than the amount of capital required by regulators. The bigger worry was that talk of a liquidity crisis would become a self-fulfilling prophecy, prompting lenders to pull credit lines and depositors to pull cash, which could drain money from the bank quickly — an extreme and even unlikely scenario given the bank’s strong financial position.

“Banks rely on sentiment,” Mr. Scholtz, the Morningstar analyst, said. “If all depositors want their money back tomorrow, the money isn’t there. It’s the reality of banking. These things can snowball.”

What had snowballed was the volume of trading in Credit Suisse’s stock by small investors, which had roughly doubled from Friday to Monday, according to a gauge of retail activity from Nasdaq Data Link.

Amateur traders who gather on social media can’t trade sophisticated products like credit-default swaps — products that protect against companies’ reneging on their debts. But their speculation drove the price of these swaps past levels reached during the 2008 financial crisis.

Some asset managers said they had discussed the fate of the bank at internal meetings after the meme stock mania that was unleashed in early October. While they saw no immediate risk to Credit Suisse’s solvency, some decided to cut trading with the bank anyway until risks subsided.

In another private message on Twitter, Mr. Lewis declined to speak further about why he had predicted that Credit Suisse would collapse.

“The math and evidence is fairly obvious at this point,” he wrote. “If you disagree, the burden is really on you to support that position.”

AUSTIN, Texas--(BUSINESS WIRE)--As the first multifamily management company to be recognized in the Public Relations and Marketing Excellence Awards, … END_OF_DOCUMENT_TOKEN_TO_BE_REPLACED

There have been whispers of cooling housing and rental prices in the San Francisco Bay Area, but that hasn't yet translated into practical, noticeable … END_OF_DOCUMENT_TOKEN_TO_BE_REPLACED

Cars pass in Independence Square at twilight in Kyiv, Ukraine, Monday, Oct. 31, 2022. Rolling ... [+] blackouts are increasing across Ukraine as the … END_OF_DOCUMENT_TOKEN_TO_BE_REPLACED