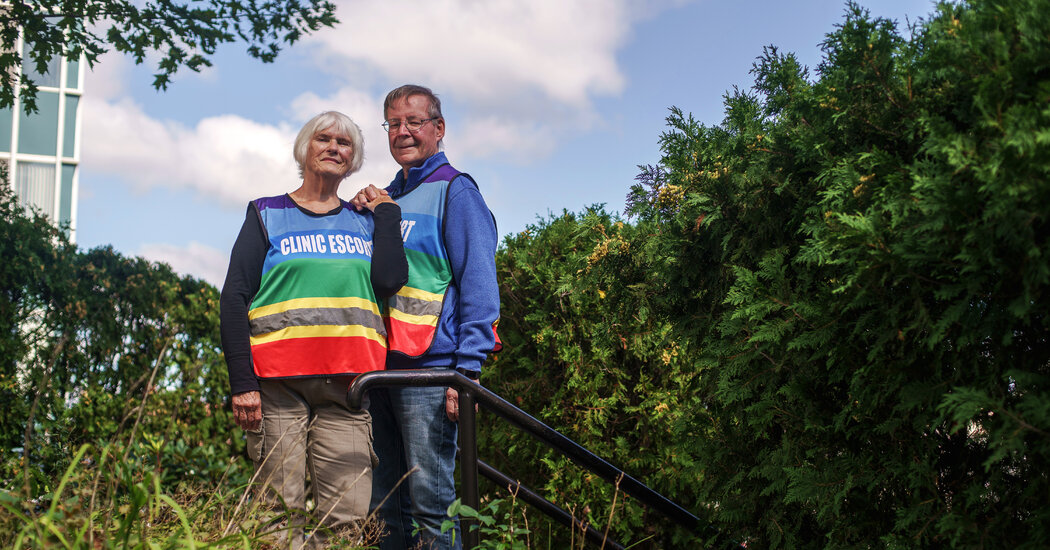 When Barbara Schwartz looks back at her younger days working as a Broadway stagehand, she remembers the electricity of it: the harried dancers slipping into their costumes backstage, the props people shoving past with flashlights between their teeth.

She was able to throw herself into that high-pressure career, she said, because of a choice she made in 1976. She got an abortion at a clinic she found in the Yellow Pages. It was three years after the Roe v. Wade ruling established the constitutional right to an abortion; to Ms. Schwartz, the world seemed full of new professional opportunities for women. She got a credit card in her own name, became one of the first women to make it into the local stagehand union and joined the throngs backstage at shows including “Cats” and “Miss Saigon.”

Ms. Schwartz, 69, is now retired. She is spending her retirement years escorting women to the doors of an abortion clinic on the border of Virginia and Tennessee. She was drawn to this volunteer work, she said, because to her, the promise from her 20s has dimmed — the result of laws that have chipped away at abortion access, with a leaked draft Supreme Court ruling this past week revealing that Roe is likely to be overturned.

“This is my giant pay it forward,” Ms. Schwartz said.

That is how Ginny Jelatis, 67, thinks about it too. She was of high school senior age the year Roe v. Wade was decided; she began serving as a clinic escort after retiring from her work as a history professor in 2016.

43 percent in 1970 to 57.4 percent in 2019. Many different factors drove women into the work force in greater numbers in those years, but scholars argue that abortion access was an important one.

Justice Harry A. Blackmun, a modest Midwestern Republican and a defender of the right to abortion, wrote the majority opinion.

What was the case about? The ruling struck down laws in many states that had barred abortion, declaring that they could not ban the procedure before the point at which a fetus can survive outside the womb. That point, known as fetal viability, was around 28 weeks when Roe was decided. Today, most experts estimate it to be about 23 or 24 weeks.

What else did the case do? Roe v. Wade created a framework to govern abortion regulation based on the trimesters of pregnancy. In the first trimester, it allowed almost no regulations. In the second, it allowed regulations to protect women’s health. In the third, it allowed states to ban abortions so long as exceptions were made to protect the life and health of the mother. In 1992, the court tossed that framework, while affirming Roe’s essential holding.

Recent research has tried to understand the role abortion access plays in women’s employment. Most notable is the Turnaway Study, conducted at the University of California, San Francisco. Researchers followed two groups of women — a group that wanted and got abortions, and another that wanted abortions and were unable to obtain them — for five years and found that those unable to get abortions had worse economic outcomes. Almost two-thirds of those who did not have an abortion they had sought out were living in poverty six months later, compared with 45 percent of those who got the procedure.

patchwork of state laws on abortion access, with 13 states set to ban abortion immediately or very quickly after the court’s ruling. There is likely a correlation between the regions of the country where it is most difficult to get an abortion, and those with the fewest child care and parental leave options, according to an analysis of research findings from the financial site WalletHub.

For older women who felt they were able to attain financial stability because of the decision to have an abortion, there is resonance in sharing their stories with the younger women they meet at clinics today.

“The older folks I work with can remember that dread of, ‘My God, what if it happens to me?’” said Ms. Deiermann, who spent most of her career working in reproductive health advocacy.

Many clinic volunteers, like Ms. Deiermann, remember when their classmates and friends got illegal abortions. Telling those stories feels more urgent than ever.

Karen Kelley, 67, a retired labor and delivery nurse in Idaho, who volunteers at an abortion clinic there, spent her childhood aligned with her Roman Catholic family’s anti-abortion views. Then she found herself pregnant in her early 20s, without an income to support a baby. Realizing that motherhood could “derail all her hopes,” she chose to terminate that pregnancy, about six years after Roe.

That’s a memory Ms. Kelley conveys to the women she escorts to the clinic’s steps. “If I’m asked, I’m always honest that I understand how they’re feeling because I had an abortion and they have every right to make the decision,” she said.

And some older women said that the position they’re in now — retired, with savings and stability — is something they trace back to Roe.

“It gave us a chance to decide to marry and have a family later,” said Eileen Ehlers, 74, a retired high school English teacher and a mother.

What Roe gave her, she said, is something she can now pour back into volunteering: “We have time.”

Listed on April 21 for $2,395,000 with Adam Weissman of Coldwell Banker Bain of Lake Union, the gorgeous four-bedroom brick home was sold on May 6 for … END_OF_DOCUMENT_TOKEN_TO_BE_REPLACED