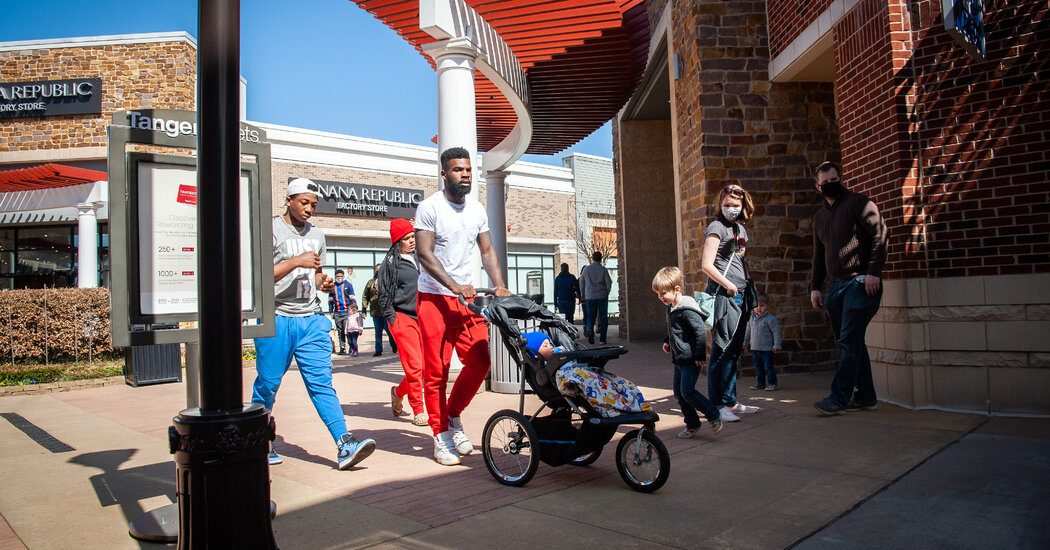 While the Biden administration’s ambitious effort to salve the pandemic’s deep economic wounds made its way through Congress, proponents insisted that funneling $1.9 trillion to American households and businesses wouldn’t unshackle a long-vanquished monster: inflation.

Officials at the Federal Reserve, responsible for balancing the job needs of Americans with price pressures that could erode their buying power, have said there is little cause for worry.

Yet as the legislation moved toward the finish line, inflation prospects increasingly influenced political commentary and Wall Street trading.

The worries reflect expectations of a rapid economic expansion as businesses reopen and the pandemic recedes. Millions are still unemployed, and layoffs remain high. But for workers with secure jobs, higher spending seems almost certain in the months ahead as vaccinations prompt Americans to get out and about, deploying savings built up over the last year.

said in an interview with Bloomberg Television last week.

In addition to the $1.9 trillion about to pour forth, Mr. Dimon said, $1 trillion in savings that piled up during the pandemic remain unspent.

The inflation fixation has been one driver behind a sharp sell-off in government bonds since the start of the year, pairing with a stronger growth outlook to push yields on 10-year notes up to about 1.5 percent, from below 1 percent. Bonds, like stocks, tend to lose value when inflation expectations grow, eroding asset values.

“I would suspect there’s a pretty good chance you’re going to see rates going up,” Mr. Dimon said. “And people are starting to worry about that.”

Mr. Powell said this month, making it clear that he expected the coming increase to be transitory.

The Fed earned an inflation-fighting reputation in the 1970s and 1980s, when it eventually contained runaway prices with double-digit interest rates that caused a recession. But price gains have been slow for decades, and Mr. Powell and his colleagues have been working to ensure that consumers and businesses don’t start to expect ever-lower inflation.

Healthy economies tend to have gentle price increases, which give businesses room to raise wages and leave the central bank with more room to cut interest rates during times of trouble. If inflation drops too low, it risks price declines that are especially painful for debtors, whose debts stay the same even as prices and wages fall.

Fed officials revised their framework for setting monetary policy last summer, saying that instead of shooting exactly for 2 percent inflation, they would aim for 2 percent on average — welcoming inflation that runs faster some of the time.

Inflation is expected to increase in the coming months as prices are measured against weak readings from last year. Analysts surveyed by Bloomberg expect the Consumer Price Index to hit an annual rate of 2.9 percent from April through June, easing to 2.5 percent in the three months after that before easing gradually to year-over-year gains of 2.2 percent in 2022, based on the median projection.

Gasoline prices alone were up 6.4 percent in February. But over all, the data matched projections, suggesting that inflation remains under control, despite a recent rise in prices for commodities like oil and copper. Stock markets rose on the news, with the Dow Jones industrial average reaching a new high.

The inflation concerns among some investors are a turnaround from the aftermath of the 2007-9 recession, which was followed by a decade of frustratingly slow growth in the United States and Europe. For much of that time, deflation, or falling prices, was a leading cause of anxiety among investors and economic experts.

Now there is a belief that economic growth will ramp up at least temporarily, thanks to relief from Capitol Hill and increased vaccinations across the country.

The about-face was noted Wednesday by the economist Bernard Baumohl in a letter to clients. “If you suddenly feel the ground shaking beneath you, it’s not because an earthquake struck,” he wrote. “What you’re experiencing is a wild stampede of Wall Street bulls trampling over their previous softer economic forecasts and now charging ahead with near frothy upward revisions to G.D.P. growth and inflation projections for 2021.”

he said this month. “When they arrive, we will consider raising interest rates. We’re not intending to raise interest rates until we see those conditions fulfilled.”

Fed officials have been less concrete about what might prod them into slowing their vast bond purchases, which they have been using to make many types of borrowing cheaper and bolster demand. Officials have said they would like to see “substantial” progress before tapering off their buying, and have repeatedly said they will signal any change far in advance.

The Fed will meet in Washington next week and release a fresh set of policymakers’ economic projections next Wednesday. Although the Fed looks at the Consumer Price Index, it bases its policy on a different gauge of price trends, which tends to run slightly lower.

“It is possible that participants will project higher 2021 inflation, especially if the Fed staff forecast incorporates policy effects on inflation or a reopening demand surge in select categories,” Goldman Sachs economists wrote last week. “Signaling awareness of these transient boosts to inflation in advance might make it easier for Fed officials to credibly downplay them later.”

The Goldman analysts expect the Fed’s projections to suggest that it might make one rate increase in 2023. Previously, Fed officials had not penciled in any rate increases through the end of that year.

Over the long term, inflation can be a concern because it hurts the value of many financial assets, especially stocks and bonds. It makes everything from milk and bread to gasoline more expensive for consumers, leaving them unable to keep up if salaries stall. And once inflation becomes entrenched, it can be hard to subdue.

But most mainstream economists doubt that a sustained bout of troublesome inflation is on its way.

“The inflation narrative has switched to concerns about rising prices,” said Rubeela Farooqi, chief U.S. economist at High Frequency Economics. “For the Fed, price response to the economy reopening is seen as transitory and is unlikely to cause too much angst, given inflation pressures are not expected to be sustained.”

And Mr. Dimon, the JPMorgan Chase chief, signaled that inflation fears needed to be put in perspective. “I would put that on the things to worry about,” he said, but “I wouldn’t worry too much about it” — certainly not compared with taming the pandemic itself.

GREENVILLE, N.C.--(BUSINESS WIRE)--Employers aiming to win the war on talent have a new “A” team to tap into: college and professional athletes. … END_OF_DOCUMENT_TOKEN_TO_BE_REPLACED

Mortgage rates are likely to rise in July, extending a seven-month streak. High inflation, and the Federal Reserve's efforts to control it, have … END_OF_DOCUMENT_TOKEN_TO_BE_REPLACED