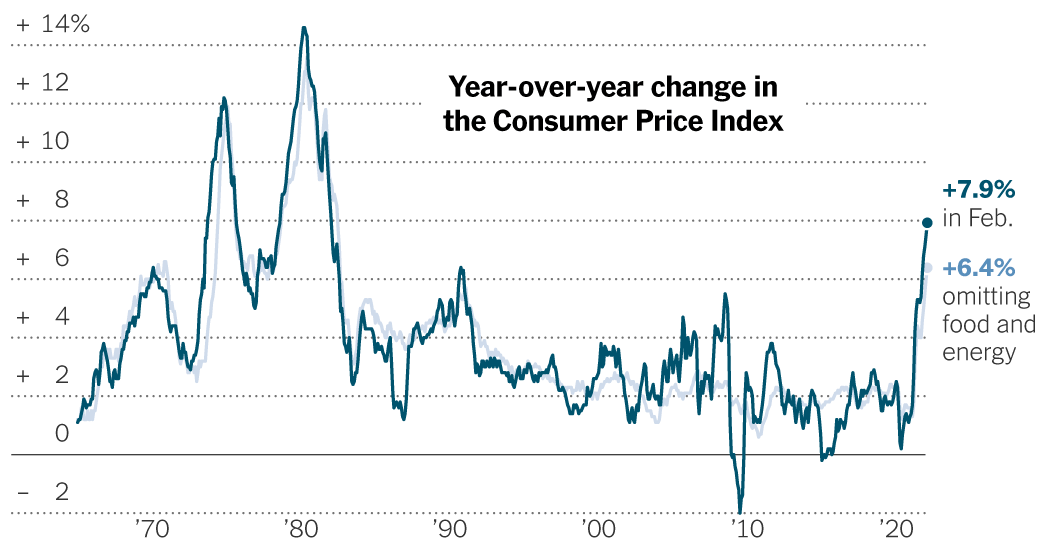 Prices climbed at the fastest pace in decades in the month leading up to the war in Ukraine, underlining the high stakes facing the United States — along with many developed economies — as the conflict promises to drive costs higher.

The Consumer Price Index rose by 7.9 percent through February, the fastest pace of annual inflation in 40 years. Rising food and rent costs contributed to the big increase, the Bureau of Labor Statistics said, as did a nascent surge in gas prices that will become more pronounced in the March inflation report.

The February report caught only the start of the surge in gas prices that came in response to Russia’s invasion of Ukraine late last month. Economists expect inflation to pick up even more in March because prices at the pump have since jumped to record-breaking highs. The average price for a gallon of gas was $4.32 on Thursday, according to AAA.

Rapidly climbing costs are hitting consumers in the pocketbook, causing confidence to fall and stretching household budgets. Rising wages and savings amassed during the pandemic have helped many families continue spending despite rising prices, but the burden is falling most intensely on lower-income households, which devote a big chunk of their budgets to daily necessities that are now swiftly becoming more expensive.

signaled it will raise interest rates by a quarter percentage point at its meeting next week, probably the first in a series of moves meant to increase the cost of borrowing and spending money and slow down the economy. By reducing consumption and slowing the labor market, the Fed is able to take some pressure off inflation over time.

Understand Inflation in the U.S.

Broadening price pressures and high gas costs could become a serious issue for central bank policymakers if they help convince consumers that the run-up in prices will last. If people begin expecting inflation, they may change their behavior in ways that make it more permanent: accepting price increases more readily, and asking for bigger raises to keep up.

“It was another bad report,” said Laura Rosner-Warburton, senior economist at MacroPolicy Perspectives. “Inflation was already way too high before the invasion of Ukraine.”

keep shipping routes tangled and parts scarce. Ukraine is an important producer of neon, which could keep computer chips in short supply, perpetuating the shortages that have plagued automakers. Higher energy costs could ricochet through other industries.

Even without further supply chain troubles, there are signs that inflation is widening beyond a few pandemic-affected sectors, an indication that they could last as the latest virus surge fades from view. Rent of primary residences, for instance, climbed by 0.6 percent from the prior month — the fastest monthly pace of growth since 1999.

Price gains have been rapid around much of the world, causing many central banks to scale back how much help they are providing to their economies. The European Central Bank on Thursday decided to speed up its exit from its bond-buying program as it tries to counter rising inflation. Europe’s push to end its energy dependence on Russia promises to raise costs at a time when inflation is already nearly triple the central bank’s target.

a separate inflation index, but one that is also up considerably.

For someone who was a longtime Manhattanite, that’s a real loss, Mr. Gutbrod, 61, said. He used to enjoy three restaurant brunches or dinners each week. Now it’s more like one every two weeks.

“I used to go on relaxing drives,” he said, but now joy rides are unaffordable. “I’m on a shoestring budget, and I work pretty hard. For anyone who doesn’t make a lot of money, you have to be intelligent and start cutting corners.”

As it disturbs everyday lives, inflation is likely to dog Democrats and the administration as they fight to retain control of Congress in November. Despite plentiful jobs and quickly rising wages, consumer confidence has fallen to itslowest level since the summer of 2011, when the economy was clambering back from the global financial crisis and Congress was bickering over lifting the nation’s debt ceiling.

That probably at least partly reflects the reality that pay is not quite keeping up with inflation for the typical worker, and that consumers are paying more at the pump, which tends to be a very salient cost for Americans.

In February, the cost of food rose, which is also difficult for consumers on tight budgets. Over the past year, grocery prices have increased by 8.6 percent, the largest yearly jump since the period ending in April 1981. Fresh fruit and dairy products became notably more expensive last month.

The White House has emphasized that it is trying to offset rising costs to the degree that it can.

But those changes have mostly helped around the edges, and as prices have shown little sign of moderating on their own, Fed officials have coalesced around the view that they will need to use their policies to cool off demand and keep today’s rapid inflation from becoming entrenched. That may limit the central bank’s room to react to any slowdown in growth prompted by uncertainty and high gas prices.

“They need to stay on track,” said Ms. Rosner-Warburton. “They don’t have as much leeway to respond to these risks, given how elevated inflation is.”

AUSTIN, Texas--(BUSINESS WIRE)--As the first multifamily management company to be recognized in the Public Relations and Marketing Excellence Awards, … END_OF_DOCUMENT_TOKEN_TO_BE_REPLACED

There have been whispers of cooling housing and rental prices in the San Francisco Bay Area, but that hasn't yet translated into practical, noticeable … END_OF_DOCUMENT_TOKEN_TO_BE_REPLACED

Cars pass in Independence Square at twilight in Kyiv, Ukraine, Monday, Oct. 31, 2022. Rolling ... [+] blackouts are increasing across Ukraine as the … END_OF_DOCUMENT_TOKEN_TO_BE_REPLACED