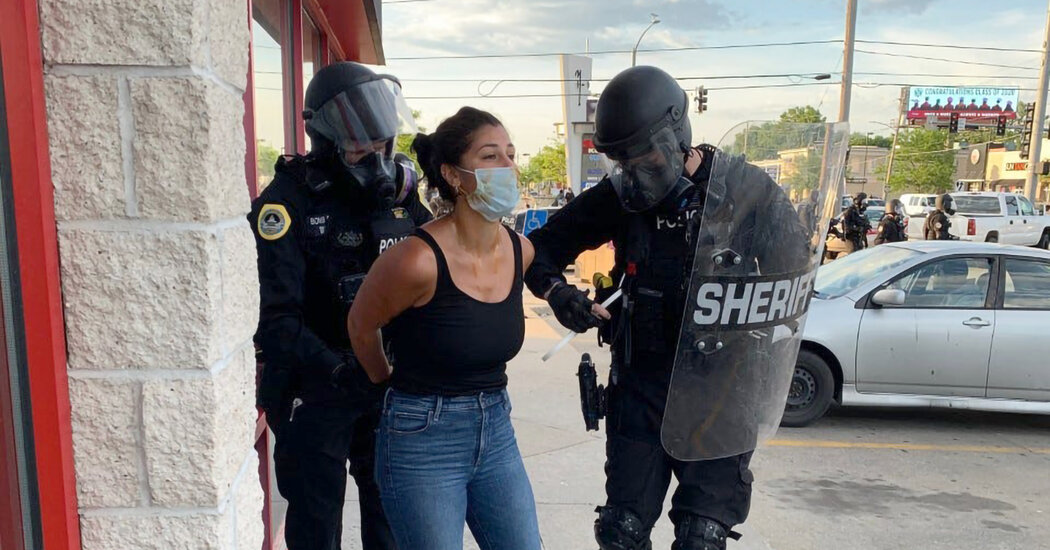 An Iowa jury acquitted a journalist on Wednesday in a highly unusual trial of a reporter who was arrested last spring as she covered a protest against racism and police violence.

Andrea Sahouri, a public safety reporter for The Des Moines Register, was arrested May 31 while covering a sometimes chaotic demonstration near the Merle Hay mall in downtown Des Moines. Police ordered protesters to disperse and used pepper spray against them. Ms. Sahouri, who said she identified herself as a reporter, was arrested along with her then-boyfriend, Spenser Robnett, who had accompanied her that day.

Ms. Sahouri, 25, pleaded not guilty to the misdemeanor charges of failing to disperse and interference with official acts, each punishable by up to 30 days in jail. On Wednesday, a six-person jury found Ms. Sahouri and Mr. Robnett not guilty of both charges.

“I’m thankful to the jury for doing the right thing,” Ms. Sahouri said in a statement after the verdict. “Their decision upholds freedom of the press and justice in our democracy.”

part of a nationwide movement that sprang up after the death of George Floyd, a Black man who was killed last May while in police custody in Minneapolis.

The Register decried the charges against Ms. Sahouri as “a violation of free press rights and a miscarriage of justice.”

The trial, which took place at the Drake University Legal Clinic in Iowa City, started on Monday, with Judge Lawrence P. McLellan presiding. It was also live-streamed.

body cam footage taken by another police officer that captured Ms. Sahouri stating that she was a journalist for The Register. “This is my job!” she shouted.

Amnesty International, said the prosecution represented “a clear violation of press freedom and fit a disturbing pattern of abuses against journalists by police in the U.S.A.”

The U.S. Press Freedom Tracker, a project comprising a number of press freedom organizations, said that 11 other journalists working for U.S. publications were facing criminal charges after being arrested while covering protests last year.

Kirstin McCudden, the managing editor of the U.S. Press Freedom Tracker, expressed concern about the prosecution of Ms. Sahouri. “It’s a concerning precedent for her to have not only been arrested and assaulted with pepper spray while reporting but then to also face trial,” she said.

Tomas Murawski, a reporter for The Alamance News in North Carolina, is among the other journalists facing prosecution. He was arrested Oct. 31 while covering a protest in Graham, N.C., and charged with resisting, delaying or obstructing a police officer. The case is set for a March 31 court hearing.

April Ehrlich, a reporter for Jefferson Public Radio in Ashland, Ore., was arrested Sept. 22 while reporting on a police action to clear homeless people from a park in Medford, Ore. Ms. Ehrlich, who won an Edward R. Murrow award last year, was charged with trespassing and resisting arrest. A pretrial conference hearing is scheduled for March 16.

Another journalist who has been charged is Richard Cummings, a freelance photographer. He was arrested June 1 while covering a demonstration in Worcester, Mass. He had a court hearing on Monday, and his next court date is April 20.

Thomas J. Healy, a constitutional law professor at Seton Hall University law school, said that arrests and prosecutions of journalists could have “a chilling effect on the press.”

“We rely on journalists to cover protests and the police response to protests,” he said. “This kind of transparency is how our democracy functions effectively.”

SAN FRANCISCO — Cleve Jones has lived in the Castro neighborhood for nearly 50 years, almost from the day he graduated from high school in Phoenix and … END_OF_DOCUMENT_TOKEN_TO_BE_REPLACED

A home inspection can spare you from unpleasant surprises after you buy. After crunching the numbers, searching your favorite neighborhoods, and … END_OF_DOCUMENT_TOKEN_TO_BE_REPLACED