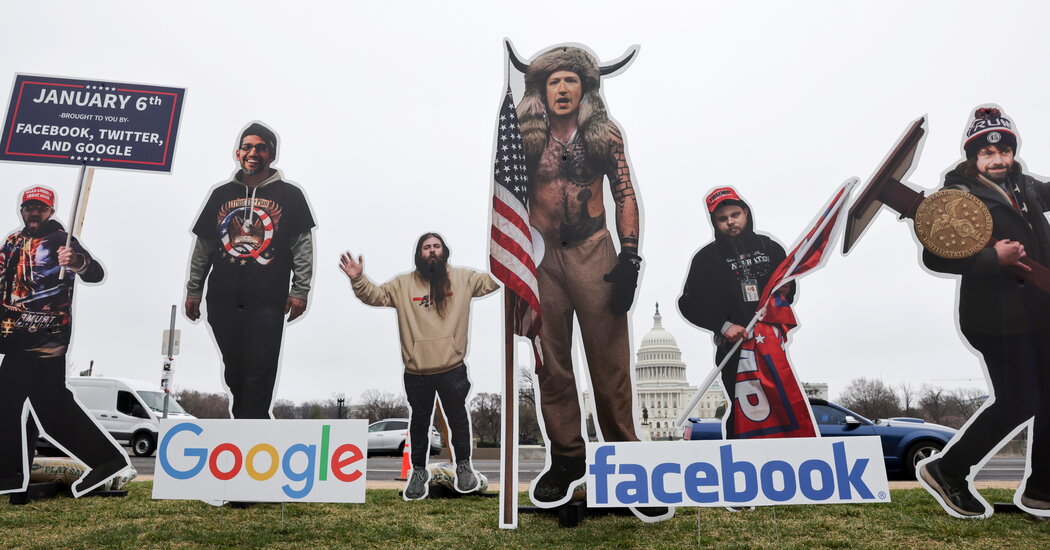 The leaders of Google, Facebook and Twitter testified on Thursday before a House committee in their first appearances on Capitol Hill since the start of the Biden administration. As expected, sparks flew.

The hearing was centered on questions of how to regulate disinformation online, although lawmakers also voiced concerns about the public-health effects of social media and the borderline-monopolistic practices of the largest tech companies.

On the subject of disinformation, Democratic legislators scolded the executives for the role their platforms played in spreading false claims about election fraud before the Capitol riot on Jan. 6. Jack Dorsey, the chief executive of Twitter, admitted that his company had been partly responsible for helping to circulate disinformation and plans for the Capitol attack. “But you also have to take into consideration the broader ecosystem,” he added. Sundar Pichai and Mark Zuckerberg, the top executives at Google and Facebook, avoided answering the question directly.

Lawmakers on both sides of the aisle returned often to the possibility of jettisoning or overhauling Section 230 of the Communications Decency Act, a federal law that for 25 years has granted immunity to tech companies for any harm caused by speech that’s hosted on their platforms.

393 million, to be precise, which is more than one per person and about 46 percent of all civilian-owned firearms in the world. As researchers at the Harvard T.H. Chan School of Public Health have put it, “more guns = more homicide” and “more guns = more suicide.”

But when it comes to understanding the causes of America’s political inertia on the issue, the lines of thought become a little more tangled. Some of them are easy to follow: There’s the line about the Senate, of course, which gives large states that favor gun regulation the same number of representatives as small states that don’t. There’s also the line about the National Rifle Association, which some gun control proponents have cast — arguably incorrectly — as the sine qua non of our national deadlock.

But there may be a psychological thread, too. Research has found that after a mass shooting, people who don’t own guns tend to identify the general availability of guns as the culprit. Gun owners, on the other hand, are more likely to blame other factors, such as popular culture or parenting.

Americans who support gun regulations also don’t prioritize the issue at the polls as much as Americans who oppose them, so gun rights advocates tend to win out. Or, in the words of Robert Gebelhoff of The Washington Post, “Gun reform doesn’t happen because Americans don’t want it enough.”

SAN FRANCISCO — Cleve Jones has lived in the Castro neighborhood for nearly 50 years, almost from the day he graduated from high school in Phoenix and … END_OF_DOCUMENT_TOKEN_TO_BE_REPLACED

A home inspection can spare you from unpleasant surprises after you buy. After crunching the numbers, searching your favorite neighborhoods, and … END_OF_DOCUMENT_TOKEN_TO_BE_REPLACED