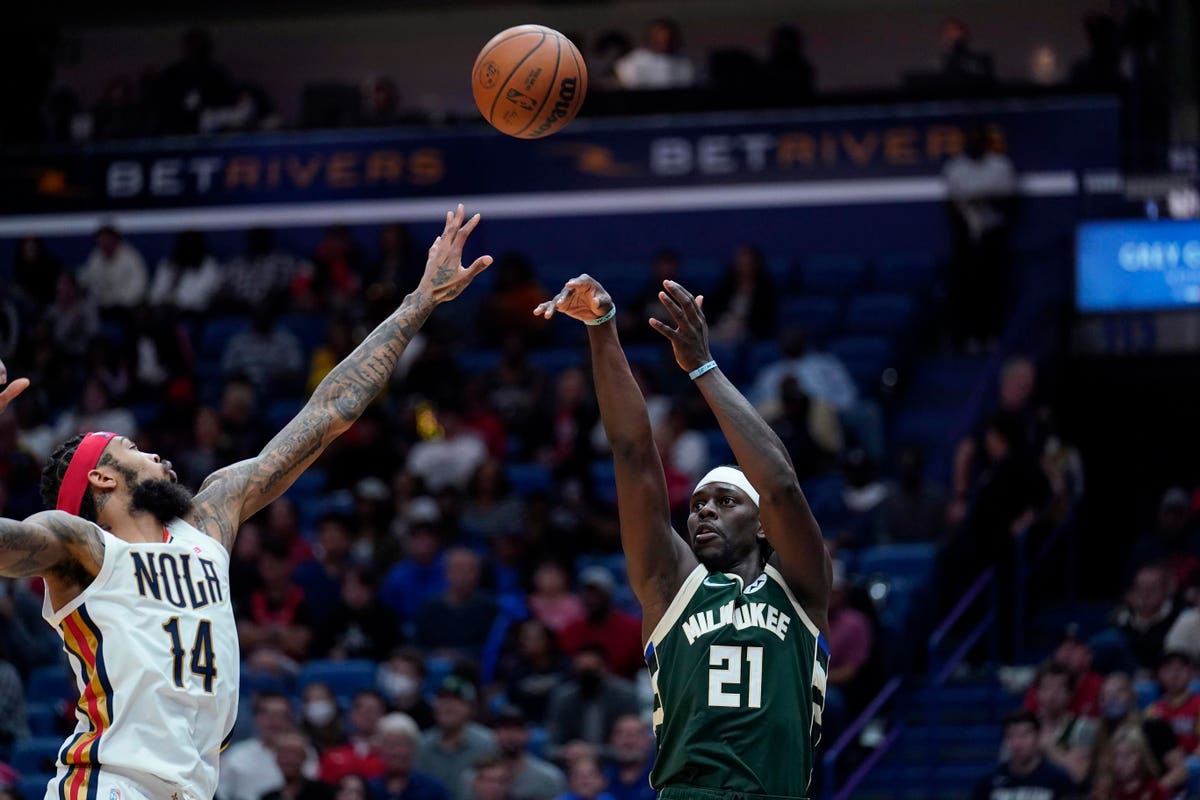 With the Milwaukee Bucks decimated by injuries—a seemingly never-ending adventure for them this season—one man has risen above everyone else to come to the challenge. Jrue Holiday!

It’s already been well-documented how Holiday got off to an extremely slow start following an abbreviated offseason and a couple of lower body injuries to begin the 2021-22 campaign. Through his first 11 games this season, he only averaged 13 points, 3.9 rebounds and 5.7 assists per game while shooting 32.1 percent from the three-point line and a putrid 37.8 percent overall.

He’s since turned on the jets and has carried the short-handed Bucks in a number of games. Beginning with their November 22nd contest against the Orlando Magic, Holiday has averaged 20.7 points, 4.9 rebounds and 7 assists per game while shooting 38.1 percent from downtown and 54.4 percent from the field overall.

Holiday has been forced into carrying the load with a number of guys out due to various injuries and health and safety protocols. Khris Middleton has missed the last two games with a knee injury (don’t worry Bucks’ fans, he should return very soon) while Giannis Antetokounmpo has missed four games and counting during that stretch, and Bobby Portis missed the last contest due to health and safety protocols. Oh, and Donte DiVincenzo hasn’t played yet this season and Brook Lopez continues to be out indefinitely.

Milwaukee isn’t the only team experiencing these issues, but it has put a heavy burden on whomever they have had available. After being mostly healthy throughout Mike Budenholzer’s first three years, this is a different type of challenge for the team.

At 19-12, the Bucks are staying afloat near the top of the Eastern Conference Standings. They are tied with the Chicago Bulls for second and three games behind the Brooklyn Nets in first.

Back to Holiday. He’s undoubtedly playing the best ball of his short Bucks’ tenure and probably the best he’s ever played in his career.

He’s coming off a career-high 40 points (while also accounting for five rebounds and five assists) in a thrilling overtime loss to the New Orleans Pelicans. He was nearly unstoppable in that game, getting to the lane almost at will and connecting on a number of nifty finishes both around the rim and from the mid-range.

For all the defensive attention he’s received since the Bucks’ championship run (and rightfully so), his offense has become underrated. To be fair, he had a number of stinkers throughout the playoffs, but he’s come to rediscover his offensive touch over the last 14 games. Over that span, he’s scored 26 or more points on four occasions and at least 20 points in eight of those games. Not bad for someone who couldn’t hit the water if he fell out of a boat earlier in the season.

Perhaps, the way he’s been doing it has been most impressive.

Holiday isn’t somebody who is going to blow by his man on the perimeter with a quick first step or elite quickness. Instead, he has to rely on just enough quickness to get an edge on his man, elite guard strength to bully his way close (enough) to the rim, and an underrated bag of step-backs, cross-overs, between the leg dribbles and footwork to create an opening for his shot.

In the above play, the Pelicans switch Brandon Ingram and his 7-foot-3 wingspan onto Holiday in the left corner. No matter, Holiday stuns his defender with an in-and-out dribble to get him a bit off balance, takes one more dribble toward the hoop and then hits him with a step-back that nearly takes him out of bounds to the baseline. At this point, Holiday not only has to contend with Ingram’s long arms, but now he’s also shooting over the corner of the backboard. Cool as the other side of the pillow, he drains the shot and brings the Bucks to within two points with less than four minutes to play.

Oh, and that touch. That sweet, sweet touch he has. When a shot is released from his hands you sometimes wonder if that baby is going to touch the clouds. Instead, it has found its way to the bottom of the net more times than not during this hot stretch.

All of this has resulted in elite efficiency for the current lone standing member of the Bucks’ big three. Since November 22nd, he’s been a fiend no matter where he’s shot the ball. According to Cleaning the Glass, he ranks in the 66th percentile among point guards when it comes to finishing around the rim, the 100th percentile in the mid-range, and the 61st percentile behind the three-point line. All of this to say that his 59.7 percent effective field goal percentage has ranked in the 97th percentile among point guards over that span.

Milwaukee has needed very point of this scoring outburst, as they scratch tooth and nail to keep up in the Eastern Conference Standings. Although they won the NBA championship last year as the 3-seed, they’d prefer to at least have home court advantage in the second round of the playoffs.

With a lot of basketball left to be played before the seeding is finalized, sit back, relax, and enjoy the (Jrue) Holiday season.

Many property purchasers in Alaska possess the same vision: Either hunker down away from the madding crowds in a refined log cabin or operate a … END_OF_DOCUMENT_TOKEN_TO_BE_REPLACED