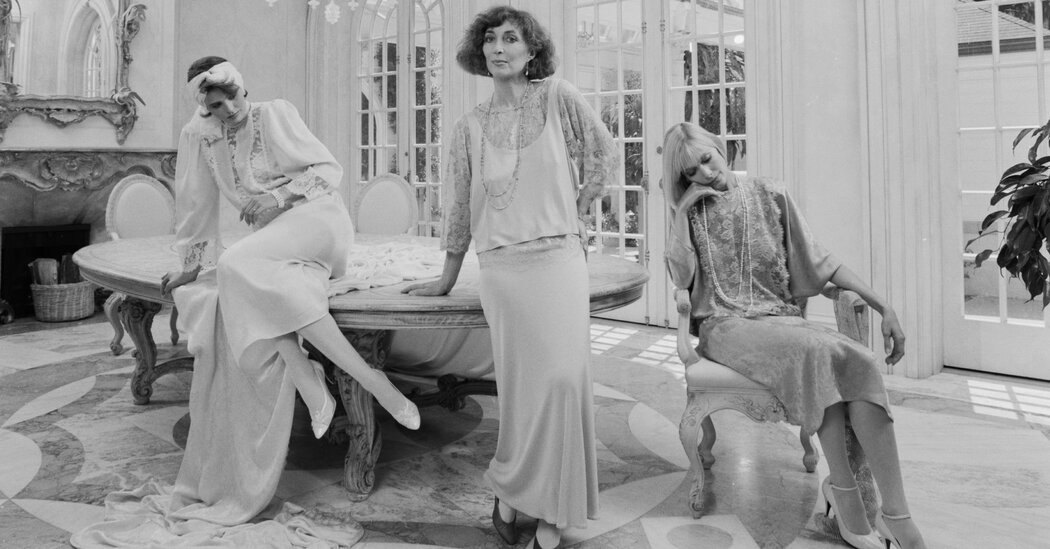 Jessica McClintock, a fashion designer whose romantic, lacy confections dressed generations of women for their weddings and proms, died on Feb. 16 at her home in San Francisco. She was 90.

The cause was congestive heart failure, said her sister, Mary Santoro.

In 1969, Ms. McClintock was a newly divorced mother and had been teaching science and music to sixth graders in Cupertino, Calif., when she invested $5,000 in a San Francisco dress business called Gunne Sax. (In creating the name, the founders, Eleanor Bailey and Carol Miller, had riffed on the idea of a “sexy gunny sack,” according to Vogue magazine.)

Soon after, Ms. McClintock became the sole owner, designer and saleswoman. She had no design training, but she could sew.

Inspired by those she called San Francisco’s “flower children,” she began making calico, lace and beribboned pastiches known as granny dresses. It was a style — a little bit Victorian, a little bit prairie — that hippies in the Haight-Ashbury section had popularized by putting together the wares of vintage clothing stores.

Dorothy Rodham, said no way: She had to wear something new for her wedding.

Representative Jackie Speier, who serves California’s 14th District, in the Bay Area. Ms. McClintock designed a wedding dress for her. (Ms. Speier called her “the fashion designer for Democrats” because of her inclusive price points, though Ms. McClintock was a registered Republican.)

Vanna White, who has made a career out of elegantly flipping the letters on the game show “Wheel of Fortune” clad in satiny sheaths, did so for a time in Jessica McClintock gowns.

But Ms. McClintock’s bread and butter was also in gussying up young women for their proms and quinceañeras and even elementary school graduations, particularly in the heyday of the 70s, as they danced to Fleetwood Mac or Peter Frampton, their hair done in Dorothy Hamill-style bobs.

As the decades marched along, so did Ms. McClintock’s styles, from pale Victorians and Great Gatsby-esque satins in the 1970s to poofy silk taffeta in the ’80s to more streamlined dresses in iridescent silk in the ’90s and beyond.

In 1999, when her business, a private company, turned 30, sales were at $140 million, according to Women’s Wear Daily. She operated 26 stores around the country, marketed a fragrance, Jessica, and had licensing agreements for handbags, jewelry, china, eyeglasses, bedding and home furnishings.

In addition to her sister, Ms. McClintock is survived by her son. Her longtime partner, Ben Golluber, who was chief financial officer of the company, died in 1998.

Ms. McClintock retired from the day to day management of her company in 2013, only to return a year later.

Since the early 1980s, the company headquarters were in a commercial building in San Francisco’s Potrero Hill neighborhood, but Ms. McClintock sold the space in about 2016 and thereafter ran the business from her home office.

She lived in a Queen Anne Victorian house in Pacific Heights, which she bought from the filmmaker Francis Ford Coppola. With a decorator’s help she turned it into a romantic fantasy, with Venetian chandeliers, billowing pink satin curtains, inlaid marble floors and Aubusson carpets — just the right backdrop for the Old World fashions she favored.

“I have a romantic feeling about life,” Ms. McClintock told a reporter in 2007. “I like Merchant-Ivory movies and candlelight and beautiful rooms. I like the patina of age.”

Chief Covelli said Mr. Crimo planned the shooting for several weeks, but that the authorities had not yet established what his motive was. “We have no … END_OF_DOCUMENT_TOKEN_TO_BE_REPLACED

Kevin McKenzie and Martine van Hamel were standing in the dining room of their weekend house in Woodstock, N.Y., trying to figure out when they got … END_OF_DOCUMENT_TOKEN_TO_BE_REPLACED