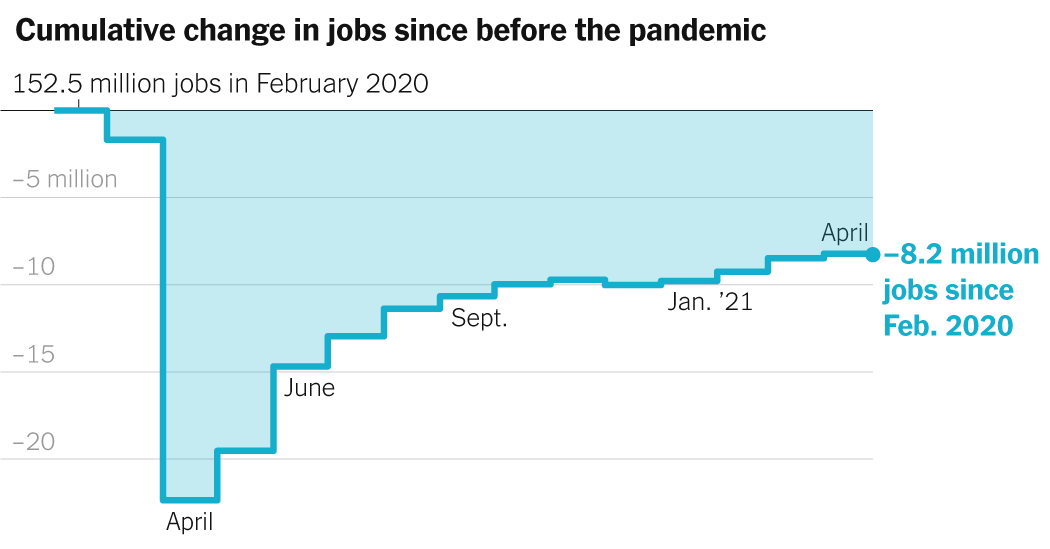 Despite the falloff in applicants, he is confident the company will get the workers it needs. “Our funnel hasn’t been filling as fast but there’s been no major service disruptions,” he said.

Gail Myer, whose family owns six hotels in Branson, Mo., has been having more trouble. “I talk to people all over the country on a regular basis in the hospitality industry, and the No. 1 topic of discussion is shortage of labor,” he said.

Before the pandemic, Mr. Myer said, there were about 150 full-time employees at his six hotels, but now staffing is down about 15 percent. Jobs at Myer Hospitality for housekeepers, breakfast attendants and receptionists are advertised as paying $12.75 to $14 an hour, plus benefits and a $500 signing bonus.

Returning to work is not yet an option for Lauren Fine, an education consultant in Denver. Ms. Fine, who is single and has a toddler, lost her job early in the pandemic. She initially collected unemployment benefits, but for the last nine months she has cobbled together jobs like tutoring and contract work.

She said she has been making less than half of her previous salary, creating something of an inescapable cycle: She cannot afford to send her son to day care for more than two days a week, and her child-care responsibilities are preventing her from taking a full-time job. In addition, she said, she has an autoimmune illness, making the possibility of contracting Covid-19 in the workplace especially harrowing.

“I like to say it’s just like spinning plates,” she said. Ms. Fine is considering giving up looking for a full-time job for the next year, until her son is old enough to attend school five days a week.

Jillian Melton worked for six years at a restaurant in Memphis before the pandemic, but she said the danger of infection coupled with low pay and babysitter costs make working not worth the risk right now. She is at home caring for her five children, including one with asthma, and her 93-year-old grandmother.

SEATTLE--(BUSINESS WIRE)--(NASDAQ: RDFN) —The housing market turned a corner in April as the inventory crunch showed signs of easing, according to a … END_OF_DOCUMENT_TOKEN_TO_BE_REPLACED

We present a chance to live like Rocky Mountain royalty right in the heart of Denver. “You don't see a lot of castles in the middle of Denver—and this … END_OF_DOCUMENT_TOKEN_TO_BE_REPLACED