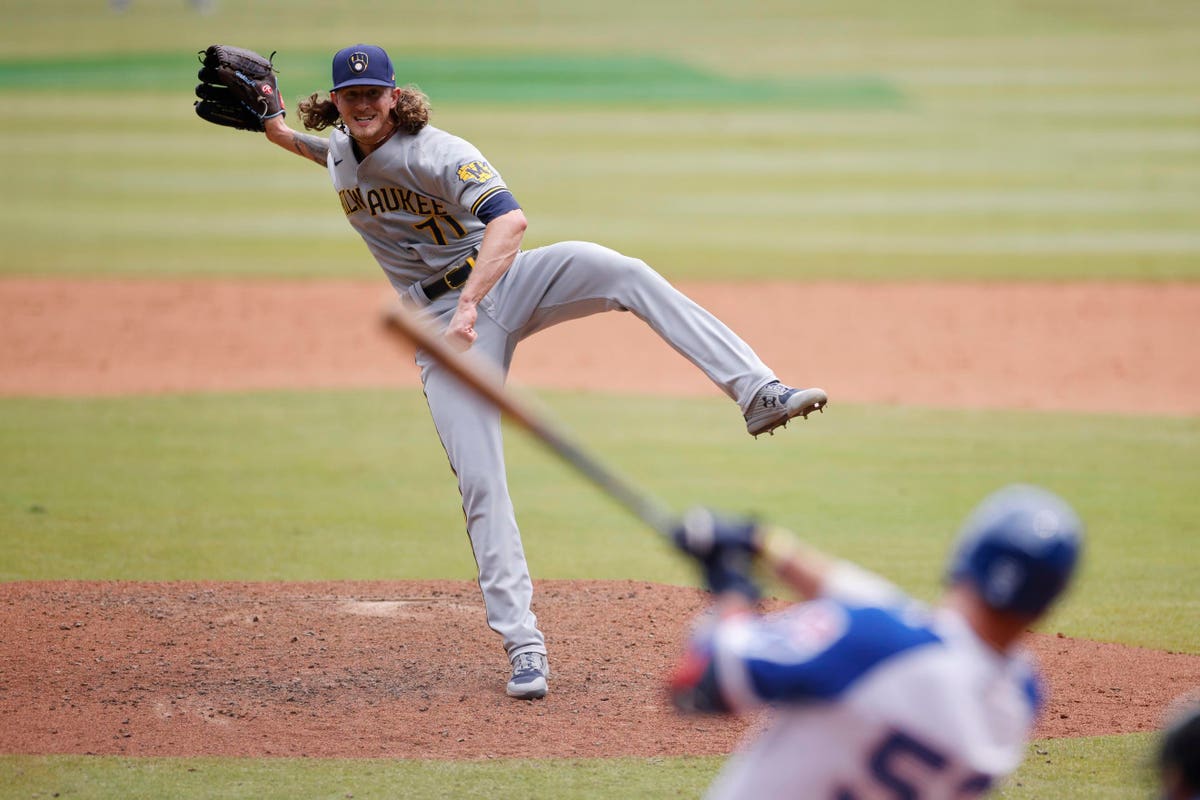 The last thing John Axford expected when the 2021 Major League Baseball season began was being back on a big league roster and doing so with the Milwaukee Brewers, the team with whom his career began, hadn’t even crossed his mind.

Yet, there he was Tuesday afternoon, sporting a Brewers hat while sitting comfortably on a bench atop the steps of the home dugout at American Family Field, talking to reporters after the most unlikely of trades resulted in his return to the big leagues and a city where he’s still revered, on and off the field

“It’s been five years since I’ve been back here, even as a visitor, so it’s pretty incredible,” Axford said. “Just being back on a big league field, it’s pretty great … to be back here and put on this uniform again.

Axford, 38, hadn’t pitched in the majors since 2018, when he closed out the season allowing seven runs over 3 2/3 innings in five appearances for the Dodgers. His 2019 season was limited to just one rehab start thanks to an elbow injury and the pandemic wiped out his entire 2020 season.

Though he didn’t officially retire, Axford signed on to serve as a TV analyst for Blue Jays games this season. He stepped aside from that role temporarily to play for Team Canada in an Olympic Baseball Qualifier but pitched well enough in those games to earn a minor league deal with the Blue Jays, who signed him on June 24

“I was supposed to pick up some more (TV) games in the second half,” Axford said. “It wasn’t until I was (in Florida with Team Canada) and throwing 95-96 and then 96-98 that I felt, ‘oh wow, my still was stuff kind of here. I feel good. I felt physically great.’

“I got home after that Florida trip and I got cold called by a couple of teams saying, ‘Hey, we saw you and we’re interested.”

He went 1-0 with an 0.84 ERA in nine appearances with Triple-A Buffalo, striking out 14 batters in 10 2/3 innings thanks to a fastball that looks a lot like the one he threw during his halcyon days with the Brewers, when he set the franchise’s single-season record with 46 saves.

Ideally, Axford would have made his return to MLB in a Blue Jays uniform which would have allowed him to remain close to his family. The Blue Jays weren’t willing to add him to their active roster so Axford exercised a clause in his contract that allowed him to seek big league opportunities elsewhere and it just so happened that Milwaukee had a need.

“Two days ago I heard Brewers were interested and they wanted to bring me to the big leagues,” Axford said. “So after that, it was just kind of formulating how that was going to work and the Brewers and the Blue Jays talked, and now I’m here.

The Brewers’ need stemmed in part because of a never-ending search by president of baseball operations David Stearns to add bullpen depth, which had been depleted over the weekend when Milwaukee lost right-handers Hunter Strickland, Jake Cousins and Jandal Gustave to COVID-19 tests or exposure.

The situation took a turn Tuesday morning when closer Josh Hader also tested positive during a round of post-road-trip intake screening. “”

“We’ve dealt with this off and on throughout the year, whether it was injuries and now COVID,” manager Craig Counsell said. “So other guys are going to get the ball and have to step up.”

That means not only does Axford get a chance to return to the major leagues, in the city where he had his greatest success, he’ll also have a chance to do it while filling a role in which he excelled.

“Axe is a guy who perseveres and he’s a guy who’s never taken his opportunity to play baseball for granted,” said Counsell, who was Axford’s teammate in Milwaukee for two seasons. “He’s had some road blocks along the way like most players do but he’s kept going. It’s a credit to him to keep going. That’s the thing, you can be doing something else and still have your eye on it, especially as a pitcher but he had to let himself heal, to get healthy, to know when his body was ready to do this again, to attack this again. He fortunately got an opportunity with the Blue Jays. It started with the Olympic Team, he got an opportunity to start pitching again and do what he does.”

It’s the kind of story that even a noted film aficionado like Axford, who earned a degree in film, television and theatre from Notre Dame and has generated social media notoriety for his annual Oscar picks, finds a little too hard to believe.

“It’s happened so quickly it’s hard to process and put into words sometimes. But I’m standing in the field for batting practice and kind of soaking in the stadium once again for the first time in a while, I’m getting to feel it a little bit. But movies? I don’t know. I still don’t know if it’s a movie.”

Jesse Tyler Ferguson, one of the stars of “Modern Family,” is once again searching for a buyer for his Manhattan pied-à-terre. It’s back on the market … END_OF_DOCUMENT_TOKEN_TO_BE_REPLACED

Tom Holland in Spider-Man No Way Home Sony Sony and Marvel’s Spider-Man: No Way Home topped the box office yet again in this unfortunately empty … END_OF_DOCUMENT_TOKEN_TO_BE_REPLACED