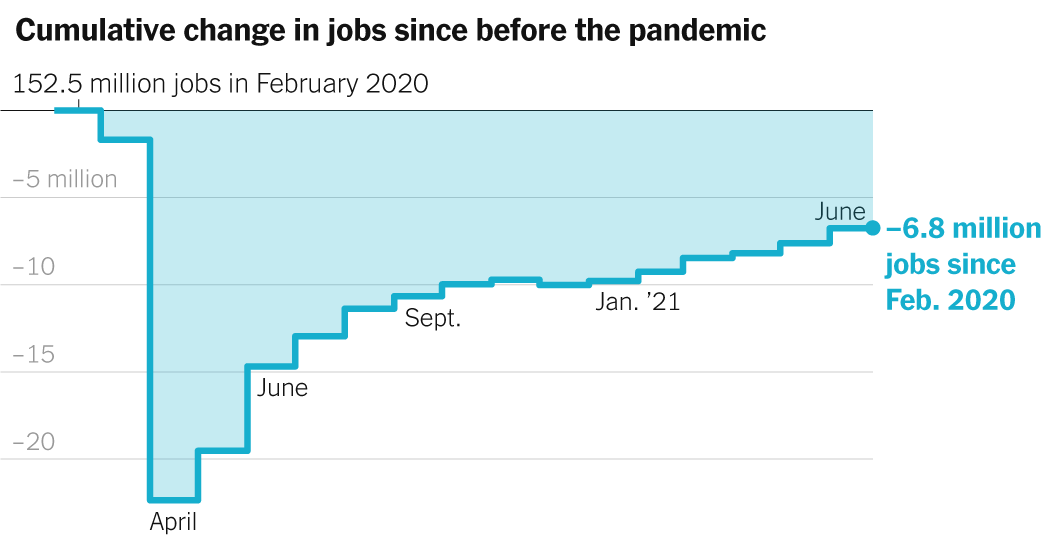 Anxieties over a lag in hiring lifted on Friday as the government reported that employers added 850,000 workers in June, the largest monthly gain since last summer.

Wages jumped for the third month in a row, a sign that employers are trying to attract applicants with higher pay and that workers are gaining bargaining power.

Rising Covid-19 vaccination rates and a growing appetite for travel, dining out, celebrations and entertainment gave a particular boost to leisure and hospitality businesses. The biggest chunk of June’s gains — 343,000 — could be found there.

accelerated rate of early retirements means that some of those workers will never come back.

“Today there are more job openings than before the pandemic and fewer people in the labor force,” said Becky Frankiewicz, president of the staffing company ManpowerGroup North America. “The single defining challenge for employers is enticing American workers back to the work force.”

The report follows several promising economic developments this week. Consumer confidence, which surged in June, is at its highest point since the pandemic’s onset last year. Stocks closed out the first half of the year at record highs. And the Congressional Budget Office said Thursday that the economy was on track to recover all the jobs lost in the pandemic by the middle of next year.

But economists cautioned against trying to divine the complex currents crisscrossing the labor market from a single month’s data, particularly given how much the pandemic has disrupted employment patterns.

may reflect smaller-than-expected layoffs rather than big gains. Over a longer period, employment in both public and private education remains significantly below its prepandemic level.

remarks from the White House.

The June figures are unlikely to allay the concerns of small-business owners and managers who complain about the difficulty finding workers. Nearly half report that they cannot fill openings, according to a recent survey by the National Federation of Independent Business.

The competition for workers has pushed up wages. Average hourly earnings climbed 3.6 percent in the year through June and 0.3 percent over the month. Low-wage workers seem to be the biggest beneficiaries of the bump in pay.

Ms. Frankiewicz of ManpowerGroup said the rise of “superemployers” like Amazon and Walmart was making it even more difficult for small and medium-size businesses to attract workers. In the summer of 2019, the top 25 employers had 10 percent of the open jobs, she said, while “today 10 employers do.”

moved to end distribution of federal pandemic-related jobless benefits even though they are funded until September, arguing that the assistance — including a $300 weekly supplement — was discouraging people from returning to work.

The latest jobs report did not reflect the cutoff’s impact because the government surveys were completed before any states ended benefits.

Staffing firms said they had not seen a pickup in job searches or hiring in states that have since withdrawn from the federal jobless programs.

Indeed surveyed 5,000 people in and out of the labor force and found that child care responsibilities, health concerns, vaccination rates and a financial cushion — from savings or public assistance — had all affected the number looking for work. Many employers are desperate to hire, but only 10 percent of workers surveyed said they were urgently seeking a job.

And even among that group, 20 percent said they didn’t want to take a position immediately.

Aside from ever-present concerns about pay and benefits, workers are particularly interested in jobs that allow them to work remotely at least some of the time. In a survey of more than 1,200 people by the staffing company Randstad, roughly half said they preferred a flexible work arrangement that didn’t require them to be on site full time.

Some employers are getting creative with work arrangements in response, said Karen Fichuk, chief executive of Randstad North America. One employer changed the standard shift to match the bus schedule so employees could get to work more easily. Others adjusted hours to make it easier for parents with child care demands.

Health and safety concerns are also on the minds of workers whose jobs require face-to-face interactions, the survey found.

Black and Hispanic workers, who were disproportionately affected by the coronavirus and by job losses, are having trouble regaining their foothold. “The Black unemployment rate is still exceptionally high,” at 9.2 percent compared with 5.2 percent for white workers, said Michelle Holder, an economist at John Jay College in New York.

One factor in the elevated Black jobless rate is that the ranks of Black workers employed or seeking jobs grew sharply last month. But participation in the labor force remains lower than it was before the pandemic among all major racial and ethnic groups.

Professor Holder said some people were reluctant to rejoin the labor force because of the quality and the pay of the work available.

Whether you optimistically hope that mortgage rates will decline or are resigned that rates will stay elevated above the historic lows of 2021, you … END_OF_DOCUMENT_TOKEN_TO_BE_REPLACED