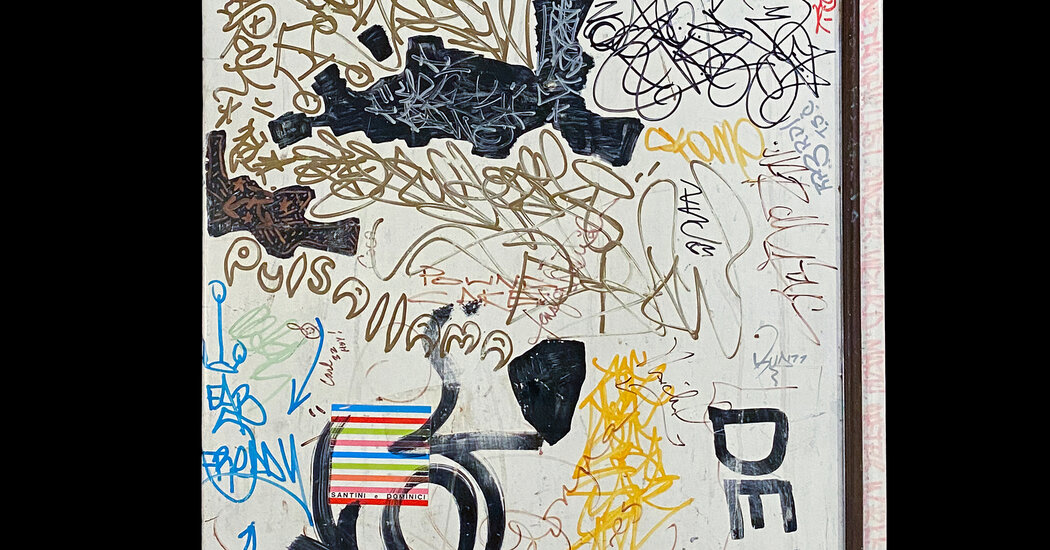 It began life began as a white refrigerator door in an apartment in SoHo, but by the 1990s, it was anything but plain. It was covered with the graffiti tags and wide-marker signatures of the famous friends of the tenant in the apartment. “Madonna Loves Keith,” read one inscription.

Yes, that Madonna. The tenant was the artist Keith Haring, a star of the SoHo art scene, who partied with Andy Warhol and graffiti artists like LA II (whose real name is Angel Ortiz) and Fab Five Freddy (Fred Brathwaite), both of whom signed the refrigerator. Also on the door are the letters JM, which the auctioneer Arlan Ettinger, in an interview, speculated had belonged to Jean-Michel Basquiat, the downtown artist who became a megawatt celebrity. (Ettinger said he had tried to verify the Basquiat signature but that “there’s no way of absolutely confirming” it’s his writing or not.)

Ettinger, who will sell the refrigerator door on Wednesday at Guernsey’s, said the door served as Haring’s guest register. “It seemed like everybody who was anybody showed up there,” he said, “and you signed in on that refrigerator door. It’s not beautiful, but it’s of that moment, of that time. It reflects a certain spirit, a creativeness, that is alive today if you think about the people who were there — Madonna, and a long, long list of artists.”

Ettinger said the owner, a yoga instructor in California, had insisted on privacy, so much so that he said he did not even know her name. He said his contract to sell the door was with a friend of the owner who forwarded an email describing how the owner had found the apartment on Broome Street — she saw an ad for a “spacious railroad apartment” in The Village Voice in 1990. It came with “this amazing refrigerator covered with the graffiti of the Haring era.” The walls had once been covered, too, but she said that the landlord had repainted them.

She returned home one sweltering day to learn that the refrigerator had conked out and was removed; the delivery men had left it on the street to be picked up with the garbage.

“I raced outside,” the email said. “There, in the back alley, was our old friend, the Haring fridge, lying on its side. The door slipped off the body of the fridge easily. I brought it upstairs while my roommate retrieved the smaller top freezer door.”

In 1993, when she moved to California, she carted the door to her parents’ home in Washington, and stored it in their attic, where it stayed until about 2010, when her mother shipped it to her.

Andy Warhol, whose signature is also on the refrigerator door, figures in another item in the auction: A moose head he owned. The auction will be conducted online through Liveauctioneers.com and Invaluable.com, and by telephone from Guernsey’s. Ettinger’s estimate for the refrigerator door is “in the hundreds of thousands of dollars.”

AUSTIN, Texas--(BUSINESS WIRE)--As the first multifamily management company to be recognized in the Public Relations and Marketing Excellence Awards, … END_OF_DOCUMENT_TOKEN_TO_BE_REPLACED

There have been whispers of cooling housing and rental prices in the San Francisco Bay Area, but that hasn't yet translated into practical, noticeable … END_OF_DOCUMENT_TOKEN_TO_BE_REPLACED

Cars pass in Independence Square at twilight in Kyiv, Ukraine, Monday, Oct. 31, 2022. Rolling ... [+] blackouts are increasing across Ukraine as the … END_OF_DOCUMENT_TOKEN_TO_BE_REPLACED