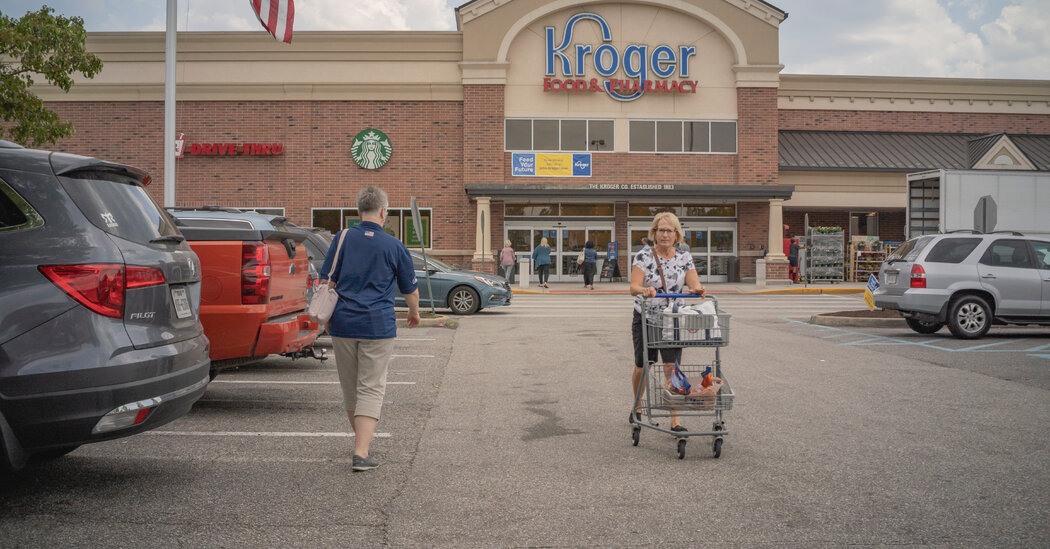 “Divestiture is always a bright idea for merging parties, and it’s not always a very good idea for consumers.,” he added.

Albertsons shares fell on Friday, a sign that investors are skeptical that the deal will get past regulators. By late morning, the stock was trading below $27 a share, more than 21 percent below Kroger’s $34.10 a share offer price.

In announcing the deal, Kroger also sought to ease concerns about the impact on consumers by saying that it expects to save about $500 million in costs, which it plans to use to “reduce prices for customers.” Whether it follows through with those plans will likely be a key focus for regulators.

Though cost savings in acquisitions often come from layoffs, the grocers may also point to fact that their workforces are unionized as part of their discussions with regulators. The Biden administration has been a significant proponent of unions. Neither Walmart nor Amazon are unionized on a large scale.

Consumer protection groups raised concerns about the deal following reports of a possible merger on Thursday. The American Economic Liberties Project, a nonprofit that promotes antitrust legislation, criticized it as a “bad deal for consumers, workers and communities.”

“There is no reason to allow two of the biggest supermarket chains in the country to merge — especially with food prices already soaring,” Sarah Miller, the group’s executive, said in a statement on Thursday.

As part of their pitch to regulators, Kroger and Albertsons will likely try to convince them that their scale is needed to compete against big box stores like Aldi, Lidl — two European chains that have been expanding quickly in the United States — and Costco, as well as Amazon.

The agency, though, has not always allowed retailers to use Amazon as a boogeyman to help clear their deals. In 2015, the F.T.C. successfully sued to block a merger between the retailers Office Depot and Staples, even after they had positioned the deal as an effort to take on Amazon and lower prices.

AUSTIN, Texas--(BUSINESS WIRE)--As the first multifamily management company to be recognized in the Public Relations and Marketing Excellence Awards, … END_OF_DOCUMENT_TOKEN_TO_BE_REPLACED

There have been whispers of cooling housing and rental prices in the San Francisco Bay Area, but that hasn't yet translated into practical, noticeable … END_OF_DOCUMENT_TOKEN_TO_BE_REPLACED

Cars pass in Independence Square at twilight in Kyiv, Ukraine, Monday, Oct. 31, 2022. Rolling ... [+] blackouts are increasing across Ukraine as the … END_OF_DOCUMENT_TOKEN_TO_BE_REPLACED