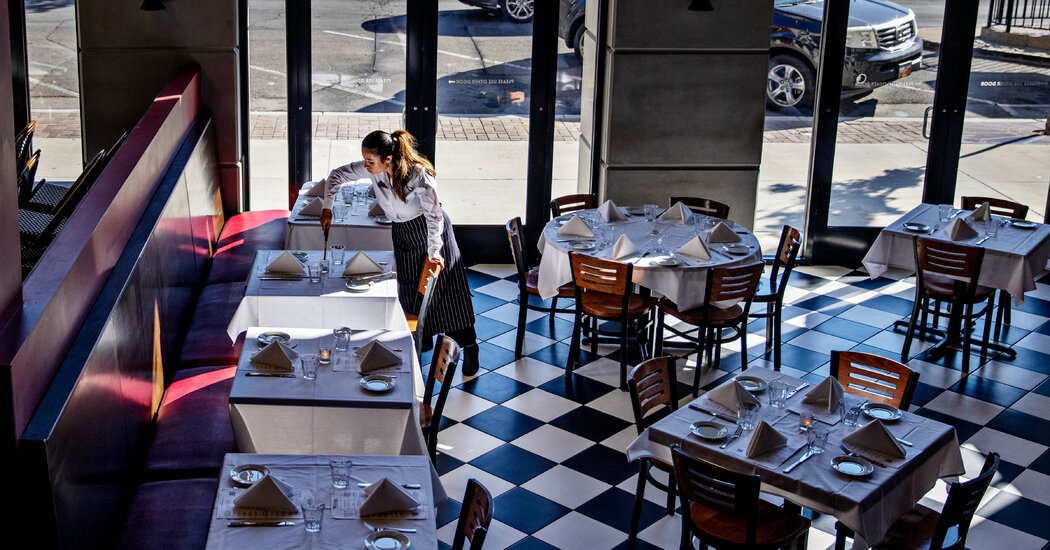 PROVO, Utah — Chad Pritchard and his colleagues are trying everything to staff their pizza shop and bistro, and as they do, they have turned to a new tactic: They avoid firing employees at all costs.

Infractions that previously would have led to a quick dismissal no longer do at the chef’s two places, Fat Daddy’s Pizzeria and Bistro Provenance. Consistent transportation issues have ceased to be a deal breaker. Workers who show up drunk these days are sent home to sober up.

Employers in Provo, a college town at the base of the Rocky Mountains where unemployment is near the lowest in the nation at 1.9 percent, have no room to lose workers. Bistro Provenance, which opened in September, has been unable to hire enough employees to open for lunch at all, or for dinner on Sundays and Mondays. The workers it has are often new to the industry, or young: On a recent Wednesday night, a 17-year-old could be found torching a crème brûlée.

Down the street, Mr. Pritchard’s pizza shop is now relying on an outside cleaner to help his thin staff tidy up. And up and down the wide avenue that separates the two restaurants, storefronts display “Help Wanted” signs or announce that the businesses have had to temporarily reduce their hours.

added 263,000 workers in September, fewer than in recent months but more than was normal before the pandemic. Unemployment is at 3.5 percent, matching the lowest level in 50 years, and average hourly earnings picked up at a solid 5 percent clip compared with a year earlier.

roughly 20 percent and sent unemployment to above 10 percent. Few economists expect an outcome that severe this time since today’s inflation burst has been shorter-lived and rates are not expected to climb nearly as much.

are still nearly two open jobs for every unemployed worker — companies may be hesitant to believe that any uptick in worker availability will last.

“There’s a lot of uncertainty about how big of a downturn are we facing,” said Benjamin Friedrich, an associate professor of strategy at Northwestern University’s Kellogg School of Management. “You kind of want to be ready when opportunities arise. The way I think about labor hoarding is, it has option value.”

Instead of firing, businesses may look for other ways to trim costs. Mr. Pritchard in Provo and his business partner, Janine Coons, said that if business fell off, their first resort would be to cut hours. Their second would be taking pay cuts themselves. Firing would be a last resort.

The pizzeria didn’t lay off workers during the pandemic, but Mr. Pritchard and Ms. Coons witnessed how punishing it can be to hire — and since all of their competitors have been learning the same lesson, they do not expect them to let go of their employees easily even if demand pulls back.

But economists warned that what employers think they will do before a slowdown and what they actually do when they start to experience financial pain could be two different things.

The idea that a tight labor market may leave businesses gun-shy about layoffs is untested. Some economists said that they could not recall any other downturn where employers broadly resisted culling their work force.

“It would be a pretty notable change to how employers responded in the past,” said Nick Bunker, director of North American economic research for the career site Indeed.

And even if they do not fire their full-time employees, companies have been making increased use of temporary or just-in-time help in recent months. Gusto, a small-business payroll and benefits platform, conducted an analysis of its clients and found that the ratio of contractors per employee had increased more than 60 percent since 2019.

If the economy slows, gigs for those temporary workers could dry up, prompting them to begin searching for full-time jobs — possibly causing unemployment or underemployment to rise even if nobody is officially fired.

Policymakers know a soft landing is a long shot. Jerome H. Powell, the Fed chair, acknowledged during his last news conference that the Fed’s own estimate of how much unemployment might rise in a downturn was a “modest increase in the unemployment rate from a historical perspective, given the expected decline in inflation.”

But he also added that “we see the current situation as outside of historical experience.”

The reasons for hope extend beyond labor hoarding. Because job openings are so unusually high right now, policymakers hope that workers can move into available positions even if some firms do begin layoffs as the labor market slows. Companies that have been desperate to hire for months — like Utah State Hospital in Provo — may swoop in to pick up anyone who is displaced.

Dallas Earnshaw and his colleagues at the psychiatric hospital have been struggling mightily to hire enough nurse’s aides and other workers, though raising pay and loosening recruitment standards have helped around the edges. Because he cannot hire enough people to expand in needed ways, Mr. Earnshaw is poised to snap up employees if the labor market cools.

But for the moment, workers remain hard to find. At the bistro and pizza shop in downtown Provo, what worries Mr. Pritchard is that labor will become so expensive that — combined with rapid ingredient inflation — it will be hard or impossible to make a profit without lifting prices on pizzas or prime rib so much that consumers cannot bear the change.

“What scares me most is not the economic slowdown,” he said. “It’s the hiring shortage that we have.”

AUSTIN, Texas--(BUSINESS WIRE)--As the first multifamily management company to be recognized in the Public Relations and Marketing Excellence Awards, … END_OF_DOCUMENT_TOKEN_TO_BE_REPLACED

There have been whispers of cooling housing and rental prices in the San Francisco Bay Area, but that hasn't yet translated into practical, noticeable … END_OF_DOCUMENT_TOKEN_TO_BE_REPLACED

Cars pass in Independence Square at twilight in Kyiv, Ukraine, Monday, Oct. 31, 2022. Rolling ... [+] blackouts are increasing across Ukraine as the … END_OF_DOCUMENT_TOKEN_TO_BE_REPLACED