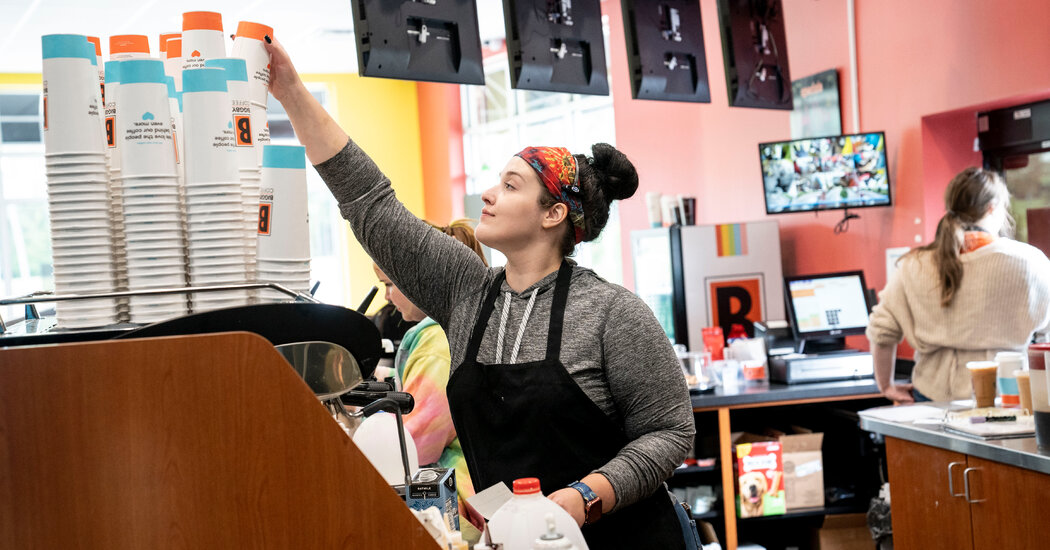 Last year, Klaussner Home Furnishings was so desperate for workers that it began renting billboards near its headquarters in Asheboro, N.C., to advertise job openings. The steep competition for labor drove wages for employees on the furniture maker’s production floor up 12 to 20 percent. The company began offering $1,000 signing bonuses to sweeten the deal.

But in recent months, Mr. Cybulski has noticed that frenzy die down.

Hiring for open positions has gotten easier, he said, and fewer Klaussner workers are leaving for other jobs. The company, which has about 1,100 employees, is testing performance rewards to keep workers happy rather than racing to increase wages. The $1,000 signing bonus ended in the spring.

“No one is really chasing employees to the dollar anymore,” he said.

By many measures, the labor market is still extraordinarily strong even as fears of a recession loom. The unemployment rate, which stood at 3.7 percent in August, remains near a five-decade low. There are twice as many job openings as unemployed workers available to fill them. Layoffs, despite some high-profile announcements in recent weeks, are close to a record low.

Walmart and Amazon have announced slowdowns in hiring; others, such as FedEx, have frozen hiring altogether. Americans in July quit their jobs at the lowest rate in more than a year, a sign that the period of rapid job switching, sometimes called the Great Resignation, may be nearing its end. Wage growth, which soared as companies competed for workers, has also slowed, particularly in industries like dining and travel where the job market was particularly hot last year.

More broadly, many companies around the country say they are finding it less arduous to attract and retain employees — partly because many are paring their hiring plans, and partly because the pool of available workers has grown as more people come off the economy’s sidelines. The labor force grew by more than three-quarters of a million people in August, the biggest gain since the early months of the pandemic. Some executives expect hiring to keep getting easier as the economy slows and layoffs pick up.

“Not that I wish ill on any people out there from a layoff perspective or whatever else, but I think there could be an opportunity for us to ramp some of that hiring over the coming months,” Eric Hart, then the chief financial officer at Expedia, told investors on the company’s earnings call in August.

Taken together, those signals point to an economic environment in which employers may be regaining some of the leverage they ceded to workers during the pandemic months. That is bad news for workers, particularly those at the bottom of the pay ladder who have been able to take advantage of the hot labor market to demand higher pay, more flexible schedules and other benefits. With inflation still high, weaker wage growth will mean that more workers will find their standard of living slipping.

But for employers — and for policymakers at the Federal Reserve — the calculation looks different. A modest cooling would be welcome after months in which employers struggled to find enough staff to meet strong demand, and in which rapid wage growth contributed to the fastest inflation in decades. Too pronounced a slowdown, however, could lead to a sharp rise in unemployment, which would almost certainly lead to a drop in consumer demand and create a new set of problems for employers.

Recent research from economists at the Federal Reserve Banks of Dallas and St. Louis found that there had been a huge increase in poaching — companies hiring workers away from other jobs — during the recent hiring boom. If companies become less willing to recruit workers from competitors, and to pay the premium that doing so requires, or if workers become less likely to hop between jobs, that could lead wage growth to ease even if layoffs don’t pick up.

There are hints that could be happening. A recent survey from another career site, ZipRecruiter, found that workers have become less confident in their ability to find a job and are putting more emphasis on finding a job they consider secure.

Some businesses, meanwhile, are becoming a bit less frantic to hire. A survey of small businesses from the National Federation of Independent Business found that while many employers still have open positions, fewer of them expect to fill those jobs in the next three months.

More clues about the strength of the labor market could come in the upcoming months, the time of year when companies, including retailers, traditionally ramp up hiring for the holiday season. Walmart said in September that this year it would hire a fraction of the workers it did during the last holiday season.

The signs of a cool-down extend even to leisure and hospitality, the sector where hiring challenges have been most acute. Openings in the sector have fallen sharply from the record levels of last year, and hourly earnings growth slowed to less than 9 percent in August from a rate of more than 16 percent last year.

Until recently, staffing shortages at Biggby Coffee were so severe that many of the chain’s 300-plus stores had to close early some days, or in some cases not open at all. But while hiring remains a challenge, the pressure has begun to ease, said Mike McFall, the company’s co-founder and co-chief executive. One franchisee recently told him that 22 of his 25 locations were fully staffed and that only one was experiencing a severe shortage.

“We are definitely feeling the burden is lifting in terms of getting people to take the job,” Mr. McFall said. “We’re getting more applications, we’re getting more people through training now.”

The shift is a welcome one for business owners like Mr. McFall. He said franchisees have had to raise wages 50 percent or more to attract and retain workers — a cost increase they have offset by raising prices.

“The expectation by the consumer is that you are raising prices, and so if you don’t take advantage of that moment, you are going to be in a pickle,” he said, referring to the pressure to increase wages. “So you manage it by raising prices.”

So far, Mr. McFall said, higher prices haven’t deterred customers. Still, he said, the period of severe staffing shortages is not without its costs. He has seen a loss in sales, as well as a loss of efficiency and experienced workers. That will take time to rebuild, he said.

“When we were in crisis, it was all we were focused on,” he said. “So now that it feels like the crisis is mitigating, that it’s getting a little better, we can now begin to focus on the culture in the stores and try to build that up again.”

AUSTIN, Texas--(BUSINESS WIRE)--As the first multifamily management company to be recognized in the Public Relations and Marketing Excellence Awards, … END_OF_DOCUMENT_TOKEN_TO_BE_REPLACED

There have been whispers of cooling housing and rental prices in the San Francisco Bay Area, but that hasn't yet translated into practical, noticeable … END_OF_DOCUMENT_TOKEN_TO_BE_REPLACED

Cars pass in Independence Square at twilight in Kyiv, Ukraine, Monday, Oct. 31, 2022. Rolling ... [+] blackouts are increasing across Ukraine as the … END_OF_DOCUMENT_TOKEN_TO_BE_REPLACED