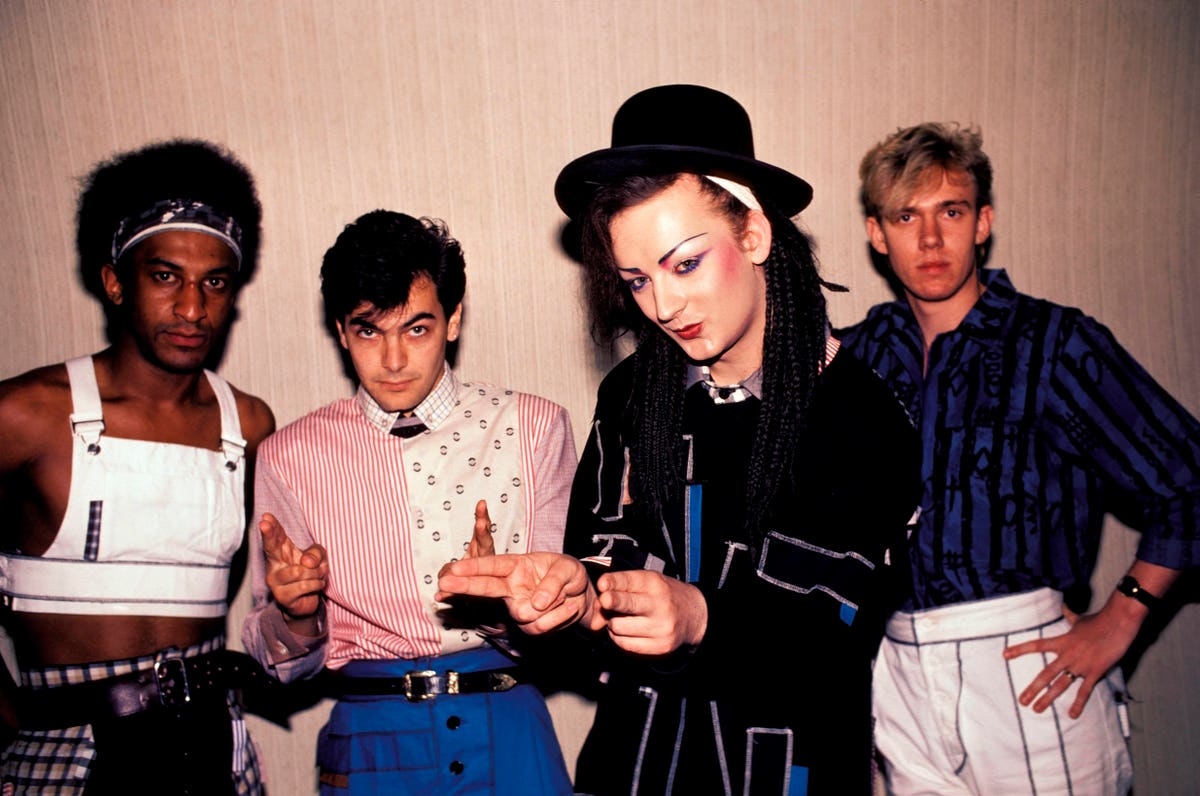 By 1984, the two most popular British bands in America were Culture Club and Duran Duran. Although quite different from each other musically, the two rival acts had several things in common: they were extremely photogenic with their distinct looks and fashions; they consistenly scored hit singles and made eye-catching videos; and they attracted predominantly young female fan bases. Both Culture Club and Duran Duran were the two leading acts of New Pop—a term coined by journalist Paul Morley to describe the music of ambitious, style-minded British artists who made shiny and accessible pop music in the first half of the 1980s. Along with Duran Duran and Culture Club, those New Pop acts—such as the Human League, Soft Cell, Eurythmics, Spandau Ballet, Frankie Goes to Hollywood and ABC— achieved popularity first in the U.K. and later in the U.S.

The British music journalist Dave Rimmer documented this lively and colorful U.K. pop music explosion as it was happening with his 1985 book Like Punk Never Happened: Culture Club and the New Pop. A writer for the British music weekly Smash Hits, Rimmer captured the zeitgeist of the movement through his fly-on-the-wall reporting on Culture Club—whose members consisted of Boy George, Mikey Craig, Jon Moss and Roy Hay—for about a three-year period. With his observations of Culture Club during their period of sell-out tours, intense media coverage and fan hysteria, Rimmer painted a portrait of a group at their absolute peak in his book.

Having been mostly out of print for decades, Like Punk Never Happened (whose title refers to the fact that most of the New Pop artists first emerged from the late 1970s punk rock era) has now been republished and expanded with a foreword by Neil Tennant (who was once a music journalist before he found fame as half of Pet Shop Boys) and the inclusion of Rimmer’s profile of Duran Duran from 1985 that originally appeared in the British culture magazine The Face.

“It was Neil Tennant that put it in Faber’s head,” Rimmer, who is based in Berlin, explains about the book’s republication. “He was doing a book of his lyrics for Faber, and while he was talking to them, he said: ‘You should republish Like Punk Never Happened.’ The book had been kind of forgotten about at Faber a little bit—this made everybody read it again and they decided, ‘Hey, this is a good book. We should republish it again.’ I suggested that I write a new afterword and that they include the Duran Duran piece that’s in there. Although it’s not directly thematically linked to the book, it’s certainly part of the same period of work, so it seemed to fit really.”

Both working for Smash Hits in the early 1980s, Rimmer and Tennant decided that the story of New Pop should be told through the lens of a particular act—in this case, Culture Club. “It was never meant to be any kind of straightforward pop biography,” says Rimmer. “I found that idea rather boring. The idea was always to write the book about the whole phenomenon using one band as an example of what we were talking about—a combination of music journalist memoir, pop biography, and description of the cultural ecosystem all wrapped up in an episodic and chronological narrative with a generous sprinkling of mischief on top.”

The first time Rimmer met Culture Club occurred in December 1982 when he traveled with them to New York City on their first visit to U.S.; the band members were coming off the smash success of their hit single “Do You Really Want to Hurt Me.” Of his initial impressions of Culture Club, Rimmer recalls: “George is quite a surprising character when you meet him. I always liked him, but he wasn’t the easiest person to get on with. Real temper, and he’d flip from one side of his persona to another quite easily. But it was clear that George was kind of like a force of nature, and then the people around him were trying to shape that, temper it a bit. It was Jon Moss who gave him focus on pop music. George’s initial impulse was to try and shock people, and he was sort of dissuaded from that by the other members of the band. In a way, that was an incredibly intelligent position to have a guy that looks vaguely shocking to a lot of people and then you do sweet pop music.

“I got to know them a lot better over the next couple of years and traveled with them to different places. Traveling with bands was always the best way to get to know them. You got more time with them, and then it also had the function of instead of being an outsider like coming in to interview them in some location they’ve been in England, you’d be traveling with them from England. So you become part of their entourage. You become part of the ‘us’ as opposed to the ‘them.’ It was definitely the best way to get to know people.”

As described in the book, between 1983 and 1985, Culture Club was one of the hottest pop groups in the world with such hits as “Do You Really Want to Hurt Me,” “Time (Clock of the Heart),” “I’ll Tumble 4 Ya” and “Karma Chameleon.” With his off-the-cuff yet accessible personality and charming charisma—not to mention his unique look of dreadlocks, androgynous makeup and patchwork baggy clothes—George was the most ubiquitous media celebrity outside of Princess Diana.

“It seemed to be kind of logical that they were successful,” Rimmer says of the band’s rise. “[George] was definitely a star. I may be surprised by how much America took to him. You got the impression a lot of American artists looked down on Britain as being too into clothes and the look and not enough into authentic rock and roll. So it was kind of a surprise that George went over so well in America. I guess part of that was because he was very good at doing interviews, coming over as an interesting character. Although that’s a fragile thing as well: if you build your career entirely on being a media personality, that can kind of turn against you quite quickly as well, which is what eventually happened to George.”

Heavily embedded with Culture Club during that period, Rimmer was a witness to the fan hysteria surrounding the group. “It was fascinating,” Rimmer recalls. “I was enjoying the excitement around it…I can remember at one point in Japan, there were loads of loads of Japanese fans who’d all come and did their own version of the Boy George look. I have to say that one very intelligent thing George did was that he made his look into something that people could do their version of. It wasn’t that difficult to kind of find some hair extensions and look a bit like Boy George.”

With Culture Club and Duran Duran leading the way, the New Pop phenomenon reached its high point during the week of July 16, 1983, when seven acts of British origin had hits in the Billboard Top 10. Outside of Michael Jackson during his imperial Thriller reign, British artists were dominating the pop music scene. “A lot of it was down to MTV,” Rimmer explains. “American bands weren’t equipped to deal with this visual media in the same way that the British ones were. The British ones spent a lot of time looking at their look and how that worked and so forth. American bands would be wearing jeans and ‘this-that-and-the-other.’ They just didn’t have the same kind of visual panache that George or Duran Duran had at that time. Also, British bands weren’t ashamed of being pop bands. It wasn’t trying to be rock music, it wasn’t trying to be authentic. It was supremely well-crafted pop music.”

The original edition of Like Punk Never Happened concluded in 1985, the same year as the massive Live Aid event that unofficially marked a turning point for the New Pop acts. By the end of 1986, the music scene had shifted from British New Pop to the emergence of dance music in the U.K., and the return of American music on the Billboard charts via such acts as Madonna, Prince and Bruce Springsteen. Meanwhile, Culture Club’s fortunes significantly changed following Boy George’s publicized drug issues and the group broke up soon afterward.

“It was always clear that George was holding himself back—that he didn’t want to kind of completely reveal himself or go wild for the sake of the band, for the sake of pop music,” says Rimmer. “On another level, before that, he had been very anti-drug and had a puritan side that Jon Moss very much reinforced. I think George having held himself back in order to be this kind of interesting but essentially harmless pop star… there was some part of him that was wound up really tight and about ready to let go.

“It surprised me more in a way that [Culture Club’s] songwriting tailed off so dramatically because their songs had been really good up to that point. Colour by Numbers [from 1983] is a great pop album. And then the one that follows it [1984’s Waking Up With the House on Fire] has like one good song on it or maybe one-and-a-half good songs. That in a way was more surprising to me than the fact that George’s public persona blew up and fractured.”

Much has changed in the decades after the New Pop phenomenon, especially with the advent of the internet and social media that have replaced the British music weeklies (nearly all of them now defunct) and MTV as the gatekeepers and influencers when it came to promoting acts. But the legacy of the New Pop artists continues to endure as Culture Club (who remain active following a late 1990s reunion), Duran Duran (who will be inducted into this year’s Rock and Roll Hall of Fame), and their contemporaries are still performing and making new music. “Culture Club had gone and come back again,” says Rimmer. “Duran Duran on the other hand have stayed together and are carried on performing all the time. Their tenacity is quite admirable.

“I’ve read the theory that you always like best the music that was popular when you were a teenager. I’m sure the people who were teenagers when this was going on and were into George, etc., at the time will naturally retain some kind of affection for [those artists] and that music because it meant so much to them.”

Rimmer acknowledges that New Pop might arguably be the last golden age of pop music. “I don’t know if it was the best one,” he says. “You have to compare it with the mid-’60s, really. It was certainly a completely lively era for that kind of stuff. I don’t know how you can directly compare [New Pop’s] impact with earlier or later generations. But certainly, there’s been nothing really like it since then.” As for what new readers should come away from Like Punk Never Happened, the author says: “I’d like them to take away a sense that there is much more to pop music than typically meets the eye, and that the much-maligned 1980s was way more complex and interesting than is commonly supposed.”

The new edition of Like Punk Never Happened: Culture Club and the New Pop by Dave Rimmer, published by Faber & Faber, is out now.

AUSTIN, Texas--(BUSINESS WIRE)--As the first multifamily management company to be recognized in the Public Relations and Marketing Excellence Awards, … END_OF_DOCUMENT_TOKEN_TO_BE_REPLACED

There have been whispers of cooling housing and rental prices in the San Francisco Bay Area, but that hasn't yet translated into practical, noticeable … END_OF_DOCUMENT_TOKEN_TO_BE_REPLACED

Cars pass in Independence Square at twilight in Kyiv, Ukraine, Monday, Oct. 31, 2022. Rolling ... [+] blackouts are increasing across Ukraine as the … END_OF_DOCUMENT_TOKEN_TO_BE_REPLACED