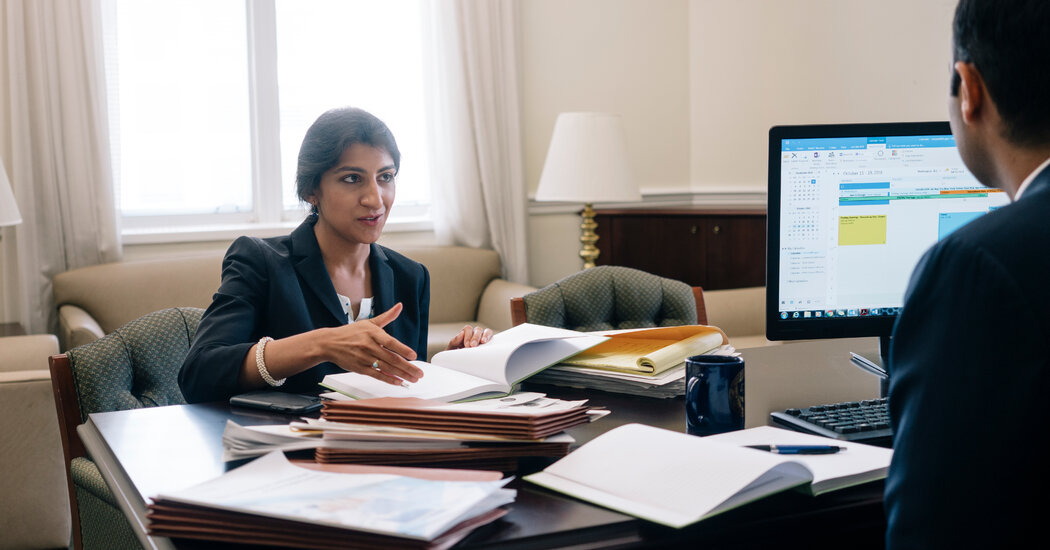 WASHINGTON — President Biden is expected to name Lina Khan, a law professor and leading critic of the tech industry’s power, to a seat on the Federal Trade Commission, a person with knowledge of the decision said on Tuesday.

An appointment of Ms. Khan, the author of a breakthrough Yale Law Journal paper in 2016 that accused Amazon of abusing its monopoly power, would be the latest sign that the Biden administration planned to take an aggressive posture toward tech giants like Amazon, Apple, Facebook and Google. Last week, the administration said Tim Wu, another top critic of the industry, would join the National Economic Council as a special assistant to the president for technology and competition policy.

Ms. Khan recently served as legal counsel for the House Judiciary’s antitrust subcommittee and was among aides who conducted a 19-month investigation into the tech giants’ monopoly power. The committee produced a report advocating major changes to antitrust laws. Before that, she served as an aide to a member of the Federal Trade Commission, Rohit Chopra, a champion of her ideas on antitrust policy.

Ms. Khan, an associate professor at Columbia Law School, would fill one of three Democratic seats on the five-member F.T.C. In December, the commission sued Facebook, accusing it of antitrust violations, and called for breaking up the company. The agency is also investing Amazon for antitrust violations.

Rumors of Ms. Khan’s appointment, which were reported earlier by Politico, immediately sparked strong reactions on Tuesday. Public Citizen, a left-leaning nonprofit public advocacy group, cheered the possibility. The organization and many progressive groups have denounced the F.T.C.’s history — particularly during the Obama administration — for lax enforcement of technology companies. They argue that the federal government’s permissive attitude toward mergers by the tech giants, including Facebook’s acquisition of Instagram in 2012 and WhatsApp in 2014, helped the Silicon Valley companies grow quickly and dominate their rivals.

“The F.T.C. has failed to take on corporate abuses of power including rampant antitrust violations, privacy intrusions, data security breaches and mergers, and Khan’s appointment as a commissioner at the agency hopefully will herald a new day,” Public Citizen said in a statement.

Senator Mike Lee of Utah, the ranking Republican on the Senate antitrust subcommittee, said Ms. Khan would be a bad fit for the job, however.

“Her views on antitrust enforcement are also wildly out of step with a prudent approach to the law,” Mr. Lee said in a statement. “Nominating Ms. Khan would signal that President Biden intends to put ideology and politics ahead of competent antitrust enforcement, which would be gravely disappointing at a time when it is absolutely critical that we have strong and effective leadership at the enforcement agencies.”

An affordable center-chimney Colonial in Glastonbury, CT, is the oldest property to hit the market this week on Realtor.com®.Offered at a steep … END_OF_DOCUMENT_TOKEN_TO_BE_REPLACED

Nissan was one of the early pioneers of the electric car. The Leaf has now sold over 600,000 units worldwide since its launch in 2011 and is still … END_OF_DOCUMENT_TOKEN_TO_BE_REPLACED

RUDNE, Ukraine — Yurii Brukhal, an electrician by trade, didn’t have a very dangerous role when he volunteered for Ukraine’s territorial defense … END_OF_DOCUMENT_TOKEN_TO_BE_REPLACED