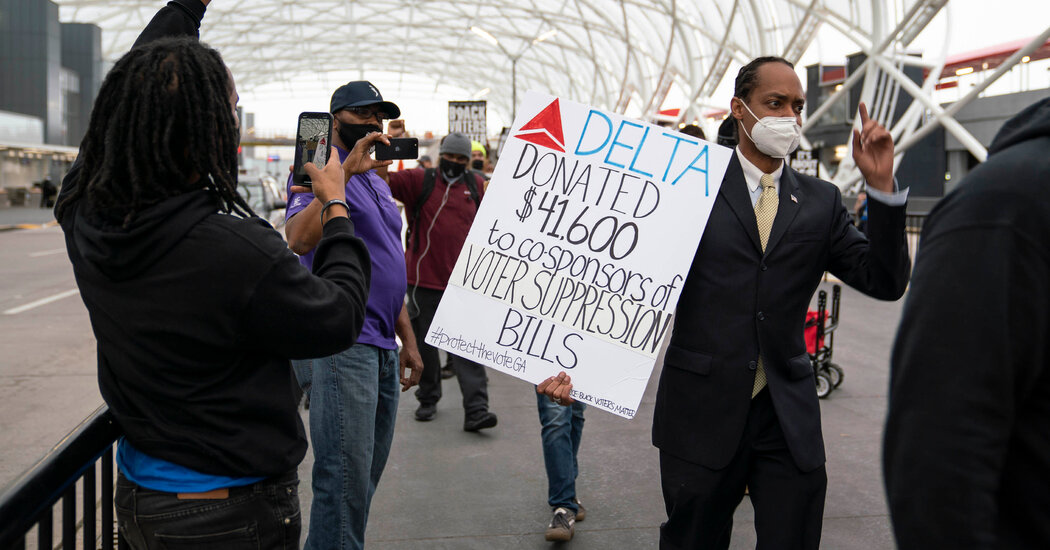 But in recent years, that compact has begun to fracture. Democrats, pushed by progressive activists, have shifted further to the left on a wide range of economic policy issues. Under Mr. Trump, Republicans became more hostile to free trade and immigration. After the Jan. 6 storming of the Capitol, some prominent companies and business groups announced they would cut off donations to Republicans who had joined an effort to challenge in Congress the results of Mr. Trump’s November loss to Mr. Biden, prompting some Republican lawmakers to swear off corporate donations.

Many top executives feel they have little choice. They are being pressured by customers and increasingly by young, progressive employees to speak out publicly on major issues. And in the era of social media, companies can get into just as much trouble by staying silent as by weighing in.

Polling data shows the squeeze. A Gallup poll conducted in January, in the days leading up to and immediately following the Capitol riot, found that just 31 percent of Republicans were satisfied with the “size and influence of major corporations.” That was down from 57 percent a year earlier.

And in a survey conducted last month for The New York Times by the online research platform SurveyMonkey, 81 percent of Republicans who knew enough to form an opinion said it was inappropriate for business leaders to speak out against the Georgia law. And 78 percent of Republicans said large corporations had too much influence over American life in general. (The survey was conducted before two coalitions of business leaders released letters calling for expanded voting rights in Texas.)

Elena Adams, a survey respondent in Northern California, said she began to feel that corporate America was shifting against her a few years ago, when Nike embraced Colin Kaepernick, the former San Francisco 49ers quarterback who drew widespread attention for kneeling during the national anthem to protest police violence.

“Basically I think we’re celebrating people who are not for the United States and pushing the agenda that we should be ashamed if we’re not people of color,” she said. “This whole narrative of the race thing, it’s reverse racism, is what’s happening.”

Ms. Adams, 66, said she had stopped flying Delta and buying Coca-Cola products. Since Major League Baseball relocated the All-Star Game from Atlanta over the Georgia voting law, she has quit following the Oakland Athletics. She has abandoned social media, believing that companies such as Facebook and Twitter are unfair to conservatives, and told the purchasing managers at the emergency response business where she is a partner to avoid buying from companies that espouse liberal positions, although she said it was too difficult to avoid companies like Amazon and Google altogether.

It’s a property that offers a unique open floor plan—plus a hot tub with a view.“It was a Methodist church located in a historic little area of St. … END_OF_DOCUMENT_TOKEN_TO_BE_REPLACED