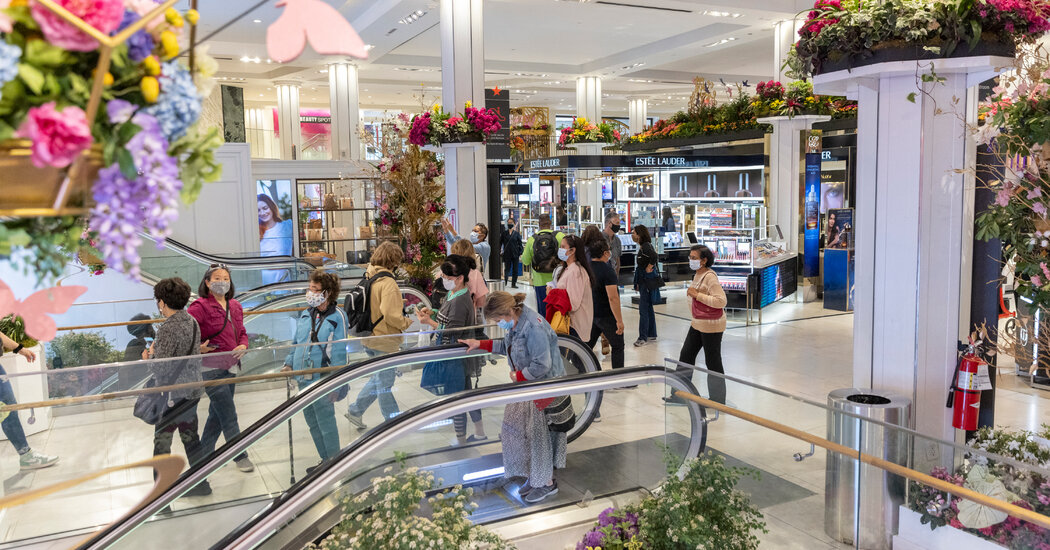 Macy’s said on Tuesday that its first-quarter sales jumped more than 50 percent from last year, when the start of the pandemic pulverized the retailer’s revenue, and it raised its forecast for sales and profit this year.

The company, which also owns Bloomingdale’s, reported $4.7 billion in sales for the three months that ended May 1, and a profit of $103 million. That compares with about $3 billion in sales and a net loss of $3.6 billion in the same period last year. Macy’s said it anticipated sales in the range of $21.7 billion to $22.2 billion this year, up from a previous forecast of somewhere between $19.8 billion and $20.8 billion.

Macy’s executives said on an earnings call that customers, buoyed by government stimulus were shopping again as the weather warmed up and vaccines have become more readily available. They are beginning to attend events after a year of isolation, and snapping up dresses for proms, casual get-togethers and weddings. Men’s tailored clothing is also seeing increases. Traffic is improving at Macy’s flagship stores, which lost visitors in the past year, though the company said it did not expect international tourism to recover until next year.

Department stores, which have already been under pressure in recent years, were battered by the pandemic as consumers postponed gatherings and avoided enclosed spaces. The news out of Macy’s was a positive for the retail sector, but the company’s first-quarter sales were still down about 15 percent from $5.5 billion in the same period of 2019. Macy’s made headlines recently after proposing the construction of a commercial office tower on top of its flagship Herald Square store in New York. The company said on the call on Tuesday that it expected the project would produce a “significant” amount of cash to support future plans.

The Seattle Seahawks are very much still in the running for Baker Mayfield. (Photo by Stacy ... [+] Revere/Getty Images) Getty Images The Seattle … END_OF_DOCUMENT_TOKEN_TO_BE_REPLACED

(CNN) — Kim Kyung-seop recalls going to cheap bars after class with his friends, where they binged on as much makgeolli as possible. "You know the … END_OF_DOCUMENT_TOKEN_TO_BE_REPLACED