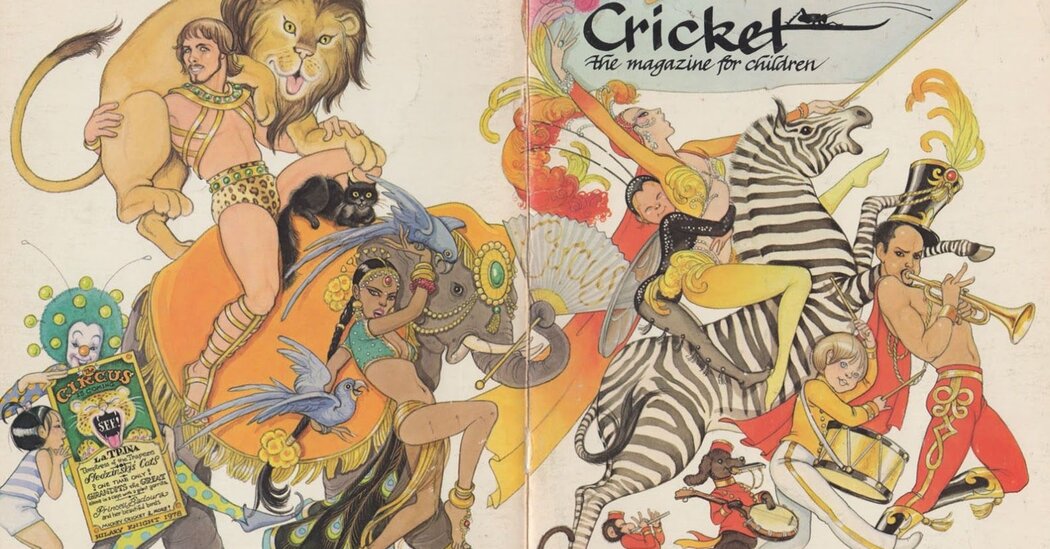 “They were aghast at what Dick and Jane had done to American reading,” John Grandits, Cricket’s first designer, said in a phone interview.

The Caruses tried a different approach a decade later with Cricket, starting with their advisory board, which they stacked with literary heavyweights, among them the children’s author Lloyd Alexander; Virginia Haviland, the founder of the Children’s Book Section at the Library of Congress; and the novelist Isaac Bashevis Singer. (A story by Mr. Singer, about a cricket who lived behind a stove, inspired the magazine’s name.) The board offered advice and helped the Caruses make inroads among the librarians and well-educated parents they would target as subscribers.

The couple also drew on the East Coast literary world to build their staff. Marcia Leonard, an editorial assistant and their first hire, was a recent graduate of the publishing course at Radcliffe College. They hired Clifton Fadiman, a former books editor at The New Yorker, to be Cricket’s senior editor. Mr. Fadiman’s regular radio and television appearances made him one of the few midcentury New York intellectuals to become a household name, and he used his extensive network of friends to stock the magazine’s pages: He got his friend Charles M. Schulz, the creator of “Peanuts,” to contribute to the first issue.

Alongside Mr. Schulz, the first few issues of Cricket featured new work by Mr. Singer and Nonny Hogrogian, a two-time winner of the Caldecott Medal for children’s literature, as well as reprints of work by T.S. Eliot and Astrid Lindgren, who created Pippi Longstocking.

Writers of both children’s and adult literature tried to get into the pages of Cricket; Ms. Carus once rejected a submission by the Pulitzer Prize-winning novelist William Saroyan. (He took it gracefully and sent in another story, which she accepted.)

Ms. Carus published several anthologies of Cricket stories, and in the early 1990s launched three more titles, aimed at different ages. She ran the magazine out of a book-filled warren of offices above a downtown bar, and later out of a repurposed clock factory. Around 2000 its headquarters, and its staff of about 100, moved to Chicago, though Ms. Carus, still the editor, decided to stay in LaSalle, with some of her top editors trekking back and forth every few days. The Caruses sold Cricket and its related titles in 2011; they are still being published.

Despite its fan base, Cricket never made much of a profit, a fact that did not seem to bother Ms. Carus.

“This is an idealistic undertaking,” she told The Baltimore Sun. “We’re not trying to make money. If we were, we’d be in comics and sex manuals.”

On this massive Michigan property, an enormous garage and a huge mansion battle it out in a clash of oversize titans.Located in Holland, MI, and … END_OF_DOCUMENT_TOKEN_TO_BE_REPLACED