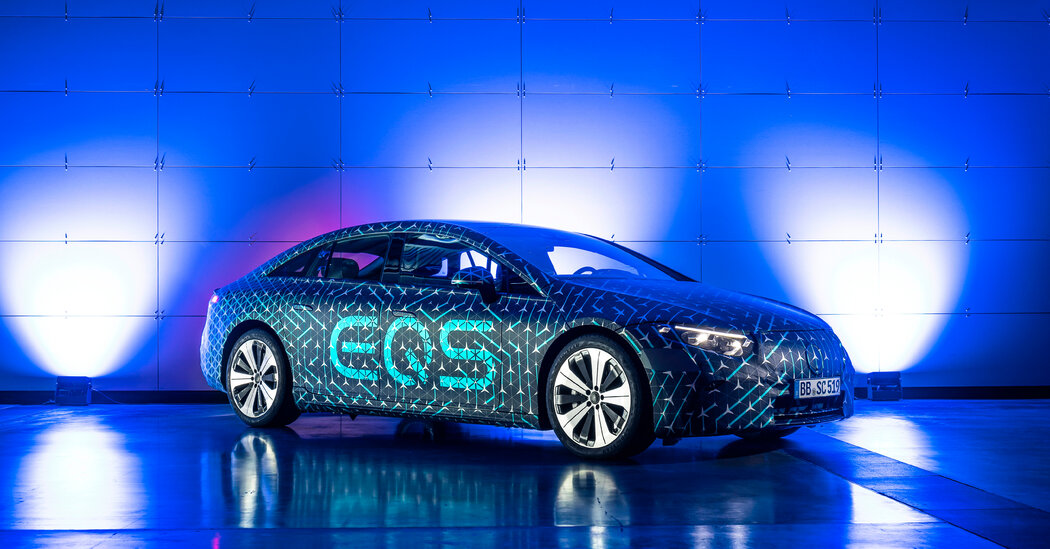 Mercedes-Benz unveiled an electric counterpart to its top-of-the-line S-Class sedan on Thursday, the latest in a series of moves by German automakers to defend their dominance of the high end of the car market against Tesla.

The EQS, which will be available in the United States in August, is the first of four electric vehicles Mercedes will introduce this year, including two S.U.V.s that will be made at the company’s factory in Alabama and a lower-priced sedan. Mercedes did not announce a price for the EQS, but it is unlikely to be lower than the S-Class, which starts at $94,000 in the United States.

The cars could be decisive for Daimler, the parent company of Mercedes, as it tries to adapt to new technology.

“It is important to us,” Ola Källenius, the chief executive of Daimler, said of the EQS during an interview. “In a way it is kind of day one of a new era.”

The EQS owes its stamina to advances in battery technology and an exceptionally aerodynamic design, Mr. Källenius said. Some analysts question whether Mercedes can sell enough electric vehicles to justify the cost of development, but Mr. Källenius said, “We will make money with the EQS from the word ‘go.’”

The EQS is the latest attempt by German carmakers to show that they can apply their expertise in engineering and production efficiency to battery-powered cars. Vehicles are Germany’s biggest export, so the carmakers’ success or failure will have a significant impact on the country’s prosperity.

On Wednesday, Audi, the luxury unit of Volkswagen, unveiled the Q4 E-Tron, an electric SUV. The Q4 shares many components with the Volkswagen ID.4, an electric SUV that the company began delivering to customers in the United States in March. Though priced to compete with internal combustion models, neither vehicle offers as much range as comparable Tesla cars.

In the S-Class tradition, the EQS offers over-the-top luxury features like software that can recognize when a driver might be feeling fatigued and can offer to turn on the massage function embedded in the seat.

AUSTIN, Texas--(BUSINESS WIRE)--As the first multifamily management company to be recognized in the Public Relations and Marketing Excellence Awards, … END_OF_DOCUMENT_TOKEN_TO_BE_REPLACED

There have been whispers of cooling housing and rental prices in the San Francisco Bay Area, but that hasn't yet translated into practical, noticeable … END_OF_DOCUMENT_TOKEN_TO_BE_REPLACED

Cars pass in Independence Square at twilight in Kyiv, Ukraine, Monday, Oct. 31, 2022. Rolling ... [+] blackouts are increasing across Ukraine as the … END_OF_DOCUMENT_TOKEN_TO_BE_REPLACED