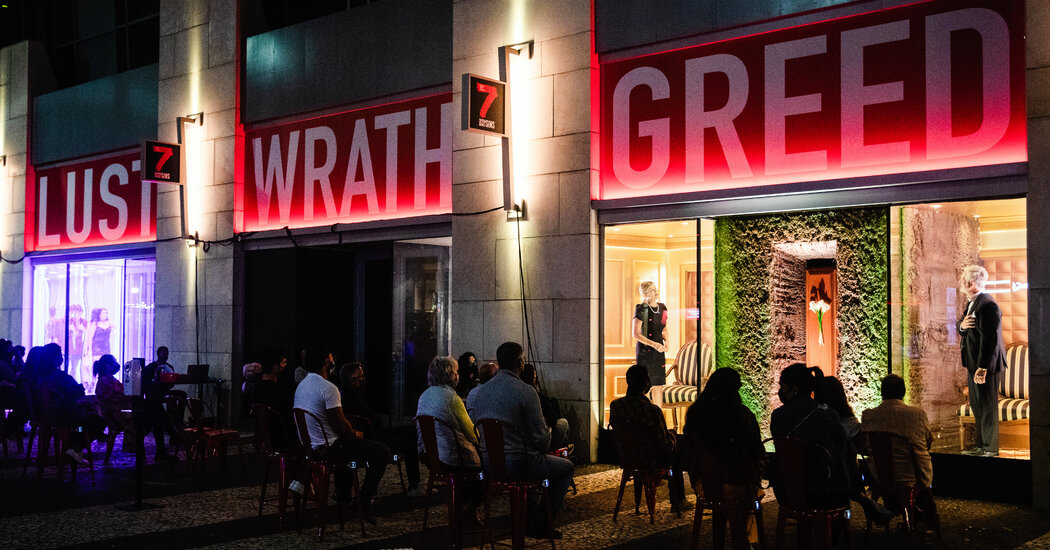 After enjoying a successful run in Miami Beach from late November through January, “The Seven Deadly Sins,” an outdoor theatrical anthology series that explores humanity’s basest impulses, will come to New York. Performances are scheduled to begin on June 23 and will take place in storefront windows in Manhattan’s Meatpacking District.

“I think it was important for us to do it in this moment of transition,” said Moisés Kaufman, the founder and artistic director of Tectonic Theater Project, which is producing the show with Madison Wells Live in association with Miami New Drama. “We wanted to be able to create something while the pandemic is still with us because it feels more like an act of defiance.”

“We really wanted the event to not be a revival of an existing play,” Kaufman said in an interview on Wednesday. After having been through a pandemic, “the idea that new art can be born on the streets of Manhattan is something that excites us.”

Storefront performances have cropped up in New York periodically since the pandemic began, but none so far have matched the scale or complexity of “The Seven Deadly Sins.” In March, Gov. Andrew M. Cuomo announced that live indoor and outdoor shows could resume in the state at limited capacity beginning April 2, paving the way for more ambitious projects to take root in the city this spring and summer.

Tickets go on sale May 14. Casting information will be released soon.

AUSTIN, Texas--(BUSINESS WIRE)--As the first multifamily management company to be recognized in the Public Relations and Marketing Excellence Awards, … END_OF_DOCUMENT_TOKEN_TO_BE_REPLACED

There have been whispers of cooling housing and rental prices in the San Francisco Bay Area, but that hasn't yet translated into practical, noticeable … END_OF_DOCUMENT_TOKEN_TO_BE_REPLACED

Cars pass in Independence Square at twilight in Kyiv, Ukraine, Monday, Oct. 31, 2022. Rolling ... [+] blackouts are increasing across Ukraine as the … END_OF_DOCUMENT_TOKEN_TO_BE_REPLACED