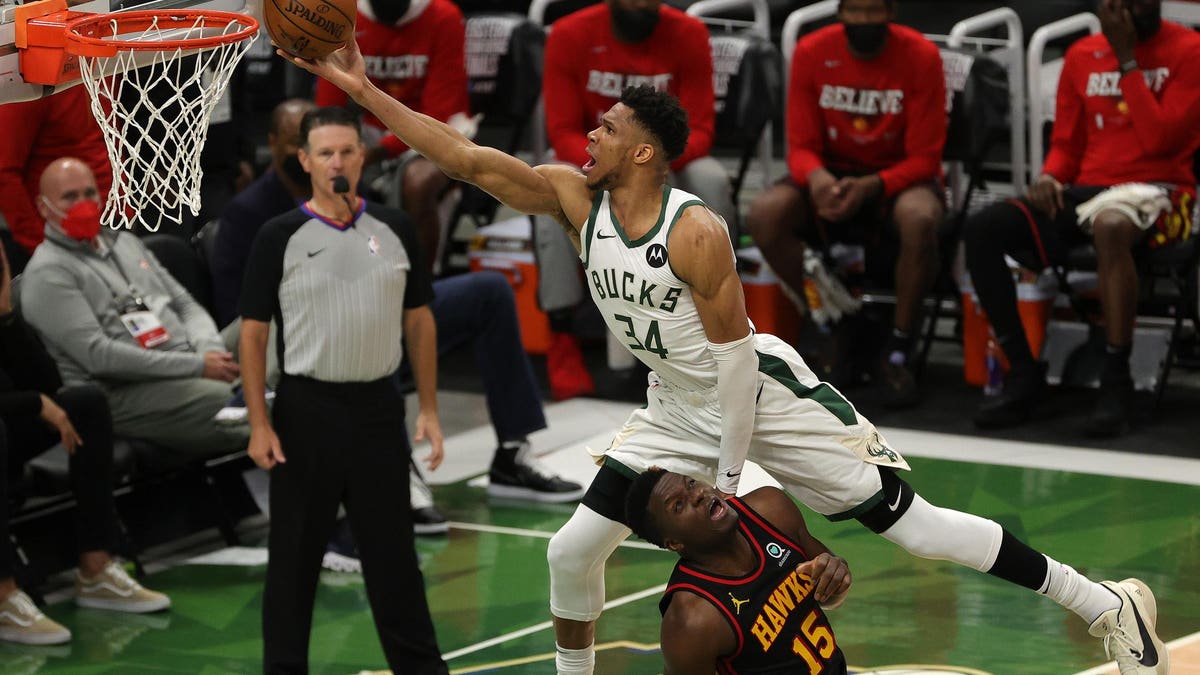 If Giannis Antetokounmpo is ever going to win an NBA championship as the main guy on the Milwaukee Bucks, now is the time.

Following the Bucks’ impressive 125-91 victory over the Atlanta Hawks in Game 2 on Friday night — a game in which they led by as many as 40 points — Milwaukee is now tied with Atlanta at one-apiece in their Eastern Conference Finals series.

The two-time MVP displayed his usual dominance, scoring 25 points in just 29 minutes of playing time. He’s now the only player — alongside Shaquille O’Neal — to score 50 points in the paint in the first two games of a playoff series.

The Bucks responded about as well as any team could after a humbling loss to the lower-seeded Hawks on their own home court in Game 1. It was the second-largest victory — 34 points — following a Game 1 loss in conference finals history.

It’s clear judging from the first two games of this series that Giannis can have his way with the Hawks at will. John Collins and Clint Capela aren’t going to slow down Antetokounmpo — who posted at least 30 points and 10 rebounds in six straight games prior to Game 2.

The only reason he didn’t?

Because the Bucks already led by at at least 40 points early on in the fourth quarter.

When you look at the postseason field, Milwaukee has their best chance to win a championship now more than ever. They eliminated one of their top competitors in the East in the Brooklyn Nets — aided by injuries to James Harden and Kyrie Irving — and don’t have to match up against the Philadelphia 76ers after they were eliminated by the Hawks.

On the Western Conference side of things, the Los Angeles Lakers were eliminated long ago and the top-seeded Utah Jazz — with their top-ranking defensive unit and former Defensive Player of the Year Rudy Gobert — are out of the playoff picture.

As far as the remaining teams are concerned, you have a hobbled Los Angeles Clippers squad that may not even have Kawhi Leonard back in the picture at all this postseason. And while the Phoenix Suns are certainly a dangerous team with Devin Booker, Chris Paul and DeAndre Ayton, they’re an extremely inexperienced one outside of the 36-year-old Paul.

The Bucks on the other hand, have been through postseason heartbreak. In other words, they have all of the experience and the look of a team that’s ready to win a championship.

We’re all aware of Antetokounmpo’s struggles to win his first NBA title. It’s no secret that he failed to lead the Bucks to even an NBA Finals appearance after clinching the conference’s top seed in each of the past two years.

In 2019, the Bucks fell short against the Leonard-led Raptors. In 2020, they were upset in the semifinals by a streaky Miami Heat squad that ended up making a surprise appearance in the Finals.

It’s also no secret that Antetokounmpo wants to win a championship as the main guy on the Bucks — not a star that’s jumping from team to team in an effort to take the easy way out in winning a championship.

“You don’t have to have a lot of (stars),” Antetokounmpo told Bleacher Report’s Howard Beck back in 2018.

It’s also the reason Antetokounmpo agreed to the richest contract in NBA history earlier this year, when he agreed to a five-year supermax extension worth $228.2 million just prior to the start of the 2020-21 season.

In other words, barring a demanded trade, Antetokounmpo is not leaving Milwaukee.

And considering teams like the Nets, Lakers, Suns, Sixers, Clippers and yes, the Hawks, will be even better next season, the time is now for Giannis and the Bucks to win a championship.

Although he’ll only be 27 years old this year, time, injuries and the rest of the league evolving have a way of limiting a player’s championship window.

Considering all of those circumstances, Giannis and the Bucks’ best chance at winning a championship is now.

If they don’t win it this year, they may never win a championship during the Antetokounmpo era — as crazy as that may sound for a superstar who is just 26 years old.

J.T. Brown #23 of the Tampa Bay Lightning skates into goalie Henrik Lundqvist #30 of the New York Rangers during the second period in Game Six of the … END_OF_DOCUMENT_TOKEN_TO_BE_REPLACED

The Mississippi River town of Ste. Genevieve, MO, might be the ideal spot for a buyer in search of a refreshing idea.This mixed-use structure on the … END_OF_DOCUMENT_TOKEN_TO_BE_REPLACED