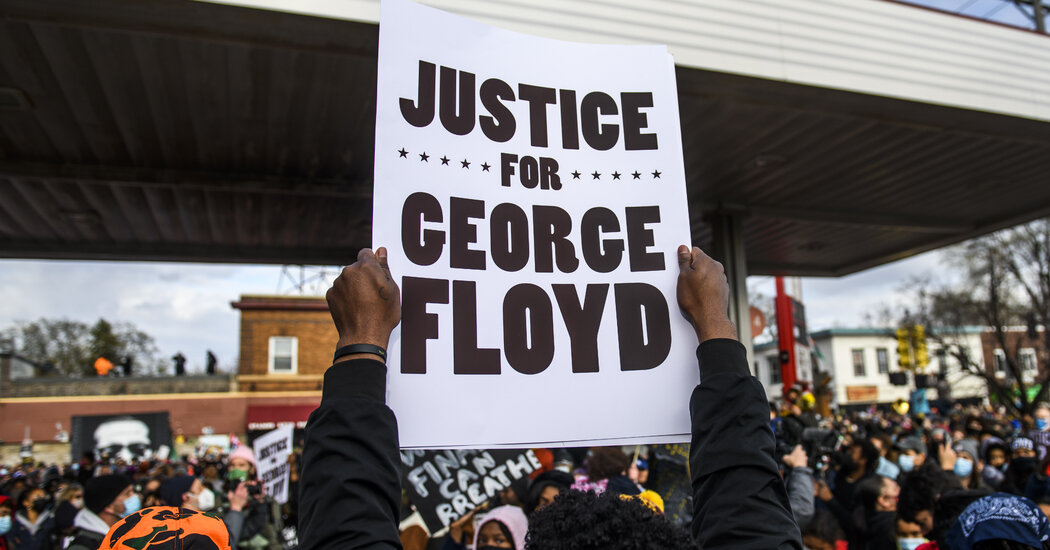 Andrew here. Yesterday’s guilty verdict against George Floyd’s murderer, a former Minneapolis police officer, was a symbol of something profound: a demonstrable shift in the way this country, increasingly supported by business, has strived for civil rights.

As we ponder the meaning of this decision, it is worth recalling a moment in 1965, in the middle of that era’s civil rights movement.

A Wall Street bond firm, C.F. Securities, told Alabama that it would “no longer buy or sell bonds issued by the state or any of its political subdivisions.” Gov. George C. Wallace, who objected to desegregation, had said the state shouldn’t pay for the National Guard to protect Martin Luther King Jr. and protesters in the Selma-to-Montgomery march.

The investment firm’s executive vice president, Donald E. Barnes, wrote to the governor that his failure “to protect the citizens of Alabama in their exercise of constitutional rights” amounted to “discouragements to Alabama’s economic future.” He insisted that the move was based on economic risk, but the letter made clear it was about more than that.

paid time off on Juneteenth; the N.B.A. emblazoned the words “Black Lives Matter” on courts; Netflix steered its cash into local banks that serve Black communities; Wall Street banks announced programs worth billions to support Black communities; and just last week, in perhaps the greatest demonstration of the new responsibility business is feeling, 700 companies and executives signed a letter opposing laws that make it harder for people to vote.

“The murder of George Floyd last Memorial Day felt like a turning point for our country. The solidarity and stand against racism since then have been unlike anything I’ve experienced,” Brian Cornell, the C.E.O. of Target, wrote in a note to employees of the Minneapolis-based retailer yesterday. “Like outraged people everywhere, I had an overwhelming hope that today’s verdict would provide real accountability. Anything short of that would have shaken my faith that our country had truly turned a corner.”

You know what? Justice is good for business.

The European Super League has collapsed. Plans to create a closed competition of top soccer clubs fell apart yesterday when six English teams withdrew, bowing to outrage from fans and threats by lawmakers. Shortly after, an official at the Super League said the project had been suspended, ending an effort to upend soccer’s multibillion-dollar economics.

outweigh a small risk of blood clots, but wants a warning added. U.S. regulators will decide whether to end a pause on the vaccine in the coming days.

Goldman Sachs releases worker diversity data. The Wall Street bank disclosed for the first time how many of its senior U.S. executives are Black: 49 out of more than 1,500. Banks agreed last year to publish more information about their work forces; Morgan Stanley has an even smaller share of Black executives than Goldman.

Apple’s new products raise competition concerns. The tech giant unveiled new iPads and iMacs, and a revamped podcast app. But its new AirTags, which attach to items to help find them, was criticized by the C.E.O. of Tile, which makes a similar product. Apple also said it would roll out new iOS privacy features — criticized by Facebook and other app makers — next week.

Lina Khan’s nomination to the Federal Trade Commission is one of the clearest signs of progressive influence in the Biden administration. A Columbia University scholar who worked on a major congressional report about Big Tech and antitrust last year, Ms. Khan is a star in the constellation of competition law experts known as “antimonopolists.” Her confirmation hearing with the Senate Commerce Committee is today.

power of internet giants, which could win her some conservative support. Having a “strong” perspective probably isn’t an obstacle to confirmation, Mr. Hoffman said.

Big Tech will be a likely focus at the hearing. But this would be a “disservice” to Ms. Khan, according to Mr. Hoffman. “At the F.T.C., a lot of the agenda is reactive,” he said. Companies file merger paperwork and regulators respond, whatever the industry. Ms. Khan has a broad perspective on competition law, Mr. Hoffman said, and today would be “a fair time” to ask what “objective standards” she’d apply.

“You have to have some morals.”

— Ari Emanuel, the outspoken C.E.O. of the entertainment conglomerate Endeavor, speaking in a New Yorker profile about returning an investment from Saudi Arabia after the killing of Jamal Khashoggi. Separately, Endeavor disclosed yesterday that it hopes to be valued at more than $10 billion in an I.P.O.

These ‘Roaring Twenties’ have railroad battles, too

Canadian National Railway yesterday offered to buy Kansas City Southern for $33.7 billion, topping a $29 billion bid last month by its rival Canadian Pacific. They’re jockeying over the chance to create the first railroad connecting major ports from Canada to Mexico. The bidding war reflects bullishness about an industry poised for growth if a post-pandemic boom ushers in this generation’s “Roaring Twenties.”

antitrust concerns made the counterbid “illusory and inferior.” Kansas City Southern said it would evaluate the new bid in accordance with its agreement with its original suitor.

mixed reception from freight shippers, who suffered in the last round of consolidation. And we haven’t yet heard from Senator Amy Klobuchar, who heads the antitrust subcommittee and represents key industrial interests in Minnesota.

Giving Coinbase a run for its (digital) money

The public listing of Coinbase, the largest crypto exchange in the U.S., generated a wave of excitement that competitors aim to ride. Among them is Binance.US, the third-ranked domestic crypto exchange, which yesterday named Brian Brooks — formerly Coinbase’s chief counsel and most recently acting U.S. comptroller of the currency — as C.E.O., beginning in May. “There’s a lot of buzz about my former employer, which is well-deserved,” Mr. Brooks told DealBook about Coinbase. “But it’s in everybody’s best interest if there’s more competition.”

Mr. Brooks’ first task is building trust with regulators. He says “managing reputation” is his biggest concern. Binance has shifted its operations throughout Asia since it was founded in 2017, and some say it played fast and loose with rules. The C.F.T.C. was reportedly investigating the company for allowing U.S.-based customers to trade crypto derivatives, which is banned (the agency declined to comment). Mr. Brooks insists he did “a lot” of due diligence on his new employer and dismisses “loose talk” about the exchange flouting regulations.

Binance.US sees potential to lead in undeveloped areas of the American crypto landscape, like derivatives and lending. Mr. Brooks said the company can learn from competitors like Coinbase and Kraken — and challenge them. That is, if he can convince regulators to bless its efforts to bring crypto into the financial mainstream, a preoccupation of players across the industry.

JPMorgan wants to end banker burnout, for real this time

Yesterday, JPMorgan Chase’s co-heads of investment banking, Jim Casey and Viswas Raghavan, announced policies aimed at improving working conditions amid record deal volume and banker burnout. The company has attempted similar things before. DealBook spoke with Mr. Casey about the latest plan — and whether this one will stick.

JPMorgan has recently hired 65 analysts and 22 associates, and plans to add another 100 junior bankers and support staff, Mr. Casey said. It’s targeting bankers at rival firms, as well as lawyers and accountants interested in a career switch.

“It’s not a money problem,” Mr. Casey said, so there won’t be one-time checks or free Pelotons after a rush. Junior bankers will get their share of the record $3 billion in fees JPMorgan earned in the first quarter.

Some things won’t change. Because banking is a client-service job, managers sometimes have limited control over workloads and hours. “You might do 100 deals a year, but that client only does one deal every three years,” Mr. Casey said.

How the bank will measure success: “Ask me what our turnover ratio has gone to and I will tell you,” Mr. Casey said. The goal, he said, is “lower.”

AUSTIN, Texas--(BUSINESS WIRE)--As the first multifamily management company to be recognized in the Public Relations and Marketing Excellence Awards, … END_OF_DOCUMENT_TOKEN_TO_BE_REPLACED

There have been whispers of cooling housing and rental prices in the San Francisco Bay Area, but that hasn't yet translated into practical, noticeable … END_OF_DOCUMENT_TOKEN_TO_BE_REPLACED

Cars pass in Independence Square at twilight in Kyiv, Ukraine, Monday, Oct. 31, 2022. Rolling ... [+] blackouts are increasing across Ukraine as the … END_OF_DOCUMENT_TOKEN_TO_BE_REPLACED