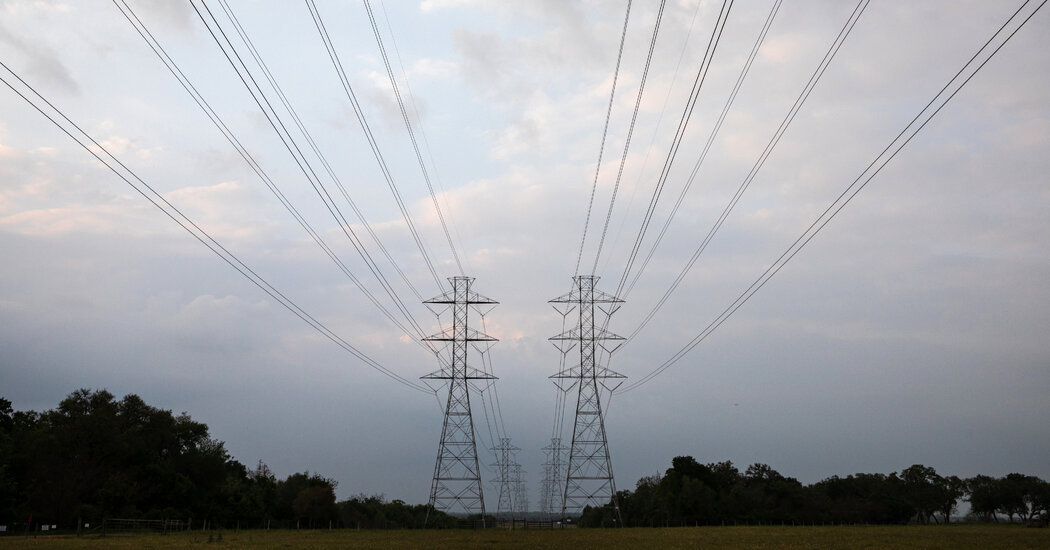 The nation is facing once in a generation choices about how energy ought to be delivered to homes, businesses and electric cars — decisions that could shape the course of climate change and determine how the United States copes with wildfires, heat waves and other extreme weather linked to global warming.

On one side, large electric utilities and President Biden want to build thousands of miles of power lines to move electricity created by distant wind turbines and solar farms to cities and suburbs. On the other, some environmental organizations and community groups are pushing for greater investment in rooftop solar panels, batteries and local wind turbines.

There is an intense policy struggle taking place in Washington and state capitals about the choices that lawmakers, energy businesses and individuals make in the next few years, which could lock in an energy system that lasts for decades. The divide between those who want more power lines and those calling for a more decentralized energy system has split the renewable energy industry and the environmental movement. And it has created partnerships of convenience between fossil fuel companies and local groups fighting power lines.

At issue is how quickly the country can move to cleaner energy and how much electricity rates will increase.

senators from both parties agreed to in June. That deal includes the creation of a Grid Development Authority to speed up approvals for transmission lines.

Most energy experts agree that the United States must improve its aging electric grids, especially after millions of Texans spent days freezing this winter when the state’s electricity system faltered.

“The choices we make today will set us on a path that, if history is a barometer, could last for 50 to 100 years,” said Amy Myers Jaffe, managing director of the Climate Policy Lab at Tufts University. “At stake is literally the health and economic well-being of every American.”

The option supported by Mr. Biden and some large energy companies would replace coal and natural gas power plants with large wind and solar farms hundreds of miles from cities, requiring lots of new power lines. Such integration would strengthen the control that the utility industry and Wall Street have over the grid.

Some environmentalists argue that greater use of rooftop solar and batteries is becoming more essential because of climate change.

After its gear ignited several large wildfires, Pacific Gas & Electric began shutting off power on hot and windy days to prevent fires. The company emerged from bankruptcy last year after amassing $30 billion in liabilities for wildfires caused by its equipment, including transmission lines.

Elizabeth Ellenburg, an 87-year-old cancer survivor in Napa, Calif., bought solar panels and a battery from Sunrun in 2019 to keep her refrigerator, oxygen equipment and appliances running during PG&E’s power shut-offs, a plan that she said has worked well.

“Usually, when PG&E goes out it’s not 24 hours — it’s days,” said Ms. Ellenburg, a retired nurse. “I need to have the ability to use medical equipment. To live in my own home, I needed power other than the power company.”

working to improve its equipment. “Our focus is to make both our distribution and transmission system more resilient and fireproof,” said Sumeet Singh, PG&E’s chief risk officer.

But spending on fire prevention by California utilities has raised electricity rates, and consumer groups say building more power lines will drive them even higher.

Average residential electricity rates nationally have increased by about 14 percent over the last decade even though average household energy use rose just over 1 percent.

2019 report by the National Renewable Energy Laboratory, a research arm of the Energy Department, found that greater use of rooftop solar can reduce the need for new transmission lines, displace expensive power plants and save the energy that is lost when electricity is moved long distances. The study also found that rooftop systems can put pressure on utilities to improve or expand neighborhood wires and equipment.

Texas was paralyzed for more than four days by a deep freeze that shut down power plants and disabled natural gas pipelines. People used cars and grills and even burned furniture to keep warm; at least 150 died.

One reason for the failure was that the state has kept the grid managed by the Electric Reliability Council of Texas largely disconnected from the rest of the country to avoid federal oversight. That prevented the state from importing power and makes Texas a case for the interconnected power system that Mr. Biden wants.

Consider Marfa, an artsy town in the Chihuahuan Desert. Residents struggled to stay warm as the ground was blanketed with snow and freezing rain. Yet 75 miles to the west, the lights were on in Van Horn, Texas. That town is served by El Paso Electric, a utility attached to the Western Electricity Coordinating Council, a grid that ties together 14 states, two Canadian provinces and a Mexican state.

$1.4 million, compared with about $1 million to Donald J. Trump, according to the Center for Responsive Politics.

In Washington, developers of large solar and wind projects are pushing for a more connected grid while utilities want more federal funding for new transmission lines. Advocates for rooftop solar panels and batteries are lobbying Congress for more federal incentives.

Separately, there are pitched battles going on in state capitals over how much utilities must pay homeowners for the electricity generated by rooftop solar panels. Utilities in California, Florida and elsewhere want lawmakers to reduce those rates. Homeowners with solar panels and renewable energy groups are fighting those efforts.

Despite Mr. Biden’s support, the utility industry could struggle to add power lines.

Many Americans resist transmission lines for aesthetic and environmental reasons. Powerful economic interests are also at play. In Maine, for instance, a campaign is underway to stop a 145-mile line that will bring hydroelectric power from Quebec to Massachusetts.

New England has phased out coal but still uses natural gas. Lawmakers are hoping to change that with the help of the $1 billion line, called the New England Clean Energy Connect.

This spring, workmen cleared trees and installed steel poles in the forests of western Maine. First proposed a decade ago, the project was supposed to cut through New Hampshire until the state rejected it. Federal and state regulators have signed off on the Maine route, which is sponsored by Central Maine Power and HydroQuebec.

But the project is mired in lawsuits, and Maine residents could block it through a November ballot measure.

set a record in May, and some scientists believe recent heat waves were made worse by climate change.

“Transmission projects take upward of 10 years from conception to completion,” said Douglas D. Giuffre, a power expert at IHS Markit. “So if we’re looking at decarbonization of the power sector by 2035, then this all needs to happen very rapidly.”

SAN FRANCISCO — Cleve Jones has lived in the Castro neighborhood for nearly 50 years, almost from the day he graduated from high school in Phoenix and … END_OF_DOCUMENT_TOKEN_TO_BE_REPLACED

A home inspection can spare you from unpleasant surprises after you buy. After crunching the numbers, searching your favorite neighborhoods, and … END_OF_DOCUMENT_TOKEN_TO_BE_REPLACED