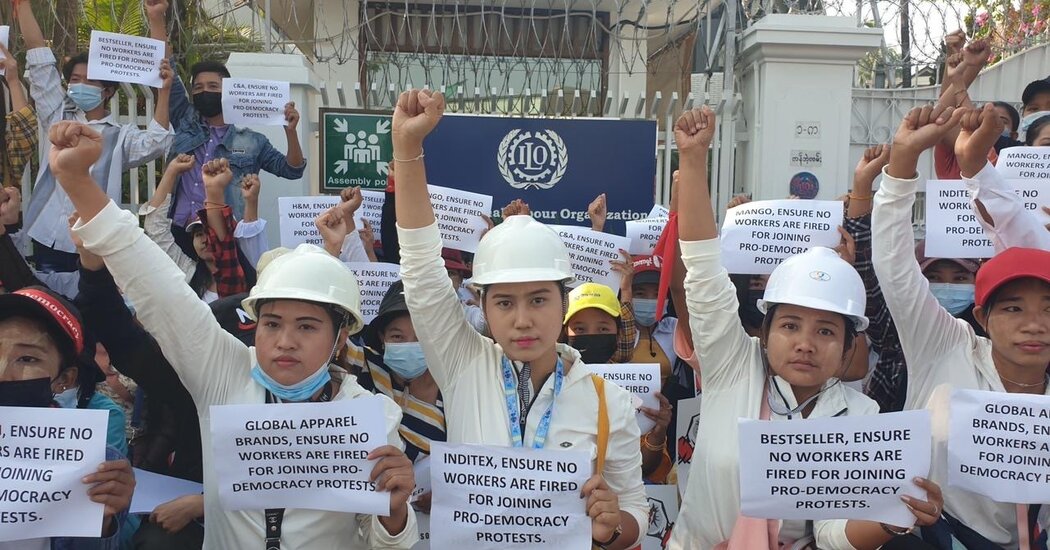 He added that H & M was “extremely concerned about the situation in the country.”

The company’s action followed a statement last month from H & M, Inditex, Bestseller and Primark that stressed they were paying attention to events and affirmed their commitment to democratic standards. The brands are all signatories of ACT, or Action, Collaboration, Transformation, an agreement brokered between brands and the global trade union IndustriALL. It is meant to ensure that workers using collective bargaining and freedom of association can negotiate living wages.

This week, alongside public servants, medical and bank workers as well as teachers, Ms. Moe Sandar Myint and other union leaders continued calls for an extended nationwide strike, one that would paralyze the Myanmar economy and send a message to the generals who had taken over the country at gunpoint.

Ma Tin Tin Wei, 26, makes men’s jackets for the Italian brand OVS and other labels. A garment worker for five years and union leader for four, she organized a strike on her factory floor after the coup in which workers wore white blouses and red ribbons and sang famous historical songs and anthems (a move allowed by factory management). She worked just six days in February, spending most of her time sending letters to embassies, thinking about social media campaigns and preparing for the strikes.

“If there were rights violations before in factories, then under a military regime there is no question that things will be even worse for garment workers with low-wage jobs,” she said. “This is a fight I must take on. We can’t accept this, even if it means risking arrest or death. It’s for me, my family, my union colleagues and all the people of Myanmar.”

A recent study suggests the number of people making less than $1.90 a day in Myanmar has more than tripled, to 63 percent of the population, since the pandemic began. Now, after a year of Covid-19-induced shutdowns, layoffs, pay cuts and union crackdowns, tens of thousands of garment workers have been spurred into civil disobedience in recent weeks, as the coup threatens both their freedom and the industry.

Factory owners, however, are torn between allowing workers to attend rallies and facing the wrath of the police for letting them. Many also fear a possible reintroduction of sanctions, and that the growing instability will push valuable international brands away. But several of the garment union leaders said they were prepared to make whatever sacrifices were necessary — including mass layoffs as a result of potential sanctions — to defeat the military dictatorship.

GREENVILLE, N.C.--(BUSINESS WIRE)--Employers aiming to win the war on talent have a new “A” team to tap into: college and professional athletes. … END_OF_DOCUMENT_TOKEN_TO_BE_REPLACED

Mortgage rates are likely to rise in July, extending a seven-month streak. High inflation, and the Federal Reserve's efforts to control it, have … END_OF_DOCUMENT_TOKEN_TO_BE_REPLACED