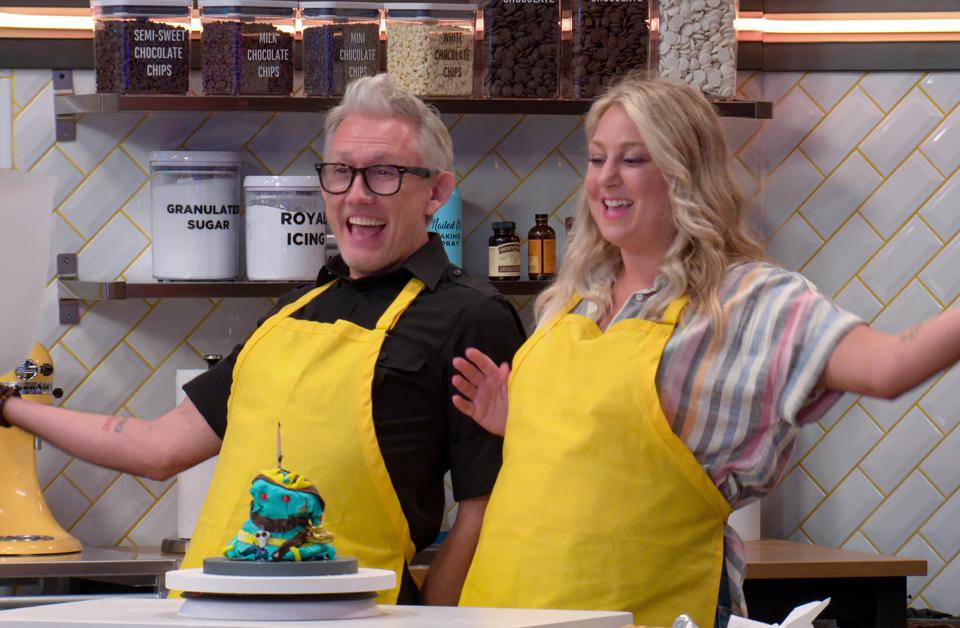 Thank the pandemic for stirring up a greater popularity for cooking shows that feature amateur bakers making monstrosities rather than cutthroat cooks trying to become the next “top chef.”

That’s the premise of Netflix’s Nailed It!, a show inspired by the viral phenomenon of at home bakers posting their hilarious baking fails on social media. With people spending so much more time creating concoctions in their kitchens during COVID-19, the reality half hour has only become more relatable.

Since its U.S. premiere in 2018, the Nailed It! Universe has grown to include an annual Nailed It! Holiday special and international versions of the show in France, Germany, Mexico and Spain. The show has been nominated for three Primetime Emmy Awards – twice for Outstanding Competition Program and once for Outstanding Host for a Reality or Competition Program. The latter made the show’s host Nicole Byer the first Black woman to be nominated for the award.

Now, the series fifth season, dubbed Nailed It! Double Trouble, which premiered March 26, is the show’s first spin-off that features contestants competing in pairs. Byer once again hosts while French pastry chef Jacques Torres is featured along with a gaggle of guest judges.

“We are always looking to evolve shows to keep the content fresh and engaging while maintaining the humor and authenticity audiences have come to expect,” said co-creator Jo Sharon, who is also co-CEO of Magical Elves, the production company behind the series and other reality shows including Top Chef, Project Runway and Cold Justice.

Noting how the new teams format has changed the dynamic of this season, her fellow co-creator and co-CEO of Magical Elves Casey Kriley added, “It was so fun for us to see the ways that the different teams approached the challenges and how it brought out the interpersonal dynamics of the duos.”

While some might consider it a silly and light-hearted take on the highly successful Top Chef, the series and its over-the-top ridiculous seems readily accepted by viewers who plainly see it as a baking competition show for people who should never be in such a contest.

Kriley said the team behind the series starts by always looking at what’s trending and happening in the world and by pushing themselves into new places. Internally, potential challenges are set up for bakers who have little to no skill. Some cakes don’t move forward simply because the failures aren’t funny enough.

“We try to find people from all walks of life who have a passion for baking, don’t take themselves too seriously, and who we’d enjoy watching go through this process,” she explained.

When it comes to the executive producers’ favorite episodes of Season 6, Sharon named The Burbank State Fair because it was the first time the show had featured contestants in drag and Can’t Believe It’s Cake with guest judge A$AP Ferg. But she agreed with Kriley that each episode is special because of how the guest judges react to contestants.

“Every episode has a unique feel and is truly so fun because of their authenticity,” said Kriley.

Said Sharon, “Nailed It! started out as this silly show that had wings bigger than we anticipated, and it’s been amazing to see its journey and its resonance.”

“Our hope is that the show continues to evolve in fun ways, leading to even more fun epic fails,” added Sharon.

HANOVER, N.H. — Sirey Zhang, a first-year student at Dartmouth’s Geisel School of Medicine, was on spring break in March when he received an email … END_OF_DOCUMENT_TOKEN_TO_BE_REPLACED

VLACHOVICE-VRBETICE, Czech Republic — For nearly a century, local residents have wondered at the strange comings and goings at a sealed-off camp … END_OF_DOCUMENT_TOKEN_TO_BE_REPLACED

That’s changing. The Biden administration and its allies are pushing the notion that caring for children — and the sick and the elderly — is just as … END_OF_DOCUMENT_TOKEN_TO_BE_REPLACED