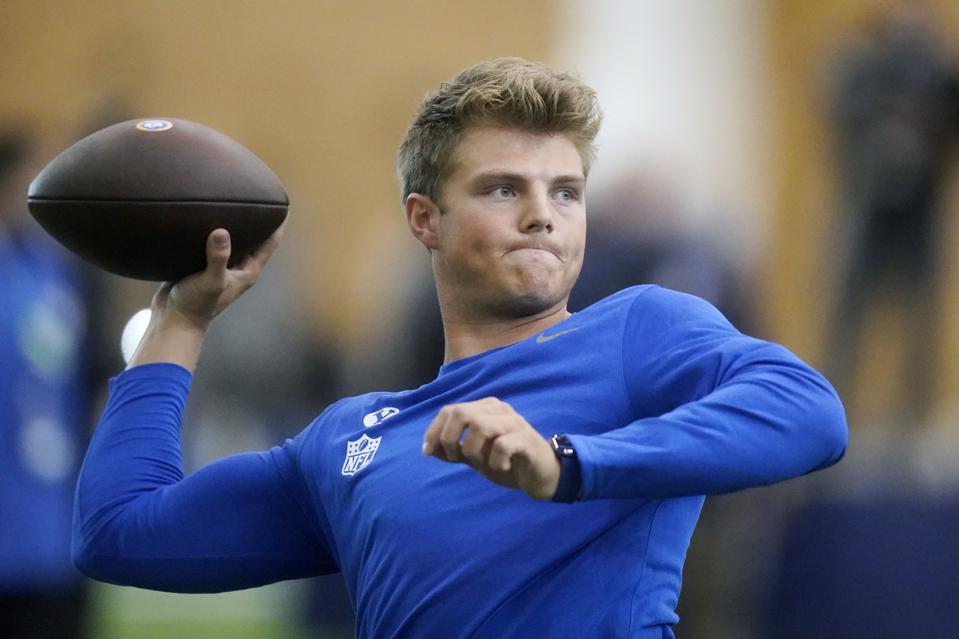 The circumstances were familiar, much too familiar for the New York Jets. But they hope that by selecting Zach Wilson with the second pick in the 2021 NFL Draft, they won’t be in this situation again for a long time.

The Jets made Wilson, the BYU quarterback prospect, their first-round pick in the 2021 NFL Draft on Thursday night only three years after taking USC quarterback Sam Darnold with the third overall selection. It marked the first time in the common NFL draft era (since 1967) that a team has picked a quarterback twice in the first three selections in a four-year, according to ESPN Stats & Information.

Of course, the Jets are picking a signalcaller so high because Darnold didn’t work out. He was the lowest-rated NFL quarterback for the three-year period from 2018-20. Yes, the Jets didn’t do the best job of surrounding him with great talent and coaching, but Darnold himself struggled, too. Thus, the organization decided it was time for another reset and general manager Joe Douglas, who did not draft Darnold, traded him to Carolina on April 5.

Neither of the two quarterbacks on the Jets’ roster, third-year player Mike White and 2020 fourth-round pick James Morgan, have ever appeared in an NFL game. Thus, it would be a surprise if Wilson is not the opening-day starter, barring something unforeseen.

Wilson threw for 3,692 yards and 33 touchdown passes with only three interceptions as a junior for the Cougars (11-1) last season, and wowed people at his pro day on March 26 with his strong right arm. His mobility and arm strength are not issues, but there are questions about the level of competition he faced last season, when BYU didn’t play any Power Five teams.

Wilson had surgery on his right (throwing) shoulder prior to the 2019 season and then missed five games during the season because of an injury to his right hand. But he didn’t miss any time in 2020 and the Jets obviously are satisfied with the medical reports they have on him. His ability to throw on the run should make him a good fit in the San Francisco-style offense being installed by new coordinator Mike LaFleur, whom head coach Robert Saleh brought with him from the 49ers.

Wilson feels that way, too.

“I think it’s so similar to BYU,” Wilson said, referring to the Jets’ new Kyle Shanahan-style attack, noting it has “tons of shifts (and) motion, a little bit of pro-style under center, pushing the ball down the field (and) play-action passing. If I could write exactly the offense I’d want to play in it would be right there.”

During his injury-wracked sophomore season in 2019, Wilson and the Cougars faced four Power 5 teams and the results were mixed for both Wilson and his team. He completed 86 of 137 attempts for 997 yards and three touchdowns with three picks as the Cougars defeated Tennessee and USC, both in overtime, and were routed by arch-rival Utah and Washington. In the victory over the Volunteers, Wilson completed a 64-yard pass in the waning seconds of regulation to set up the field goal that forced overtime.

Wilson actually had to compete for the BYU starting job in 2020 training camp, one reason why he initially wasn’t named a team captain, although he eventually became one in place of an injured teammate who was lost for the season. This raised character concerns, and although he wasn’t asked about that Thursday, Wilson said when asked to describe himself, that the Jets will get “someone that’s going to give everything they have.”

HANOVER, N.H. — Sirey Zhang, a first-year student at Dartmouth’s Geisel School of Medicine, was on spring break in March when he received an email … END_OF_DOCUMENT_TOKEN_TO_BE_REPLACED

VLACHOVICE-VRBETICE, Czech Republic — For nearly a century, local residents have wondered at the strange comings and goings at a sealed-off camp … END_OF_DOCUMENT_TOKEN_TO_BE_REPLACED

That’s changing. The Biden administration and its allies are pushing the notion that caring for children — and the sick and the elderly — is just as … END_OF_DOCUMENT_TOKEN_TO_BE_REPLACED