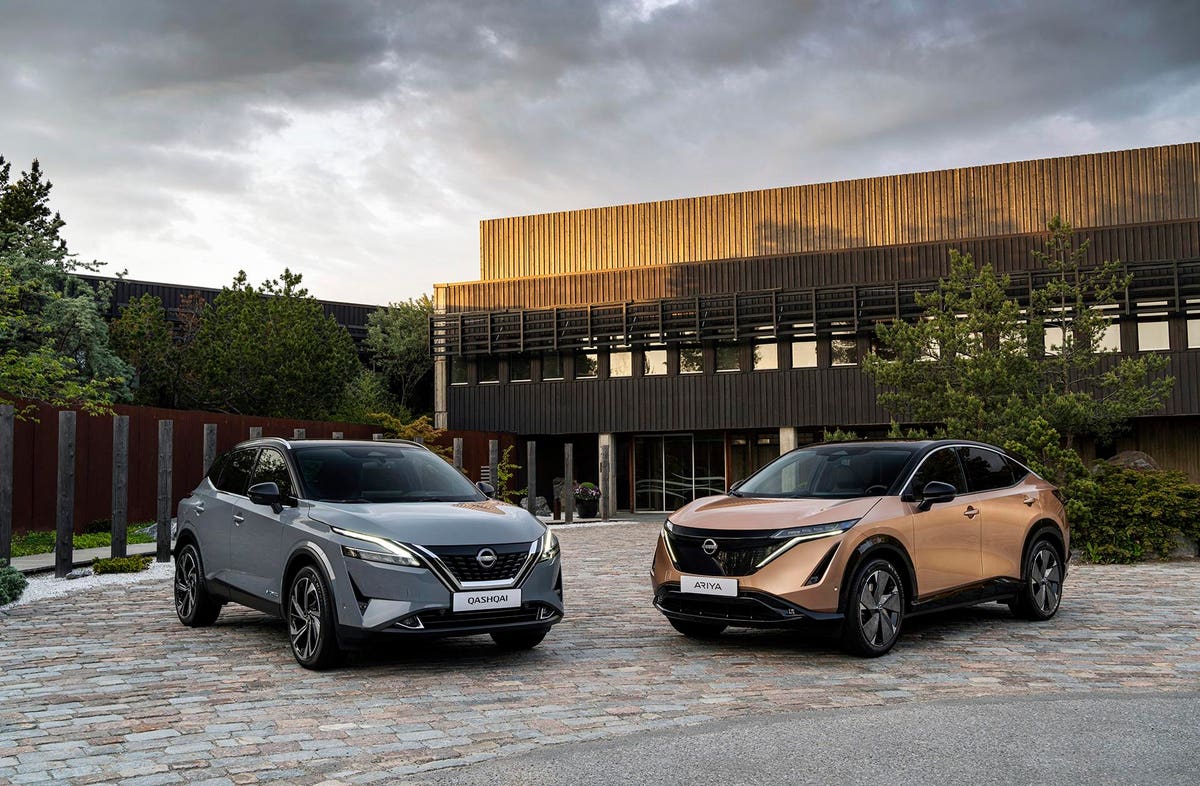 Nissan was one of the early pioneers of the electric car. The Leaf has now sold over 600,000 units worldwide since its launch in 2011 and is still going strong. So it has been surprising that no new EV arrived from Nissan amidst the rapid explosion in the EV market in the last few years. Until now. The Japanese giant has launched not one, but two EVs at the same time (although one isn’t quite). I got to drive both at the Stockholm, Sweden launch.

The star of the event was the Ariya, an all-electric crossover that is a little shorter in length and height than the Nissan X-Trail but otherwise in the same class. This has been one of the most anticipated EVs since it was revealed a few years ago, due to Nissan’s leading status in the EV market. It was worth the wait. This is a pure EV platform that takes advantage of most of the benefits of not having a fossil fuel legacy to cater for. The interior is spacious, the driving is smooth, and the use of materials both inside and out is a cut above the norm for Nissan. Not that Nissans are cheap, but the Ariya has a premium feel about it I’ve not seen in previous cars from the brand.

Since the Ariya’s launch back in 2020, Nissan has streamlined its offering from five drivetrain options down to an initial three, with just two trim levels. There is a front-wheel-drive version with a 215hp motor and 63kWh battery (which I drove), another front-wheel-drive version with a 239hp motor and 87kWh battery, and an all-wheel-drive e-4ORCE version with the 87kWh battery and 302hp. The WLTP range is much better than promised at launch. The 63kWh FWD version can go 250 miles and the 87kWh FWD version 329 miles, which drops to 310 miles with the AWD version. The simpler options are welcome, although a Performance AWD version with 389hp is still on the cards in the future.

The Ariya is well equipped for long journeys in terms of range, and its charging capabilities are too. A surprise for existing Leaf owners will be that in Europe the Ariya has a CCS charging port, not the Type 2 / CHAdeMO combo of the earlier car. I was told that in Japan the Ariya has both configurations. The CCS connection will let the car take advantage of the rapidly expanding rapid DC charging network, and speeds up to 130kW are supported. This enables the 63kWh battery to replenish to 80% in 28 minutes, while the 87kWh batter takes only a little longer at 30 minutes, thanks to a higher rate across the charging curve.

Previous Leaf owners will also be pleased to note that the battery is now liquid cooled, and comes with the typical eight-year, 100,000-mile warranty. Another plus is that 22kW AC charging is standard on the 87kWh cars and an option on the 63kWh one. If you do have access to this, you can recharge to 100% in just 3.5 hours for the 63kWh battery and 5 hours for the 87kWh one. On a regular 7.4kW wall box the times are more pedestrian – 10 hours and 13.5 hours respectively.

The interior cabin is spacious. Nissan claims it was aiming for a “lounge-like” experience, and this has mostly been achieved. Although the Ariya is a little smaller than the X-Trail, it has comparable room inside. The front seats are comfortable, with lots of headroom and an uncluttered interior. The rear seats have plenty of kneeroom, although the slightly slanted back will mean if you’re over six feet tall it will start to feel tighter. The sunroof does help with the sense of space here.

There are just two trim levels on offer – Advance and Evolve. The Advance still comes with LED lighting all round, heated folding mirrors, and even a hands-free powered tailgate. It has a heat pump and Nissan’s ProPILOT safety system with Navi-Link and auto parking ability. The Evolve adds that lovely panoramic sunroof, a central console that has a motorized system for sliding it forwards and backwards, and premium Nappa leather seat upholstery. Both trims have a 360-degree parking camera. There isn’t really a “poverty” spec version, with both trims providing plenty of equipment.

The luggage capacity on the FWD cars is capacious, too. For some reason, the right-hand-drive cars have 2 liters less than the left-hand-drive ones, but 466 liters is commendable, and if you drop the rear seats down you get 1,711 liters. The AWD car has a bit less due to having a motor in the back, so offers 408 liters, or 1,653 liters with the rear seats down. This is beyond a compact estate car / station wagon, and close to what a larger SUV such ask Skoda’s Enyaq iV has to offer. The X-Trail is bigger, and the Tesla Model Y a lot bigger.

Nissan claims to have spent a lot of time tuning the way the Ariya drives. I only had the 63kWh FWD version to try, but it felt as responsive as you expect from an EV. This version takes 7.5 seconds to reach 62mph, and the heavier 87kWh FWD model is only 0.1 seconds slower, thanks to its more powerful motor. The AWD e-4ORCE takes 5.7 seconds, which is a little faster than AWD competitors from Volkswagen, Audi and Skoda, but slower than the Hyundai IONIQ 5 and Kia EV6 AWD options. The Performance version, when it arrives, promises 5.1 seconds to 62mph, which is close to the Tesla Model Y Long Range and Volvo XC40.

Handling is the right blend of precise and cushioned. The weight distribution is close to 50:50 for the FWD car and exactly 50:50 for the AWD one. The FWD Ariya isn’t exactly a sporty drive, but it is about where you want it for a family crossover SUV. There isn’t any delay in the steering, and the car is confident enough under acceleration. There are three drive modes – eco, normal and sport – and there’s a B-mode with greater regeneration. You can also enable e-pedal, as with the Nissan Leaf, for complete single-pedal driving, although this makes the regeneration quite fierce. Best of all, the Ariya is extremely comfortable for long journeys, making it a great choice for commuting or family trips.

In the UK, prices start at £43,845 ($52,700) for the 63kWh FWD Advance model, going up to £56,290 ($67,600) for the 87kWh AWD e-4ORCE Evolve with 389hp. Prices are much cheaper (and trims different) in the USA, starting at $45,950. This makes the Ariya not a cheap option, with the Kia Nero EV for example considerably lower in price (albeit a smaller car). But the Ariya is a premium vehicle and priced about as you would expect. It’s a well-rounded car that will tick most boxes as family transportation. It’s sure to be a success.

However, even if the Ariya is the star for the future, the other release this week is likely to be the bigger seller right now. The e-POWER is the latest in Nissan’s hugely successful Qashqai range, which arrived in 2006 and arguably defined the “crossover” format. From a driver’s perspective, it’s a hybrid, because it has a 1.5 liter turbocharged variable compression ratio petrol/gasoline engine and you must refuel that, with no option to plug in. But it’s not actually a hybrid, because this engine does not drive the wheels directly. These are exclusively driven by an electric motor.

It’s not a range extender, either, because the battery is only 2.1kWh in size, only slightly larger than a hybrid’s. The fossil fuel engine does recharge this alongside regenerative braking, but the engine also supplies electricity directly to the motors as well. However, the fact it is acting as a generator means it can run more efficiently, giving the Qashqai e-POWER a combined 53.5mpg (44.5 miles per US gallon), which isn’t as efficient as some compact hybrids, but for a crossover SUV that can hit 62mph in 7.9 seconds, it’s good. It also appeared to suffer less in urban traffic than any conventional fossil fueled car.

That’s the key thing about the Qashqai e-POWER. Apart from the occasional hint that there is an internal combustion engine somewhere (although Nissan has tuned this for as little sound as possible and added noise cancellation), this car drives exactly like an EV. It has a B-mode and an e-pedal option, like the Leaf and Ariya. There are no gears and immediate torque, with very smooth power delivery. You could almost say that it was designed to get people hooked on driving an electric car, so they will be more susceptible to choosing one when they are less worried about charging it and they are cheaper.

That appears to be the point, and why Qashqai e-POWER is a bit of a genius move. It is about £4,000 ($4,800) more expensive than the cheapest Qashqai at each trim level with a conventional powertrain. But it’s also at least 25% more efficient, and much nicer to drive. The Qashqai e-POWER may be a stopgap for those not ready to face the frustration of public charging, and if you do have home charging or easy access to a public charger, the more expensive Ariya is a big step up and the preferable choice. But the Qashqai is a cash cow. I can see the Qashqai e-POWER selling well and hopefully, in the process, luring more buyers over to full battery-electric with their next car purchase. Nissan is back in the electric driving seat.

MIAMI--(BUSINESS WIRE)--Intelli Smart Homes, the leading smart home technology company, has been recognized as one of America’s fastest-growing … END_OF_DOCUMENT_TOKEN_TO_BE_REPLACED

Customers outside a Walmart store in Torrance, California, US, on Sunday, May 15, 2022. Walmart Inc. is scheduled to release earnings figures on May … END_OF_DOCUMENT_TOKEN_TO_BE_REPLACED

The past few years have been brutal on homebuyers' budgets. Would-be buyers have been priced out of some of the most desirable neighborhoods thanks to … END_OF_DOCUMENT_TOKEN_TO_BE_REPLACED