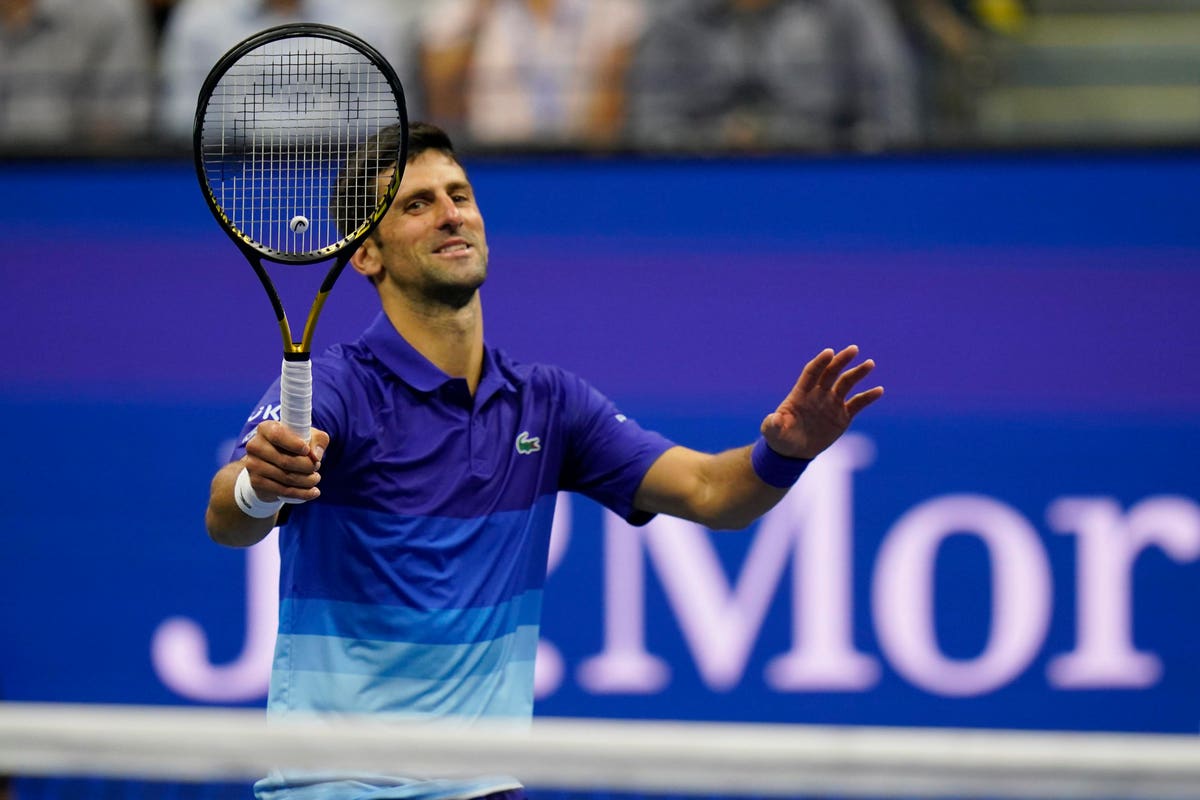 Two down, five to go for Novak Djokovic.

The world No. 1 from Serbia advanced to the third round of the U.S. Open on Thursday night and now stands just five match-wins from joining an exclusive club of Grand Slam champions.

Djokovic, 34, is seeking to become the first man since Rod Laver in 1969 and the sixth tennis player ever to capture all four major titles in the same calendar year. If he wins the title on Sept. 12, he would also surpass rivals Roger Federer and Rafael Nadal with a men’s record 21st major title.

After disposing of Dutch No. 1 Tallon Griekspoor, 6-2, 6-3, 6-2, in Arthur Ashe Stadium, Djokovic gave a wide-ranging, in-depth interview with ESPN’s Chris McKendry in which he touched on several subjects, including the “mental advantage” he feels he has over many opponents, the “excitement” and “pressure” he’s feeling in New York and how Federer and Nadal helped put him in this position.

“Most of the opponents that you get to play if you’re at the top of the game, you know that already before coming into the match, you have a mental advantage,” Djokovic, winner of eight of the last 12 major titles, said after his 23rd straight Grand Slam victory of 2021.

“But at the same time, it can go [the] other way where they don’t have much to lose and you’re too stressing about expectations and stuff that are going around the court. Pressure, we all have it, but top guys, especially for me here with pressure on the line. Pressure is huge but at the same time I thrive on that. I like that because there’s a sign ‘Pressure is a privilege’ — a quote by Billie Jean [King] — and I truly believe and I live by that. So it’s an honor to be in this situation.”

Djokovic next faces Kei Nishikori of Japan, who took out American Mackie McDonald in five tough sets. Djokovic is 17-2 against Nishikori, although the Japanese star beat the Serb in the 2014 U.S. Open semifinals en route to the final. Djokovic beat Nishikori, 6-2, 6-0, in their last meeting in the quarterfinals of the Tokyo Olympics before Djokovic lost to Sascha Zverev in the semis.

“We had some battles, particularly on the hardcourts,” Djokovic said.

Going forward, Djokovic could face No. 6 Matteo Berrettini, the Wimbledon runner-up, in the quarterfinals, Olympic gold medalist Zverev in the semis and potentially world No. 2 Daniil Medvedev in the final.

Medvedev said his goal is to prevent Djokovic from winning the Grand Slam.

Against Griekspoor, Djokovic was heckled by a few fans and seemed distracted at times. In his first-round match against 18-year-old qualifier Holger Rune, fans cheered “Rune” and against Djokovic.

The Serb said it’s important to “stay in the zone” and to not to get distracted by anything — presumably including the fans — during his pursuit of history.

“It’s important to bounce back very quickly, not to allow this distraction to last for a long time because tennis is a game of nuances,” he said. “Very few details and moments can decide a winner.”

Still, Djokovic is focused on the task at hand and keen to make history. He said he recently went to Forest Hills, site of the old U.S. Open, and felt “really inspired.”

“It’s important to know the history as a tennis player because they’ve built the foundation that we are standing on today,” Djokovic said. “Being only in the conversation with Rod Laver, with Martina, with Serena, with Billie Jean, the all-time greats of our sports is really an honor for me. I try to draw strength and motivation from that…

“Of course with history on the line, the excitement grows, the pressure grows, but experience and understanding of what I have ot do on a daily basis in order to reach the goal allows me to still be in the tournament.”

Djokovic added that tennis is a “magnificent” sport and that “I think it’s the third most popular sport on the planet, over a billion people watch it, I’ve seen some stats. I guess they’re accurate, hopefully.”

“It’s just amazing to be on a Grand Slam,” he added. “Grand Slams are historically the ones that have mattered the most for us so I’ve been really fortunate to play my best tennis in Grand Slams over the years.”

Djokovic has previously won the “Nole Slam” in 2016 when he held all four majors at once after winning his first Grand Slam.

“That’s where I first felt, OK this is reachable, it’s achievable. I can even do it in one year,” he said. “I always believed that I have a very good chance to win every Slam on every surface because I developed over the years my game to be really an all-around game that can adapt to any game or any conditions.

“But in that moment, where I won French in 2016, it’s where I really started to really believe that it can become a reality one day that I can win it all in one year. And Roger and Rafa did not manage to do that, but they were very close. Roger played finals of French Open a couple years and he won all the other Slams. Rafa as well. These two guys and their dominance on the tour have made me the player I am today, without a doubt.”

GREENVILLE, N.C.--(BUSINESS WIRE)--Employers aiming to win the war on talent have a new “A” team to tap into: college and professional athletes. … END_OF_DOCUMENT_TOKEN_TO_BE_REPLACED

Mortgage rates are likely to rise in July, extending a seven-month streak. High inflation, and the Federal Reserve's efforts to control it, have … END_OF_DOCUMENT_TOKEN_TO_BE_REPLACED