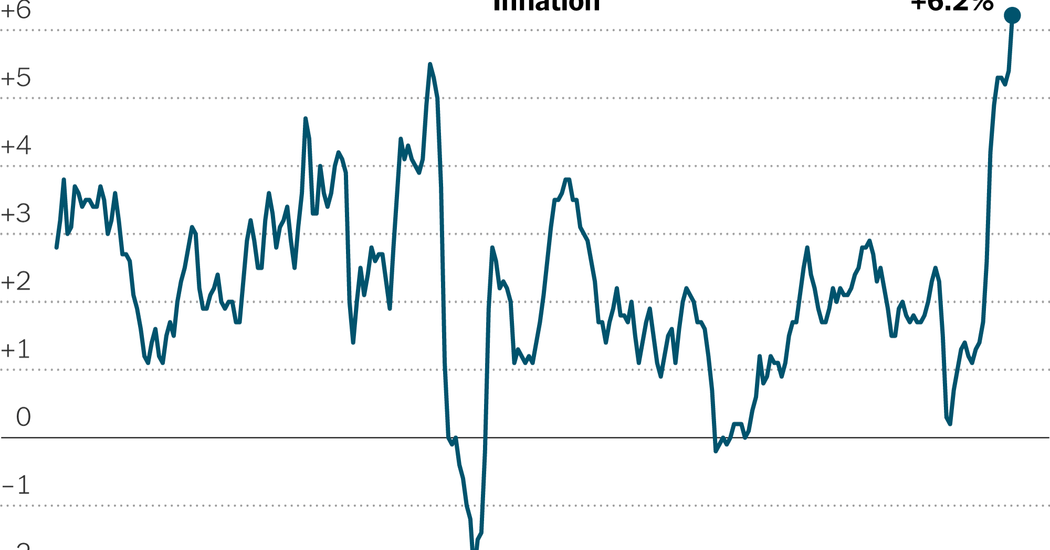 Consumer prices surged at the fastest pace in more than three decades in October as fuel costs picked up, supply chains remained under pressure and rents moved higher — worrying news for economic policymakers at the Federal Reserve and for the Biden White House.

Overall prices rose 6.2 percent over the past 12 months, the fastest pace since 1990, and inflation began to accelerate again on a monthly basis.

Prices rose across the board in October, at deli counters and restaurants and car dealerships. The acceleration is an unwelcome development for the Biden administration, which had continually pointed out that while price gains were faster than usual, they were slowing down from rapid summertime readings. It is also a policy challenge for the Fed, which is charged with maintaining stable prices and fostering maximum employment.

Inflation rates remain far faster than the 2 percent annual gains the Fed aims for on average over time. While the Fed sets its goal using a separate measure of inflation — the Personal Consumption Expenditures index — that, too, has picked up sharply this year. The C.P.I. reports come out faster, and help feed into the central bank’s favored gauge, so they are closely watched by economists and Wall Street investors.

expressing concern about the impact more federal spending could have on inflation.

Part of the dilemma is that inflation is not moderating, as many economists had expected it would by the end of 2021. Instead, it jumped to 0.9 percent last month from September, a Labor Department report showed, faster than the prior month’s increase of 0.4 percent and well above economists’ expectations. So-called core prices, which strip out products like food and fuel, also climbed more quickly.

Administration and Fed officials alike have maintained that rapid inflation should eventually fade. But they have had to revise how quickly that might happen: Supply chains remain badly snarled, and demand for goods is holding up and helping to fuel higher prices. As wages begin to rise in many sectors amid labor shortages, there are reasons to expect that some businesses might charge their customers more to cover climbing worker costs. October’s data did nothing to alleviate that growing sense of unease.

Shortages of used and new cars have sent prices skyrocketing, supply chain issues have made furniture costlier, labor shortages are raising some service-industry price tags, and rents are rising after a weak 2020. In the headline data, food and fuel prices have picked up sharply.

“It’s obviously getting uncomfortable for the Fed,” she said.

Officials have avoided overreacting to an inflation surge driven by supply chain problems, worried that doing so would hurt the economy unnecessarily. If the trends persist, they will most likely come under growing pressure to hasten their plans to pull back economic support by ending their stimulative bond-buying program and raising interest rates from rock bottom sooner and more quickly.

Mary C. Daly, president of the Federal Reserve Bank of San Francisco, said inflation had been “eye popping” but cautioned that the Fed was also paying attention to the many jobs still missing from the labor market. In an interview with Bloomberg Television on Wednesday, Ms. Daly said it was too soon to suggest that officials would need to speed up their process of slowing — or tapering — monthly bond purchases beyond the pace the Fed announced last week. Tapering that buying is a precursor to rate increases.

“It would be very premature to start asking whether we should quicken the taper,” Ms. Daly said.

Markets took note of the inflation figures, with stocks slowly sinking throughout the day. A key measure of the bond market’s expectations for inflation over the next five years rose to a new high of 3.10 percent shortly after the report was issued. That means investors expected inflation to average about 3 percent a year for the next five years, essentially, far higher than any time in the decade before the pandemic hit.

investors have come to more heavily expect a rate increase by the central bank’s meeting in June 2022.

For policymakers and investors alike, it is difficult to predict when price jumps might moderate. Many are intertwined with the reopening of businesses from state and local lockdowns meant to contain the coronavirus; the economy has never gone through such a widespread shutdown and restart before.

But officials have become wary that uncomfortably high inflation might linger. Consumers have been increasing their expectations for future price gains. Households expecting to face climbing grocery, department store and gas bills might demand pay raises — setting off an upward cycle in which wages and prices push one another ever upward.

Key measures of price expectations haven’t climbed into the danger zone yet, officials including Richard H. Clarida, the Fed’s vice chair, have said. And there are still reasons to believe that today’s price pop will fade. Households are sitting on huge savings stockpiles amassed during the pandemic, but should theoretically spend those down now that government support programs like expanded unemployment insurance have fully or mostly lapsed.

If demand moderates, it could open the door for a return to normal, as supply chains catch up. To the extent that suppliers have responded to this moment by ramping up their productive capacity, some prices might even fall.

Supply chain experts have been warning that some of the shortages driving up costs might get worse before they get better, especially headed into the busy holiday shopping season, which could further clog backed-up ports and understaffed trucking routes. The longer that prices for washing machines and electronics soar, the more risk there is that consumers will begin to plan for higher prices.

closely watched index that tracks wholesale vehicle costs. After that, they’re unlikely to actually fall; they will just increase less quickly than their current breakneck pace.

At #1 Cochran Subaru Butler County, a car dealership in western Pennsylvania, the general sales manager, Jim Adams, is offering a $500 bonus to customers who return leased vehicles early, and buying cars that people bring in for repairs. He is asked a few times a day when things might normalize.

“Until the manufacturers can get back up to speed, used car prices will continue to grow,” Mr. Adams said in an email.

As industries wait for balance to return, Republicans are pointing fingers at Mr. Biden and Democrats, saying the stimulus checks they provided to households and other pandemic-related benefits are responsible for the rise in prices.

The White House has tried to emphasize that prices are jumping while the country is staging a rapid economic rebound from a once-in-a-century disaster. And Mr. Biden has said his new policies, including an infrastructure bill that cleared Congress last week, will over time expand capacity and help to cool inflation.

But the president made clear on Wednesday that the onus for taming inflation rested with the Fed. “I want to re-emphasize my commitment to the independence of the Federal Reserve to monitor inflation, and take steps necessary to combat it,” Mr. Biden said in his statement.

At the Fed, some officials are already warning that the central bank may need to pull back economic support faster. Doing that could cool down prices by tempering demand, but would also weaken the job market when millions remain out of work compared with prepandemic employment levels.

recent news conference. “There is still ground to cover to reach maximum employment.”

Fed officials have been careful to acknowledge that high prices can be hard for consumers to absorb, especially for goods and services that households consume regularly.

Gasoline prices were 49.6 percent higher in October compared with a year earlier, and fuel oil, which is used for industrial and domestic heating, was up 59 percent.

Food at home cost 5.4 percent more this October than a year earlier, and some categories, including steak and bacon, posted gains in excess of 20 percent.

“I expect lots of eyeballs were bulging out of their sockets when they saw the number come in,” Seema Shah, chief strategist at Principal Global Investors, wrote in a note reacting to the October data. “Inflation is clearly getting worse before it gets better.”

Whether you optimistically hope that mortgage rates will decline or are resigned that rates will stay elevated above the historic lows of 2021, you … END_OF_DOCUMENT_TOKEN_TO_BE_REPLACED