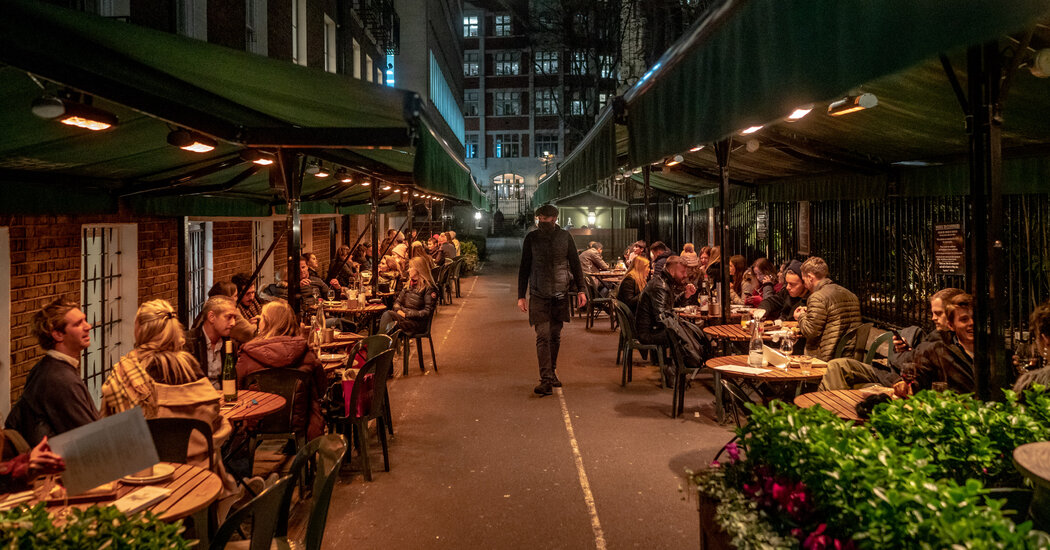 “You could feel Christmas was coming,” Amanda Whiteside, a manager at Gordon’s Wine Bar in London, said of the crowds and buzz. “And then it was gone.”

Throughout Britain and in other parts of Europe, new government restrictions combined with heightened anxiety over the highly contagious Omicron variant of the coronavirus have drastically reduced business at restaurants, pubs, event venues and stores, prompting urgent calls for additional government assistance.

In Britain, the government responded Tuesday, announcing 1 billion pounds ($1.3 billion) in aid for the hospitality industry, with one-time grants of £6,000 and rebates for employees’ sick leave.

The additional assistance was promised as a fresh wave of anxiety over the economy washes over the region. In France, government ministers announced Tuesday additional aid up to 12 million euros for travel agencies, events, caterers and indoor leisure companies that suffer big operating losses this month.

Spain, the government has scheduled an emergency meeting with regional leaders on Wednesday to discuss whether to adopt new restrictions. Italy’s government is meeting on Thursday.

“We are in a different phase now where lockdown will be potentially more costly,” said Claus Vistesen, chief eurozone economist at Pantheon Macroeconomics. “Up until now, we’ve been used to lockdowns followed by support from the government. I think that will be the case as well, but support will be more conditional, less comprehensive than before.”

Britain recorded the highest number of Covid-19 cases in Europe over the last seven days, according to the World Health Organization.

On Monday, organizations representing more than 100,000 businesses around the country sent an open letter to Prime Minister Boris Johnson, demanding more tax relief and grants to tide them over.

new requirements that customers must show proof of vaccination or recent recovery. And in the Netherlands, where the government announced a lockdown over the weekend, calls to the nation’s business registry asking for help climbed past 400 on Monday — seven times the number logged the previous Monday.

known as Plan B, on Dec. 8 as a response to Omicron, cancellations have been rolling in and foot traffic has disappeared in some areas.

At Gordon’s Wine Bar, it was common to find every table in its cavelike cellar and on its outdoor patio full and a long line of customers waiting. Then Plan B was put in place.

Customers thinned out, and several staff members got Covid, she said. Gordon’s is now offering only outside service, and Ms. Whiteside estimates that sales are down 25 percent.

Half a mile away, in Soho, the Coach and Horses pub was similarly contending with fewer customers and sick staff. Last week, business was off by a third, while on Monday it fell “off the edge of a cliff,” said Alison Ross, the manager.

Kaasbar Utrecht, is shuttered, and $100,000 at the cafe. Plans to rebuild a nightclub he owns that was burned in a fire in January have been postponed. He has had to let go most of his 80-person staff and is now trying to make money selling mulled wine in the streets and cheese packages door to door.

Mr. Waseq said that because he opened his business after the pandemic began and did not have 2019 sales to use as a benchmark comparison, he was not eligible for government assistance.

Ron Sinnige, a spokesman for the national business registry, the Kamer van Koophandel, said the agency was flooded with calls this week asking about financial assistance, advice or liquidating their operations. Some were seeking guidance on how to qualify as an essential business — could a clothing store sell candy and soda, could a beauty salon offer postsurgical massages or list Botox injections as a medical procedure?

The questions were a sign of people’s creativity and despair, Mr. Sinnige said. “As opposed to previous lockdowns, people are really at the end of their financial flexibility and emotional flexibility,” he said.

France has canceled a menu of year-end celebrations and barred tourists from Britain, a blow to the ski industry.

On Tuesday, the Swedish government imposed some new restrictions that included allowing only seated customers to be served in restaurants and bars.

Ireland imposed an early curfew of 8 p.m. on restaurants and bars that began on Monday, while limiting attendance at events.

In Denmark, restaurants and bars must cut off serving alcohol after 10 p.m., and a slate of venues and event spaces including ​​theaters, museums, zoos, concert halls and Tivoli, Copenhagen’s landmark amusement park, have been closed.

Switzerland’s restrictions that bar unvaccinated people from going to restaurants, gyms and museums are expected to last until Jan. 24.

In Germany, the check-in process at stores, which requires stopping everyone at the door and asking to see vaccination certification and an ID, was deterring shoppers at what would normally be the busiest time of the year, the German Trade Association said.

Retailers surveyed by the group reported a 37 percent drop in sales from Christmas 2019.

“After months of lockdowns, the restrictions are once again bringing many retailers to the edge of their existence,” said Stefan Genth, head of the Trade Association.

A court in the northern state of Lower Saxony last week threw out the restrictions there, after the Woolworth department store chain challenged them on grounds that they were not fairly applied and that requiring shoppers to wear masks provided sufficient protection. The ruling on Thursday raised hopes that other states would follow its lead, giving a final boost to last-minute shoppers.

“Last weekend was better, but overall the shopping season has been more than depressing,” said Mark Alexander Krack, head of the Lower Saxony Trade Association.

Many property purchasers in Alaska possess the same vision: Either hunker down away from the madding crowds in a refined log cabin or operate a … END_OF_DOCUMENT_TOKEN_TO_BE_REPLACED