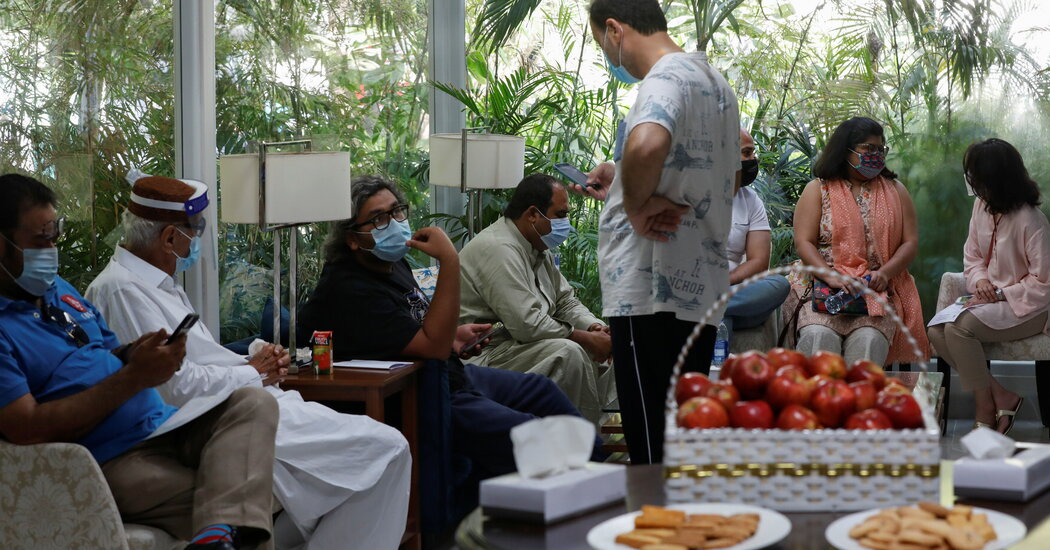 ISLAMABAD, Pakistan — The coronavirus was ripping through Pakistan, and Muhammad Nasir Chaudhry was worried. Long lines and tight supplies plagued the government’s free vaccine campaign. Newspapers were filled with reports of well-connected people jumping the line for a free dose.

Then Mr. Chaudhry, a 35-year-old government consultant, discovered he could pay to leapfrog the long lines himself. He registered to take two doses of the Russian-made Sputnik V vaccine for about $80 from a private hospital. That’s a lot of money in a country where the average worker makes about $110 per month, but Mr. Chaudhry was ready to make the commitment.

Critics have assailed such private sales in Pakistan and around the world, saying that they make inoculations available only to the wealthy. But in Pakistan, like elsewhere, tight supplies have stymied those efforts. The private hospitals are out of supplies, and Mr. Chaudhry still hasn’t been vaccinated.

“I am willing to pay double the price for the vaccine, but I don’t want to wait on and on,” Mr. Chaudhry said.

bought up most of the world’s vaccine supplies to protect their own people, leaving millions of doses stockpiled and in some places unused. Less developed countries scramble over what’s left.

To speed up vaccinations, some countries have allowed doses to be sold privately. But those campaigns have been troubled by supply issues and by complaints that they simply reflect the global disparities.

blocked them over fears that counterfeit vaccines would be sold. In the United States, some well-connected companies, like Bloomberg, have secured doses for employees.

can’t find vaccines to buy. Demand has been strong. The government sets a ceiling on prices but has been locked in a dispute with private importers over how much that should be.

In April, in the city of Karachi, long lines formed when two private hospitals began selling the Sputnik V vaccine to walk-ins. Private hospitals in Islamabad, the capital, and Lahore faced a similar rush of people and ran short within days. Hospitals in the major cities have now stopped taking walk-ins, and online registration has also been put on hold.

Sputnik V isn’t the only vaccine that the government allows to be sold privately. A one-dose shot made by CanSino Biologics of China is priced at around $28. Demand has been weaker because of greater public confidence in the Russian vaccine. Still, supplies sold out quickly after the CanSino doses went on sale last month. The government has said another 13.2 million doses will arrive in June.

AGP Limited, a private pharmaceutical company that has imported 50,000 doses of Sputnik, is urging patience.

“Sputnik V received an overwhelming response in Pakistan with thousands of people being vaccinated in just a few days and an even higher number of registrations confirmed in hospitals across Pakistan,” said Umair Mukhtar, a senior official of AGP Limited. He said the company has placed large orders for more.

The government price dispute could delay further expansion. The drug regulatory authority wants Sputnik V to be sold at a lower price. AGP won an interim court order on April 1 to sell the vaccine until a final price is fixed.

For those who can afford the doses, frustration is growing. Junaid Jahangir, an Islamabad-based lawyer, said several of his friends got private inoculations. He registered with a private lab for Sputnik V but got a text message later saying that the vaccination drive was on hold.

“I am being denied a fair chance to fight this virus if I end up getting infected,” Mr. Jahangir said. “The demand is there, and I don’t see what could possibly be the reason behind the inefficiency in supply.”

Some of the people who paid for private doses justified their decision by citing media reports that some well-connected people were jumping the line to get free, public doses. In May, at least 18 low-level health care workers were suspended by the authorities in Lahore for vaccinating people out of turn after taking bribes.

Iffat Omar, an actor and talk show host, apologized publicly in April for jumping ahead of the line to get the vaccine. “I am sorry,” she said on Twitter. “I am ashamed. I apologise from the bottom of my heart. I will repent.”

Fiza Batool Gilani, an entrepreneur and the daughter of Yusuf Raza Gilani, the former prime minister, said she knows of several young people who jumped the queue and got the free government vaccine in recent weeks.

“I was myself offered out of turn, free vaccine, but I declined as I wanted to avail the private vaccine,” said Ms. Gilani. Wealthy people should pay for their doses, she said, adding that her family would pay for CanSino shots for its household staff.

Many people, like Tehmina Sadaf, don’t have that option.

Ms. Sadaf, 35, lives along with her husband and a seven-year old son in a working-class neighborhood on the outskirts of Islamabad. Her husband is a cleric at a mosque. She gives Quran lessons to young children. She said the pandemic had negatively impacted the family’s income of around $128 per month. “After paying the house rent and electricity bill, we are not left with much,” she said.

She had her doubts about the public vaccine, “but the price of the private vaccine is very high,” she said. “It should have been lower so that poor people like us can also afford it.”

J.T. Brown #23 of the Tampa Bay Lightning skates into goalie Henrik Lundqvist #30 of the New York Rangers during the second period in Game Six of the … END_OF_DOCUMENT_TOKEN_TO_BE_REPLACED

The Mississippi River town of Ste. Genevieve, MO, might be the ideal spot for a buyer in search of a refreshing idea.This mixed-use structure on the … END_OF_DOCUMENT_TOKEN_TO_BE_REPLACED