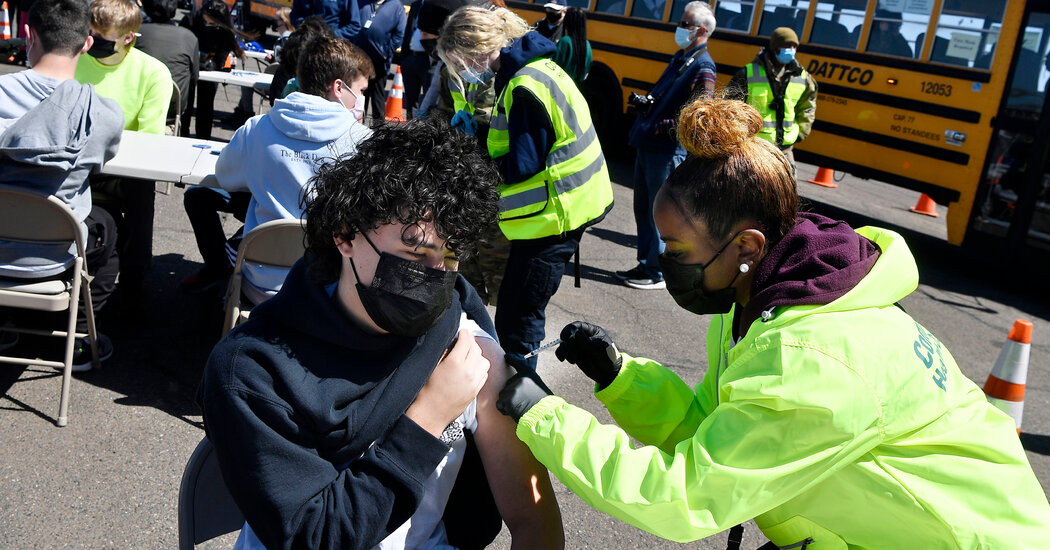 The American public’s willingness to get a Covid vaccine is reaching a saturation point, a new national poll suggests, one more indication that achieving widespread immunity in the United States is becoming increasingly challenging.

Only 9 percent of respondents said they hadn’t yet gotten the shot but intended to do so, according to the survey, published in the April edition of the Kaiser Family Foundation’s Vaccine Monitor. And with federal authorization of the Pfizer vaccine for adolescents ages 12 through 15 expected imminently, the eagerness of parents to let their children be vaccinated is also limited, the poll found.

Overall, slightly more than half of those surveyed said they had gotten at least one dose of the vaccine, a finding that matches data from the Centers for Disease Control and Prevention.

“We’re in a new stage of talking about vaccine demand,” said Mollyann Brodie, executive vice president of Kaiser’s Public Opinion and Survey Research Program. “There’s not going to be a single strategy to increase demand across everyone who is left. There will be have to be a lot of individually targeted efforts. The people still on the fence have logistical barriers, information needs, and lots don’t yet know they are eligible. Each strategy might move a small number of people to get vaccinated, but all together, that could matter a lot.”

With a growing number of scientists and public health experts concluding that it is unlikely that the country will reach the threshold of herd immunity, the Biden administration has stepped up efforts to reach those who are still hesitant. On Tuesday, the administration announced steps to encourage more pop-up and mobile vaccine clinics and to distribute shots to primary care doctors and pediatricians as well as local pharmacies.

The survey also showed that confidence in the Johnson & Johnson vaccine had suffered a significant blow after the 10-day pause in dispensing it while the authorities examined rare incidents of life-threatening blood clots in people who had taken it. While 69 percent of people said they had confidence in the safety of the vaccines made by Pfizer and Moderna, only 46 percent felt confident about the safety of the Johnson & Johnson vaccine. Among adults who have not been vaccinated, one in five said that the news about the Johnson & Johnson shot had prompted them to change their minds about getting a Covid-19 vaccine.

The survey did show that there had been some progress among Republicans, who have been among the firmest holdouts. Among that group, 55 percent said they had gotten a shot or intended to do so, up from 46 percent in March. The percentage who will “definitely not” get the vaccine is shrinking as well, down to 20 percent from 29 percent in March.

The results were based on telephone surveys of a nationally representative sample of 2,097 adults from April 15 through April 29.

A consortium of universities that includes Harvard, Northeastern and Rutgers has been conducting online polls during the pandemic and recently focused on parents. The group’s latest survey, conducted throughout April and reaching 21,733 adults across 50 states, found that the divide between mothers and fathers in views about the vaccine for children had widened.

Fathers are becoming more accepting, with their resistance falling to 11 percent from 14 percent since February. But over a quarter of mothers, researchers said, still say they are “extremely unlikely” to vaccinate their children. Both genders are more resistant to the vaccine for younger children than for teenagers. Other research shows that mothers tend to have more sway over the final decision than fathers.

The responses from parents may well change over time, experts say. Just as adults were far more reluctant last summer when the vaccine was still a concept, parents surveyed several weeks ago, when imminent authorization for children under 16 had not been widely discussed, might also have been reacting to a hypothetical situation rather than a reality.

But pediatricians and others who are seen as trusted sources of information are already aware that they have considerable work to do to instill vaccine confidence in this latest cohort.

Dr. Sean O’Leary, a pediatrician in Denver who is vice chairman of the committee on infectious diseases for the American Academy of Pediatrics, predicted that just as adults had swarmed Covid vaccine providers during the initial weeks of distribution, parents and pent-up young teenagers would rush for it at the start, too.

But Dr. O’Leary, who often gives talks to pediatricians about how to motivate patients to accept vaccinations, worries that a slowdown will inevitably follow. To persuade hesitant parents, he said, “we have to make the vaccine available in as many places as possible.”

He added, “If parents and patients are in the pediatrician’s office and the doctor can say, ‘Hey, I’ve got it,’ that may be enough of a nudge for them to say, ‘Let’s go ahead and do this.’”

MUSCATINE, Iowa--(BUSINESS WIRE)--HNI Corporation (NYSE: HNI) announced today its Board of Directors declared a quarterly dividend of 32 cents per … END_OF_DOCUMENT_TOKEN_TO_BE_REPLACED

Tokyo (CNN) — The Japan Tourism Agency announced on Tuesday, May 17 that it would start allowing small group tours in May as part of a "test tourism" … END_OF_DOCUMENT_TOKEN_TO_BE_REPLACED

If you’re superstitious, today is your day.That's because it's Friday the 13th (the only one of the year, in fact). It's a day when bad juju reigns … END_OF_DOCUMENT_TOKEN_TO_BE_REPLACED