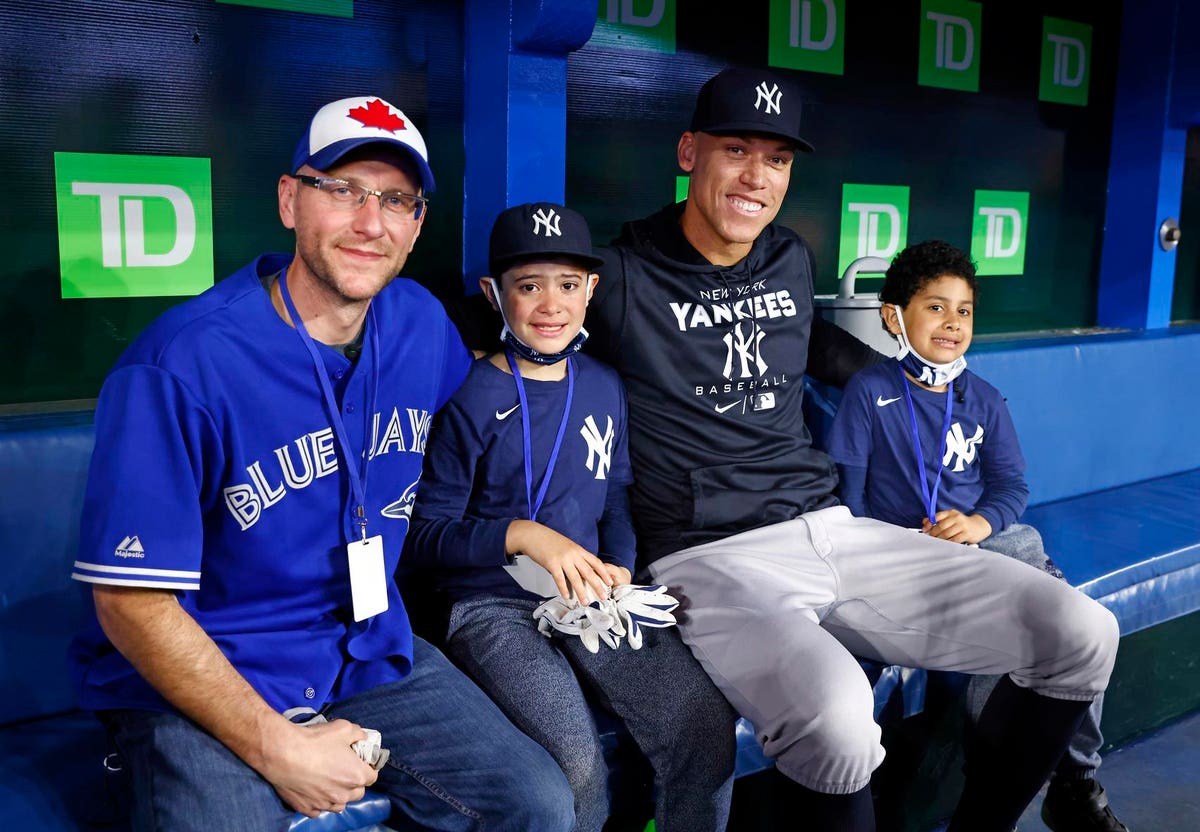 About a month ago Aaron Judge spent some fairly extensive time discussing the lack of progress on a contract extension, doing so before and after GM Brian Cashman disclosed exactly what was offered by the Yankees.

While it may have appeared acrimonious, what unfolded in Toronto between Judge and a pair of fans within the past 24 hours is among the feel good stories of the opening month of this season, especially with the Yankees, whose 11-game winning streak is a positive development for a team who entered the season with various uncertainties.

On Tuesday, Judge sent a ball skyward into the second deck of the left field seats, which is a challenging place for any hitter to hit home runs to even if you are 6-foot-7. The ball was cleanly caught by Blue Jays fan Mike Lanzillotta.

Instead of doing the foolish thing like throwing the ball back because a visiting player hit the homer, Lanzillotta gave the ball to Derek Rodriguez, a nine-year-old wearing a Judge t-shirt. He was already planning on giving a ball of any kind to the young fan but when Judge’s 427-foot drive came off the bat at 114.9 mph and soared in Lanzillotta’s direction it turned a routine adult giving a child the ball into a viral moment.

“I was so happy. All I can remember is I said thank you and I hugged him,” Rodríguez told reporters. “I brought it to school; my friends and teacher congratulated me. They all wanted to hear what happened. It was just amazing.”

Judge found out about the moment after his homer helped secure the Yankees’ 11th straight win in a streak that ended Wednesday night. Then he got to meet Rodriguez in an emotional scene that highlighted the pregame news.

“That still gives me goosebumps to this day to see little kids that are wearing my number and wearing my jersey,” Judge told reporters. “That’s something I dreamed of. I used to be in his position. I was that little kid rooting on my favorite players and team. So that was a pretty cool moment that I definitely won’t forget.”

“That’s tough to beat,” Yankees manager Aaron Boone said. “That’s one of those moments that warms your heart. One of the things that I appreciate in Major League sports is sportsmanship. When you see that from the fan bases that are battling it out; obviously two very good teams here … that was just a great moment of human beings interacting.”

And about an hour before the Yankees concluded their series in Toronto, both fans were giving press conferences on the field to reporters.

“Judge hit that ball right to us,” Lanzillotta said. “It couldn’t have been more perfect. I went to catch the ball and it hit off my hand; hit off my buddy’s face. I don’t know why the camera didn’t catch that part. I’ve watched every angle possible. I picked it up and the rest is history, right? That was probably one of the most memorable moments of my life.”

Considering the Yankees are two weeks removed from Judge and Giancarlo Stanton pleading with fans in the right field seats to stop throwing things onto the field after the final out of a win against the Guardians, it was a nice change from some of the moments involving fans that surface throughout the season.

Both fans had better seats Wednesday, which seemed fitting since they could see Boone get ejected in the eighth for arguing a series of called strikes to Judge that were low.

The heartwarming story is not ending at this point because when the Blue Jays visit the Yankees in August, both fans will be invited guests of the Yankees. Appropriately enough both fans were invited to sit in right field in the “Judge’s Chambers”.

It also occurred three weeks after Tampa Bay Rays outfielder Brett Phillips dedicated a homer against the Oakland Athletics to eight-year-old fan Chloe Grimes, who is dealing with her second battle with cancer. Phillips also homered after meeting the young fan, who gave him a bracelet that said: “Rally for Chloe, Our Princess Warrior.”

And since the homer, Phillips has kept in touch with the young fan and it’s a moment that made national broadcast news such as the CBS News Segment “On the Road” with Steve Hartman that airs every Friday.

There has been numerous notable moments such as Miguel Cabrera getting 3,000 hits, Dusty Baker getting 2,000 wins and five pitchers combining on the second no-hitter in Mets’ history. Those are moments fans always want to see but the meaningful interactions involving Phillips last month and Judge on Wednesday are also things most fans want to see more of.

SEATTLE--(BUSINESS WIRE)--(NASDAQ: RDFN) —The housing market turned a corner in April as the inventory crunch showed signs of easing, according to a … END_OF_DOCUMENT_TOKEN_TO_BE_REPLACED

We present a chance to live like Rocky Mountain royalty right in the heart of Denver. “You don't see a lot of castles in the middle of Denver—and this … END_OF_DOCUMENT_TOKEN_TO_BE_REPLACED