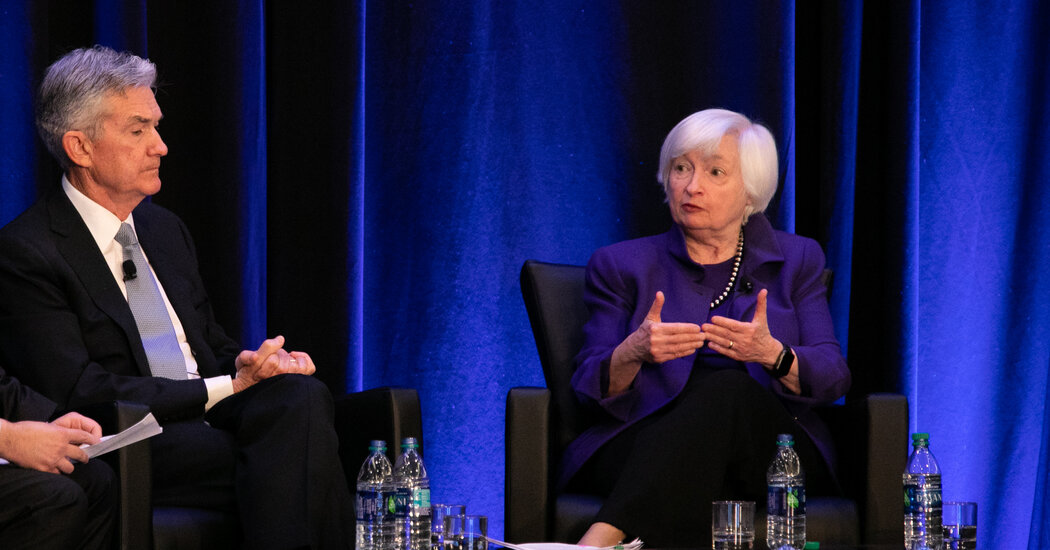 The economy is healing, the nation’s top two economic officials told lawmakers on Tuesday, but workers and businesses will need continued government support to rebound from the pandemic — and one of the officials, Jerome H. Powell, the Federal Reserve chair, batted back concerns that vigorous policy help could stoke inflation.

Mr. Powell testified Tuesday before the House Financial Services committee alongside Janet L. Yellen, his predecessor at the Fed and now the Treasury secretary, in their first side-by-side appearance in their current roles. In hopes of fueling a rapid rebound in spending and hiring, the government has been spending aggressively and the Fed is keeping borrowing costs at rock bottom.

That all-in approach has helped to avert the most dire potential economic outcomes, Mr. Powell told lawmakers, and it has not created grave inflation risks in the process.

Asked whether President Biden’s recently passed $1.9 trillion spending package to combat the virus could cause prices to shoot higher — especially as the administration eyes plans to spend as much as $3 trillion more on an infrastructure package — Mr. Powell said the Fed did not fear a jump in inflation.

administration’s plans to propose another big spending package on infrastructure, which could be financed in part by tax increases.

She was pressed by Republican lawmakers about how higher taxes would affect consumers and small businesses. “I think a package that consists of investments in people, investments in infrastructure, will help to create good jobs in the American economy,” Ms. Yellen replied, “and changes in the tax structure will help to pay for those programs.”

And she argued that tax increases would be necessary to back up the package.

“We do need to raise revenues in a fair way to support the spending that this economy needs to be competitive and productive,” she said.

“While the economic fallout has been real and widespread, the worst was avoided by swift and vigorous action,” he said.

Mr. Powell and Ms. Yellen faced a volley of questions on how financial regulators should deal with climate change risks. Republicans have expressed concern that the Fed’s growing attention to climate-related issues in its role as a bank overseer could end up making it harder or more expensive for carbon-heavy companies to get loans.

“It’s really very early days in trying to understand what all of this means,” Mr. Powell said, noting that many large banks and large industrial companies were already thinking about and beginning to disclose how climate might affect them over time. “We have a job,” he said, “which is to ensure that the institutions we regulate are resilient to the risks that they’re running.”

The new body will approach its task in a way that “considers the potential for complex interactions across the financial system,” Ms. Brainard said, rather than just the risks to individual companies.

That’s the kind of oversight some lawmakers fear.

“Linking hypothetical climate scenarios to risks to the entire financial system seems to me highly speculative,” Representative Andy Barr, a Republican from Kentucky, told Mr. Powell and Ms. Yellen during the Tuesday hearing.

Phil Shell loves the Bay Area and its real estate market. He’s been building his career here as an agent over the past eight years, but even he hasn’t … END_OF_DOCUMENT_TOKEN_TO_BE_REPLACED

DS4 Cross DS The Plug-in hybrid seems the perfect answer to the electric car dilemma; battery power for all your local needs and a traditional motor … END_OF_DOCUMENT_TOKEN_TO_BE_REPLACED